Walk to School Day kicks off US ‘Vision Zero for Kids’ 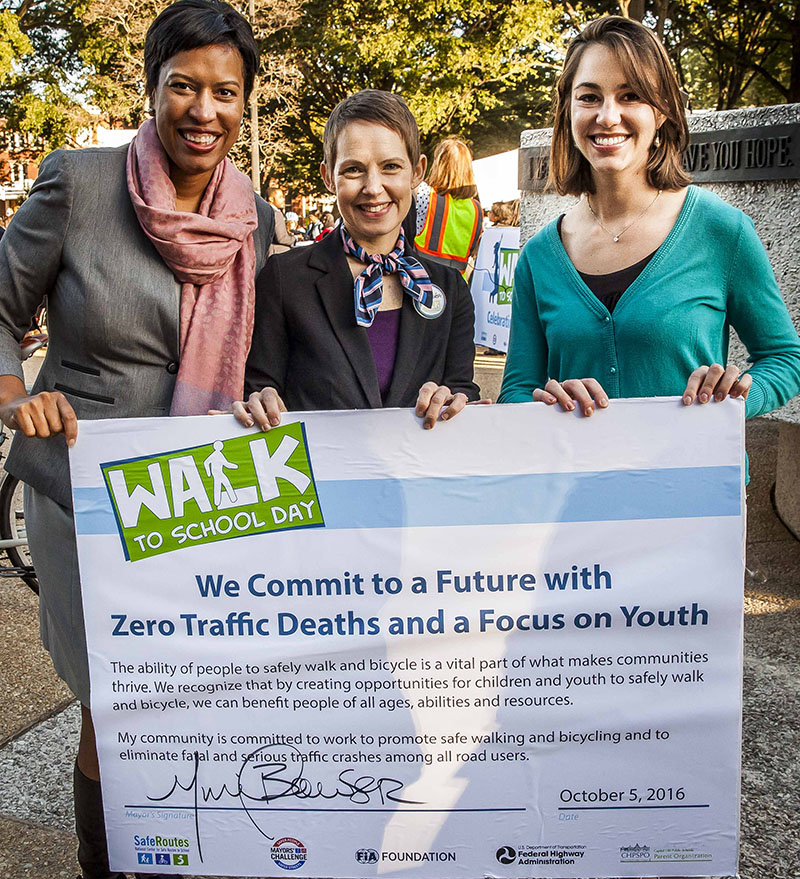 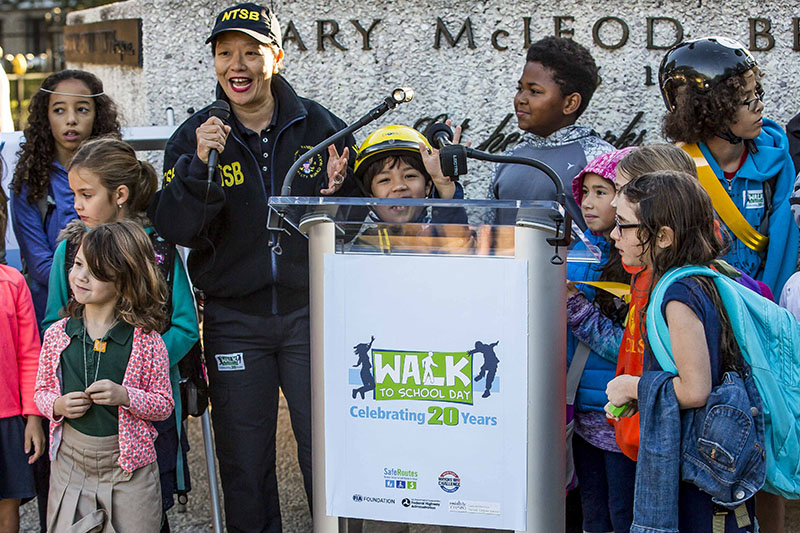 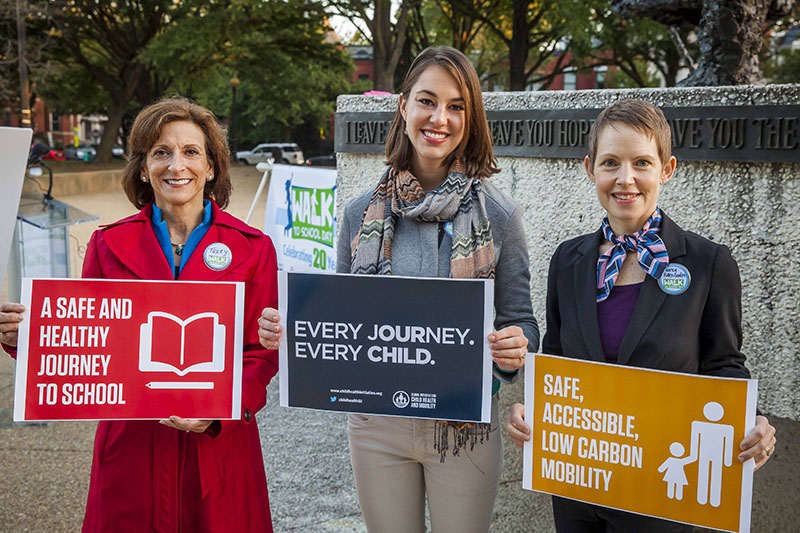 NHTSA Deputy Administrator Terry Shelton joins FIA Foundation’s Natalie Draisin and National Center for Safe Routes to School’s Nancy Pullen-Suefert in supporting the rights of the child advocated for by the Global Initiative for Child Health and Mobility. 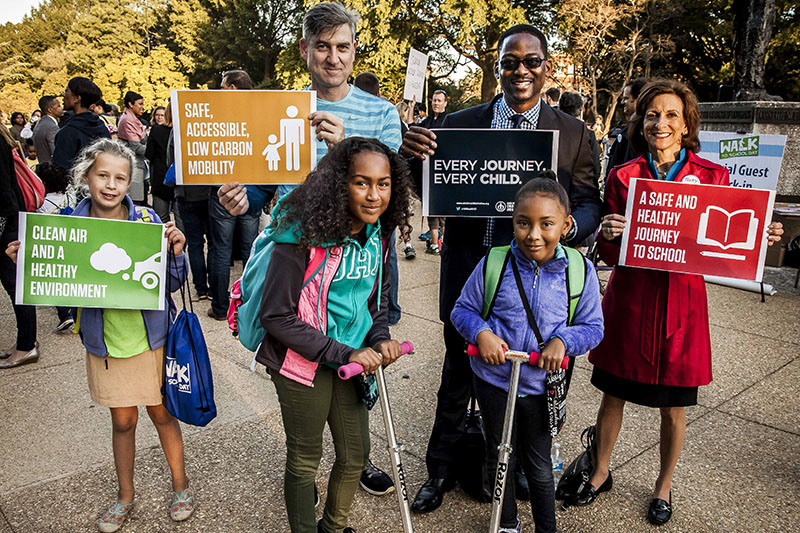 Children join Deputy Assistant Secretary for the Office of Global Affairs at the US Department of Health and Human Services Dr. Mitchell Wolfe joins Program Manager at US Federal Highway Administration Wesley Blount and NHTSA Deputy Administrator Terry Shelton to support the Global Initiative for Child Health and Mobility. 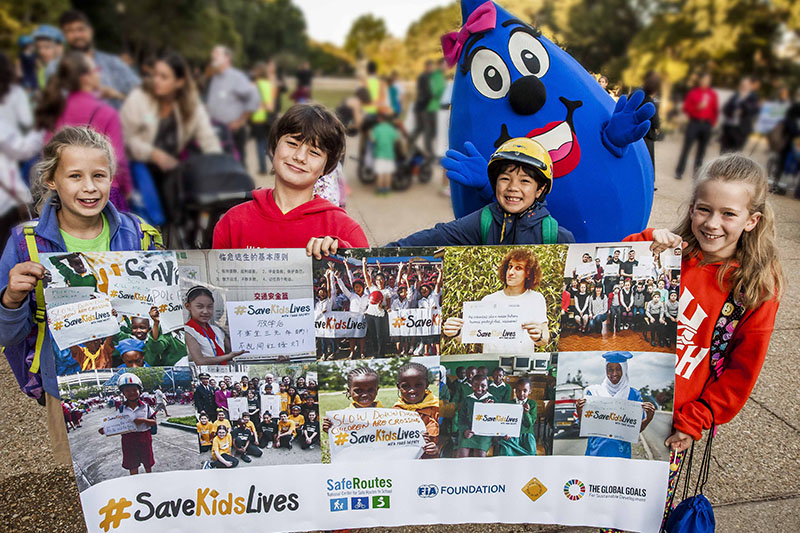 Local DC school children join over 1 million around the world in supporting the Save Kids Lives campaign.

At Walk to School Day in Washington, DC, the FIA Foundation and the US National Center for Safe Routes to School have announced a new youth-focused partnership to tackle traffic fatalities.

October 5, 2016 marked International Walk to School Day, a global event bringing together communities from over 40 countries, walking and cycling to school on the same day. In the US, thousands of schools from each state celebrated, reaching record-breaking participation among the 50,000 events held since the initiative began. In the nation’s capital, DC Mayor Muriel Bowser joined students from fourteen schools for the 20th anniversary of Walk to School Day.

The event also kicked off a partnership between the FIA Foundation and the National Center for Safe Routes to School to work with cities to implement Vision Zero for Kids. “Together, we’re pioneering an effort to support cities in focusing on youth to reach zero fatalities. We know that when we improve conditions for children, we’re making it safer for all ages and abilities,” said Nancy Pullen-Suefert, Director of the National Center for Safe Routes to School. The partnership also includes the USDOT Federal Highway Administration. The initiative has received guidance from the National Association of City Transportation Officials, the National League of Cities, the Vision Zero Network, and cities with strong pedestrian programs including Los Angeles, Miami-Dade County, New York City, Philadelphia, San Francisco, Seattle and Washington, DC. The partnership supports the work of the Global Initiative for Child Health and Mobility, with the goal of a safe and healthy journey to school for all children by 2030.

DC Mayor Muriel Bowser supported the initiative by signing a commitment to a future with zero traffic deaths and a focus on youth. Many communities are pursuing this strategy to implement Vision Zero and save lives on our roads. Such efforts represent key goals of USDOT’s Mayors’ Challenge for Safer People and Safer Streets.

US Transportation Secretary Foxx, a former mayor, recognized the unique role of city leaders in promoting pedestrian and bicycle safety. “We are proud to support Walk to School Day and help communities as they work to eliminate traffic fatalities and serious injuries.”

The goal to reach zero deaths was also echoed in the Road to Zero Coalition hosted by the US Department of Transportation on the same day. The Coalition strives to end fatalities on American roads within the next 30 years and includes USDOT, Federal Highway Administration, Federal Motor Carrier Safety Administration, and the National Safety Council. This goal reflects the urgency to reduce road fatalities in the US, which suffered its largest increase of fatalities last year since 1966 and an even higher toll in the first half of 2016. On a global level, it is a step towards the United Nations Sustainable Development Goal 3.6, to halve the number of deaths and injuries on the roads by 2020.

The Coalition focuses on the safe systems approach, which is the foundation of Vision Zero. Commitment to supporting a safe systems approach and a safe and healthy journey to school is included in a major United Nations document that the US will adopt later this month. Along with other UN member states, the US is expected to sign the UN Habitat III New Urban Agenda, a roadmap for sustainable urbanization. “This document recognizes what we’re celebrating here today – that schools are the heartbeat of a community. A safe systems approach will help us save lives in our schools, our country, and our world,” said Natalie Draisin, US Manager.