A compulsory motorcycle helmet law is estimated to have saved thousands of lives and billions of dollars in Vietnam over the past decade, demonstrating the impact additional road safety legislation and enforcement could have across the South East Asia region, according to a new report published by AIP Foundation and the FIA Foundation. 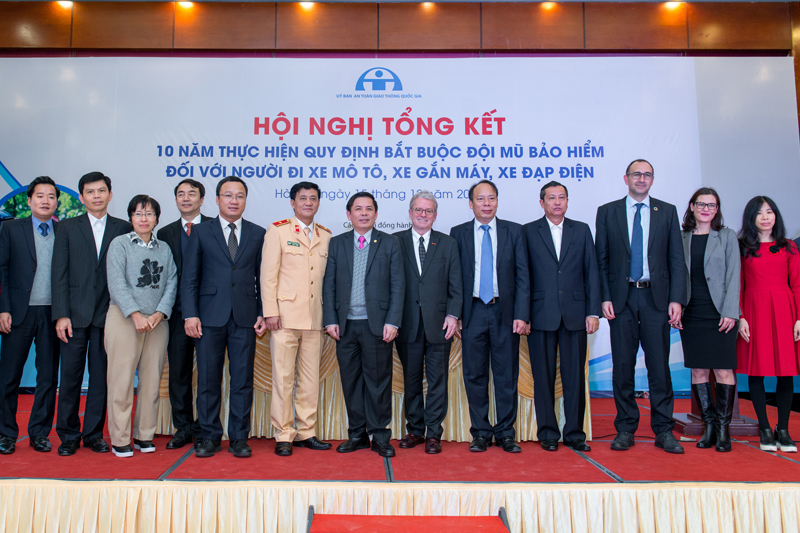 Vietnam’s Minister of Transport (centre with AIP Foundation founder Greig Craft) was keynote speaker at a Review conference to assess progress ten years on from the helmet legislation. 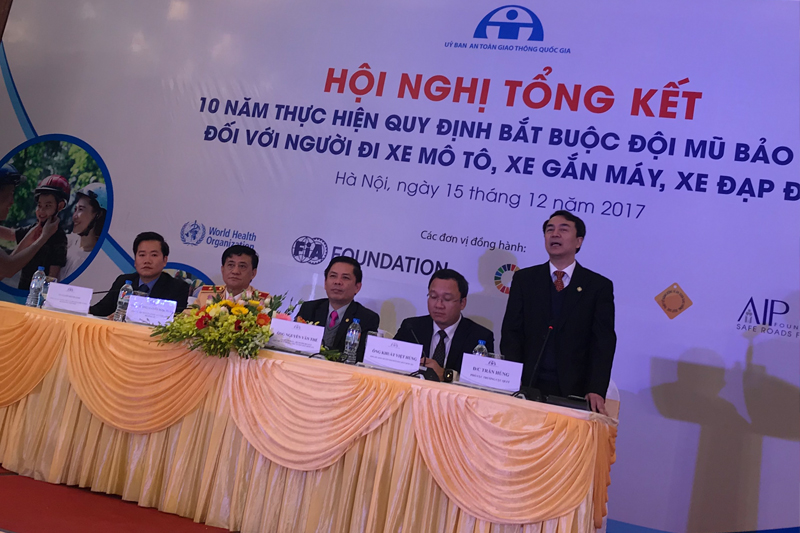 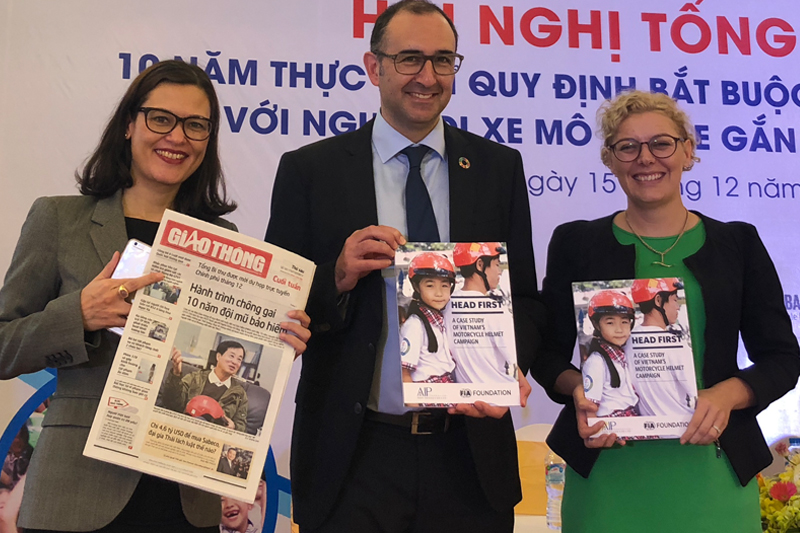 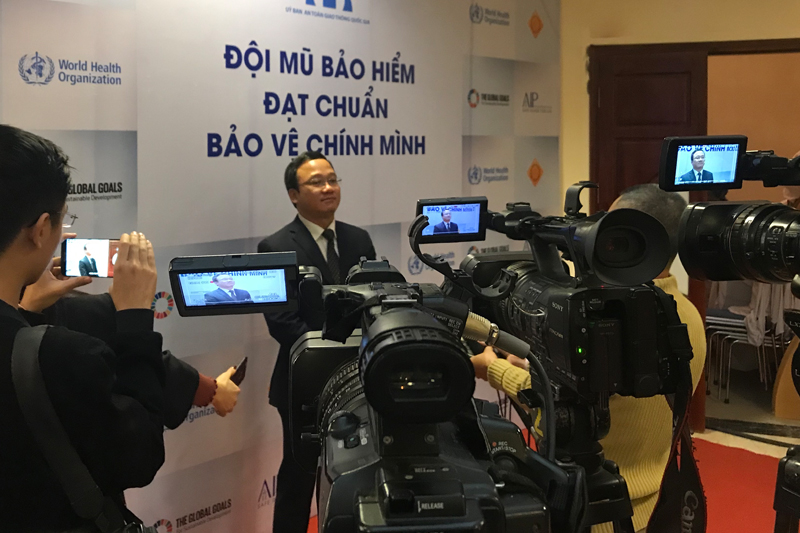 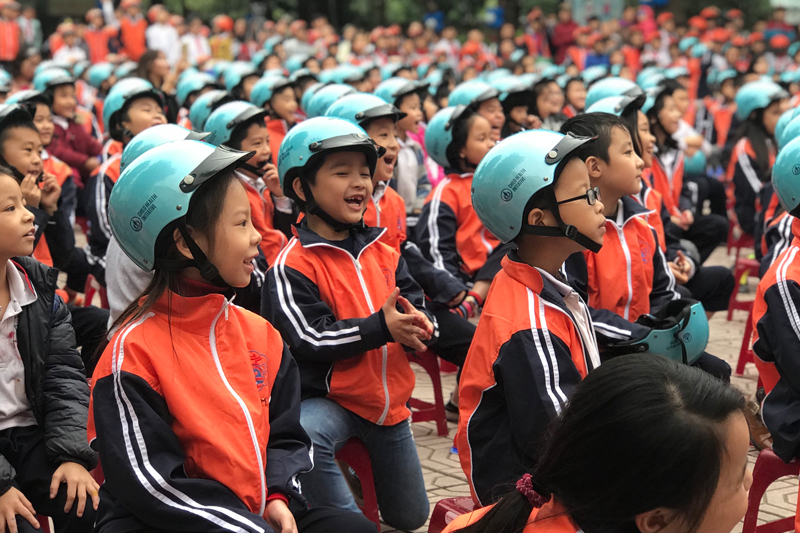 At a Hanoi school, 1000 children received motorcycle crash helmets from the Child Health Initiative to mark the 10th anniversary of the law. AIP Foundation has distributed hundreds of thousands such helmets since 2000. 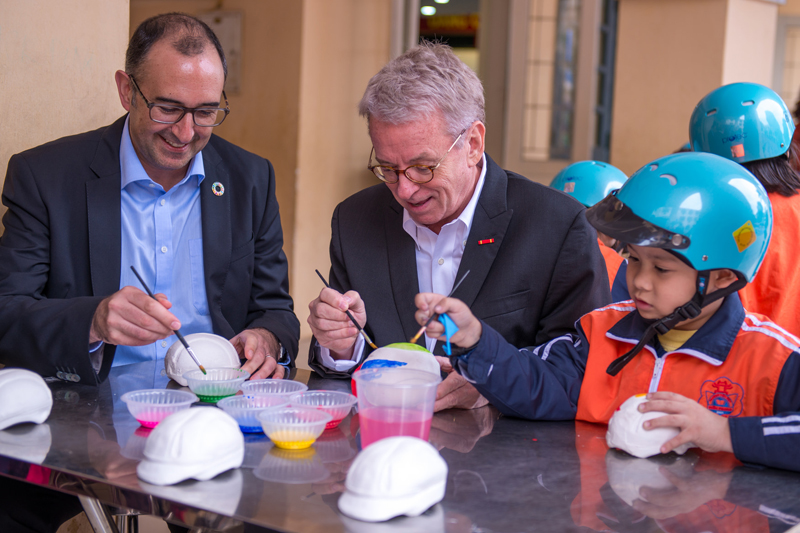 HEAD FIRST: A case study on Vietnam’s motorcycle helmet campaign, researched and written by the team at the AIP Foundation largely responsible for leading the civil society advocacy which preceded the legislation, examines the swift motorisation of Vietnam, the decade-long campaign to secure the legislation, and the immediate and lasting impact – taking helmet use from 6% to almost 90% overnight and preventing an estimated half a million serious head injuries since 2007.

Launched at a Vietnamese Government conference in Hanoi on 15th December 2017, the tenth anniversary of the law coming into effect, the report also examines setbacks experienced by Vietnam in implementing the legislation. These include a continuing failure to tackle sale and use of counterfeit helmets which provide no crash protection; issues with the accuracy of injury data reporting; and a high level of non-compliance of child passengers wearing crash helmets.

But overall the report highlights an unprecedented success story, of a developing country facing up to its road traffic injury crisis and taking sustained, long term action to tackle it. The report follows swiftly on from announcement of new World Health Organization global road safety targets that aim to increase the proportion of motorcycle riders correctly using standard helmets to close to 100% by 2030. This target was designed, along with a number of other ‘sub-targets’, to support the United Nations Sustainable Development Goals target to halve deaths and serious injuries on the world’s roads by 2020.

According to the WHO, road traffic injuries are the tenth leading cause of death globally, responsible for more than 1.3 million deaths each year and as many as 50 million injuries. More than half of these fatalities occur in the Asia Pacific region with 34% of these deaths involving powered two-wheel vehicles. Research has identified that wearing a motorcycle helmet correctly can reduce the risk of death by almost 40% and the risk of severe injury by over 70%.

Despite overwhelming evidence that mandating the use of motorcycle helmets is the most effect way to lead to behavioural change, fewer than fifty countries have comprehensive legislation governing use and standards of motorcycle crash helmets. Without such laws, enforcement agencies are powerless to prevent hundreds of thousands of entirely preventable deaths and serious injuries.

The FIA Foundation/AIP Foundation report is intended to provide a road map for other developing countries experiencing similar rapid motorisation and examining the cultural, economic and human impact of this ground-breaking legislation.

Speaking at a 10th Anniversary Review Conference organised by the Vietnamese Government, Dr. Khuat Viet Hung, Vice Chairman of the National Traffic Safety Committee, commented: “The passage of the helmet law in 2007 has led to financial gains, saving Vietnam an estimated $3.5 billion USD in medical costs, lost output, and pain and suffering. However, the motorcycle crash injury epidemic in Vietnam is by no means solved. We must continue multi-sector collaboration and build from lessons learned in order to achieve success.”

Greig Craft, President of AIP Foundation, said: “Vietnam’s story provides an example of what is possible when a dedicated government, NGOs, and public and private partners collaborate for a common objective. With concerted effort, strong political will, and the support of local and international partners at all levels, we can succeed.”

Following the conference participants and special guests, including the US Embassy’s Deputy Head of Mission, joined more than 1,000 students, teachers, and staff joined conference for extracurricular road safety activities at Tien Phong Primary School, located in a suburb of Hanoi, to commemorate the anniversary of the law. Activities included a helmet handover to the children, supported by the Child Health Initiative; helmet sculpture painting; a helmet wearing contest; and a special performance by the National Vietnam Circus. The event also recognised some of the original partners of the Vietnam Helmet Wearing Coalition (VHWC), which helped to spearhead advocacy efforts for the 2007 law.

“Vietnam provides an important case study in government determination, sustained over the long term, to tackle motorcycle deaths and injuries”, said Saul Billingsley, Executive Director of the FIA Foundation. “The country’s very real success can be measured in tens of thousands of deaths prevented, hundreds of thousands of serious injuries avoided, and billions of dollars saved. The motorcycle helmet, with associated measures to ensure its effective use, is a public health vaccine that will pay for itself many times over. The Vietnam experience demonstrates how and why other countries must act, and with urgency.”