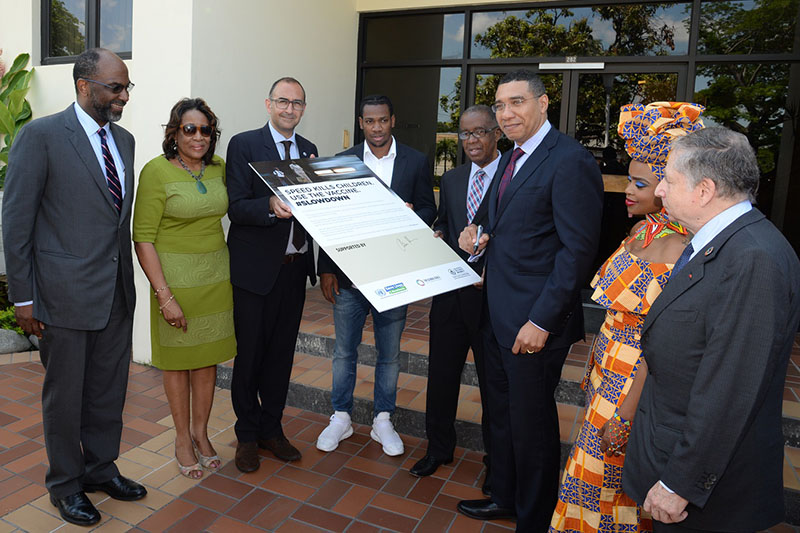 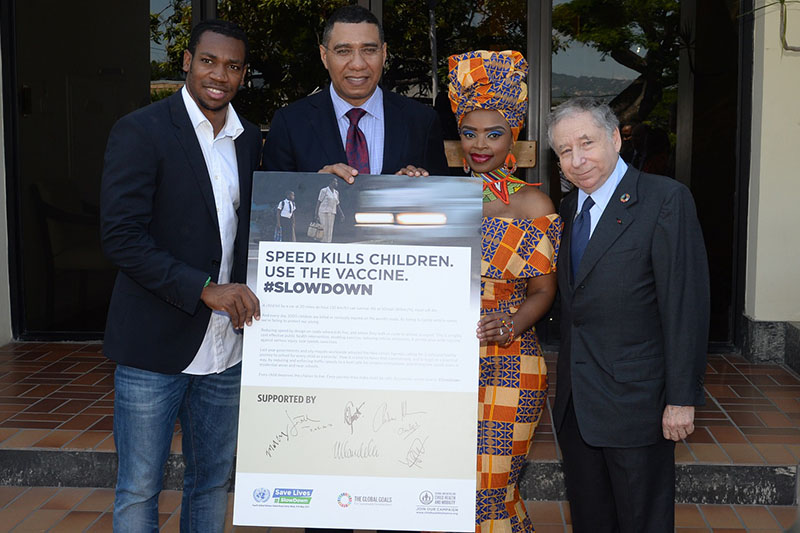 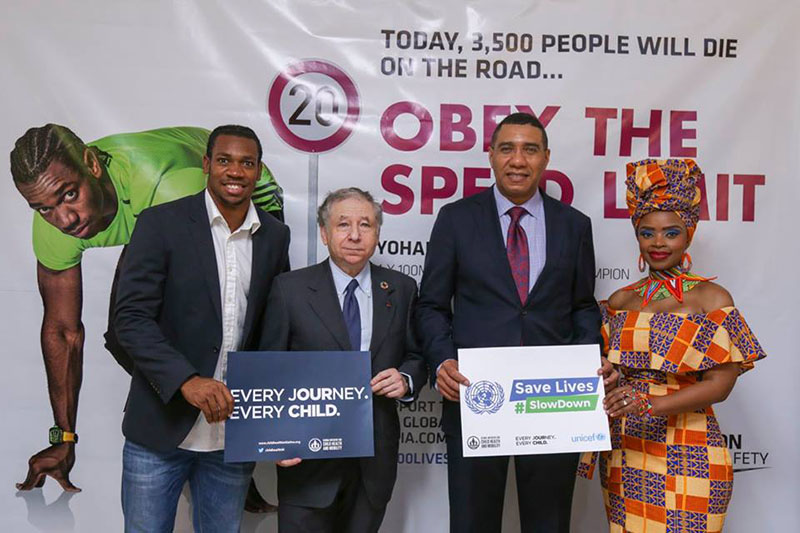 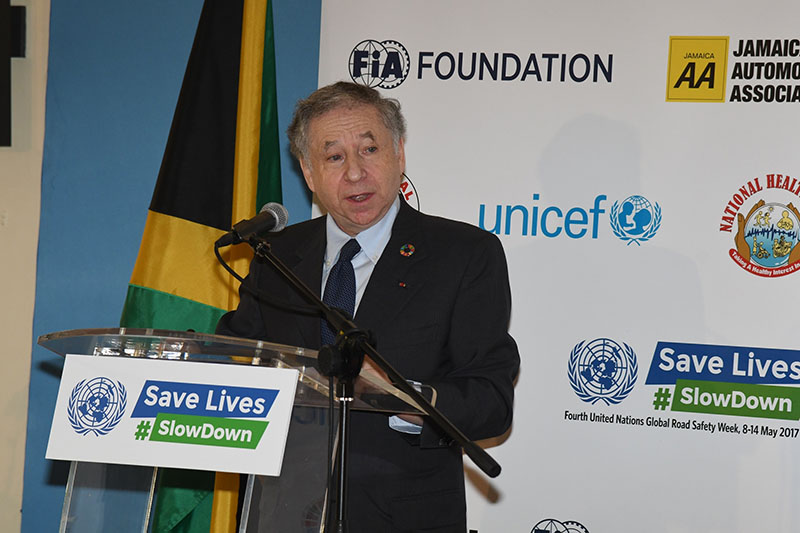 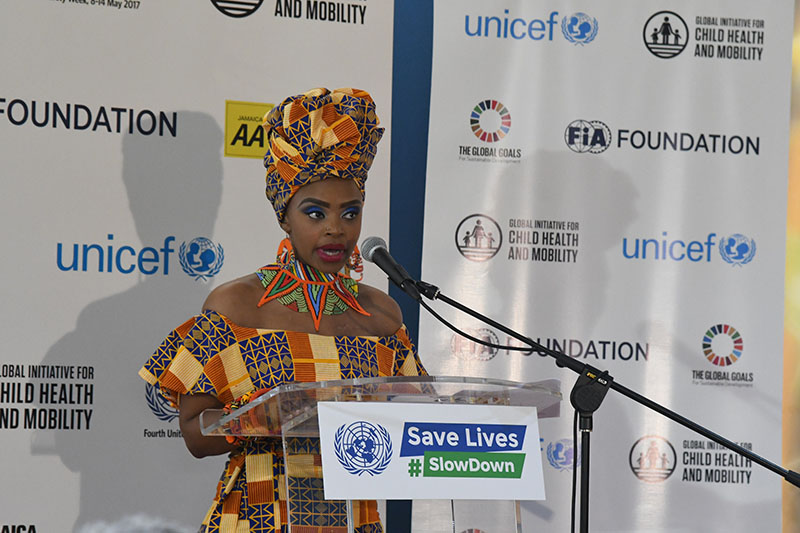 Zoleka Mandela: “Can you imagine having a vaccine for a killer disease and not using it?”

Fastest men in the world say #slowdown. Above: Athlete Yohan Blake spoke at the event: ‘Leave the speed to me”. Below: Athlete Usain Bolt also supported the campaign. 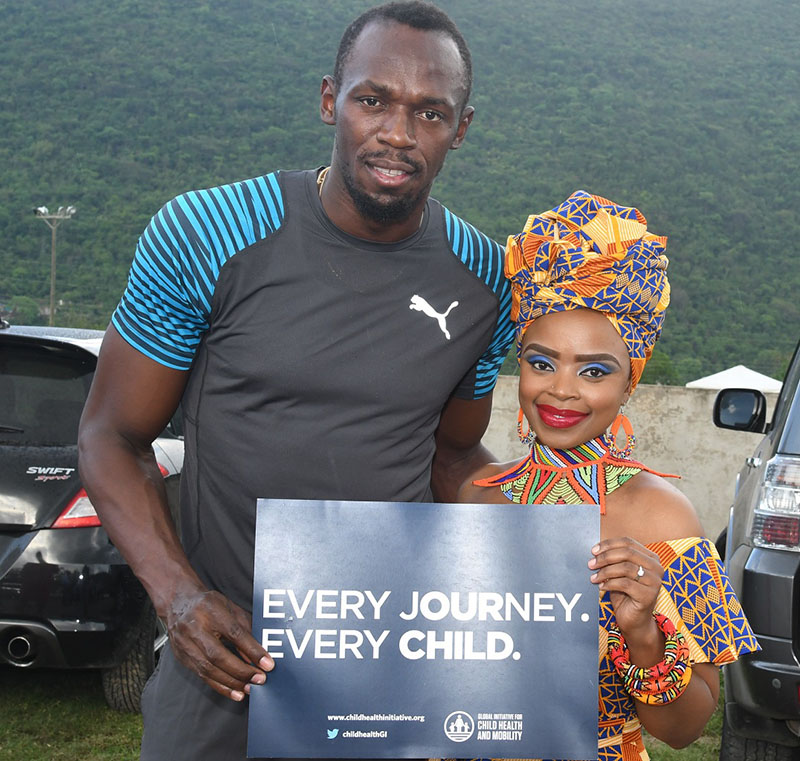 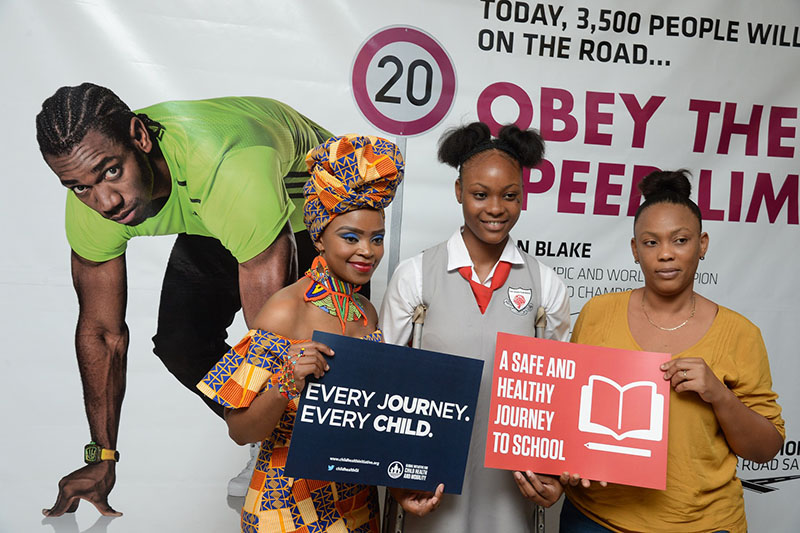 Schoolgirl Nneka Thomas (centre), who was badly injured in a road crash, and her mother Roxanne joined Zoleka Mandela.

In the week that the world highlights the need for traffic speed reduction to save lives, the leader of the country which boasts the fastest athletes on the globe has signed on to action to implement the ‘speed vaccine’.

Prime Minister Holness said: “This morning, ahead of the UN Global Road Safety Week launch, I signed an Open Letter urging action on reducing and enforcing traffic speeds to a level safe for children in Jamaica, as well as prioritising low- speed zones in residential areas and near schools.”

Before an audience at Jamaica House, Kingston, including former Jamaican Prime Minister Bruce Golding, several cabinet ministers, senior police officers, the ambassadors of France and South Africa, the UN Representative to Jamaica, and the head of the Jamaica UNICEF office, Prime Minister Holness committed his government to renewed action. “Road safety is a priority for Jamaica. The government is making the commitment, today, to reduce road crashes by 50 per cent by 2020. The public can look for a new Road Traffic Act that has safety features. These features will ensure that motorcyclists and pedestrians are visible while utilizing the roadways. We want to see a systematic reduction in road traffic crashes and deaths. We are on an exercise to improve our roadways. We are building highways with better road surfaces. I have given a directive to the National Works Agency to build roads with safety features.”

In his remarks, UN Special Envoy Jean Todt said: “Speed management has a vital role to play. If we address speed through better road design and effective enforcement, and if across Latin America and the Caribbean we adopt the available UN standards and regulations to make our vehicles as safe as possible, we can drive down road deaths. Many countries and cities demonstrate the potential of speed management by starting with their most vulnerable citizens – children. Designing low speed zones and safe infrastructure for the journey to school is proven to save lives and prevent injury.”

In a powerful and emotional speech, Zoleka Mandela said: “With effective policing and measures such as road humps and traffic calming we could save hundreds of thousands of lives worldwide each year. We’re facing a man-made epidemic and we have the vaccine – we’re just not using it. Can you imagine having a vaccine for a killer disease and not using it? Imagine leaving children to face illness or death and not acting. Yet this is really what we are doing. In failing to use the low-speed vaccine around our schools, we are failing our children. It is their lives at stake.”

World and Olympic champion athlete Yohan Blake, who is currently starring in the FIA’s #3500LIVES global advertising campaign as the ambassador for speed reduction, told the audience, and thousands more watching on Facebook Live, to ‘leave the speed to me’. He said no journey was so important that people needed to risk their lives or those of others by speeding. Later in the day, fellow Jamaican athlete and renowned sprint champion Usain Bolt also gave his support to the campaign, meeting Zoleka Mandela at his training ground to discuss the need for safe journeys to school.

Attending the event was 15 year old Kingston schoolgirl Nneka Thomas, who lost a leg in a road traffic crash when a speeding driver mounted the pavement as she was walking to school. Her plea on behalf of children: “Let them know it is safe to cross the road, to go anywhere they want to go.” Nneka, a talented netball player, is still pursuing her sporting dreams. Prime Minister Holness highlighted her case during the event, saluting her courage. He said: “As Yohan has said, leave the speed to him. To have an injury like Nneka Thomas suffered is totally avoidable.”

Also speaking at the event were UN Resident Coordinator, Bruno Pouezat; UNICEF Jamaica Representative Mark Connolly, who urged the government to adopt UN road safety conventions and regulations; FIA Foundation Executive Director Saul Billingsley, who called on leaders around the world to make policy for all children as though they were their own, and to implement the speed vaccine without delay; and AA Jamaica President Earl Jarrett. The UN Global Road Safety Week event was moderated by Dr Lucien Jones, of Jamaica’s National Road Safety Council

Read more about the speed vaccine and how to deliver it