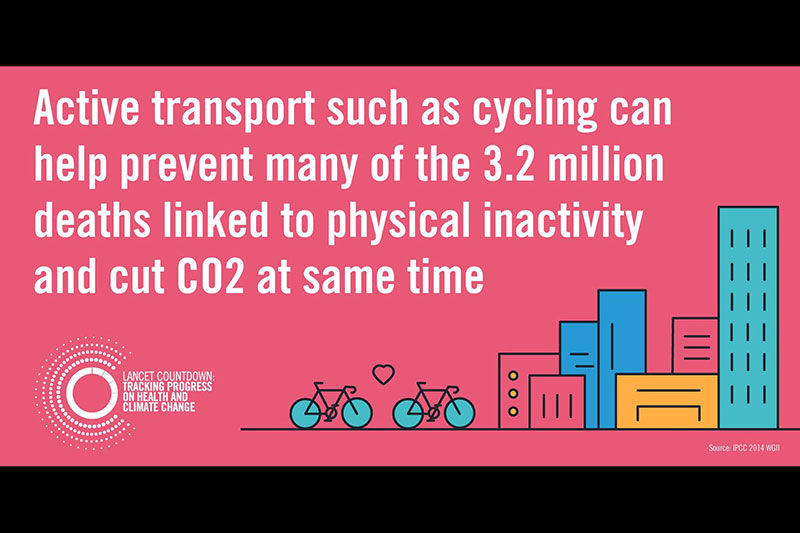 The Lancet report includes a focus on sustainable transport. (Image courtesy of The Lancet.)

The Child Health Initiative has called for immediate action to protect the millions of children affected by dangerously high levels of pollution in cities.

More than 2,100 cities exceed the recommended levels of atmospheric particulate matter - particles emitted when fuels, such as coal or diesel, are burned and are small enough to get into the lungs - according to the latest publication in The Lancet Countdown: Tracking Progress on Health and Climate Change. There has been an 11.2% increase in exposure to fine particulate matter since 1990, aided by a slow transition away from fossil fuels. More than 803,000 deaths across 21 Asian countries in 2015 were attributable to pollution from coal power, transport and the use of fossil fuels at home, the report states.

The Child Health Initiative launched its #everylife campaign, calling for every child to have the right to health and a safe environment, including the right to protection from air pollution. The Declaration of Every Child’s Right to Safe and Healthy Streets which comprises six articles focused on protecting children was launched at the ‘Every Child. Every Journey’ conference in London last month.

Globally 300 million children live with dangerously toxic levels of air pollution, to which road traffic is a significant contributor. Two billion children are living in urban areas which breach WHO air quality guidelines while children attending schools which have higher traffic-related air pollution have also been found to exhibit lower rates of cognitive development than those in less polluted areas.

Breathing the same pollutant concentrations, children have a two to four-fold higher dose reaching their lungs compared to adults. The impact of air pollution on infants is greater because they have a higher metabolic rate than adults, so they breathe a greater volume of air per minute relative to their size. Children also tend to be exposed to greater levels of pollution than adults because they are nearer to ground level and pollution from vehicle exhausts when travelling near roads. Research by King’s College found that children’s exposure to traffic pollution is associated with decreased lung function and lung volumes, while exposure to air pollution during pregnancy is also linked with low birth weight and premature birth, with can subsequently impact on children’s lungs. A US study found that children living in areas with high levels of particulate matter are four times more likely to have reduced lung function in adulthood than those living in less polluted areas.

Saul Billingsley, Executive Director of the FIA Foundation, said: “It is the poorest children and communities who live alongside the busiest and most dangerous roads, breathing the most toxic air and, as a consequence, many will suffer long term health effects including asthma and heart disease. The global community must respond to these latest statistics that show the true scale of the polluted air crisis and it must be a new priority for child rights, equity and social justice.”