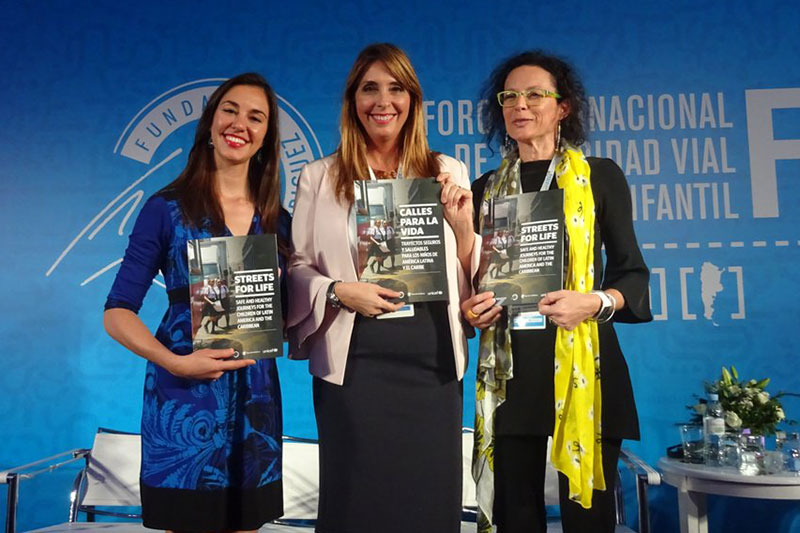 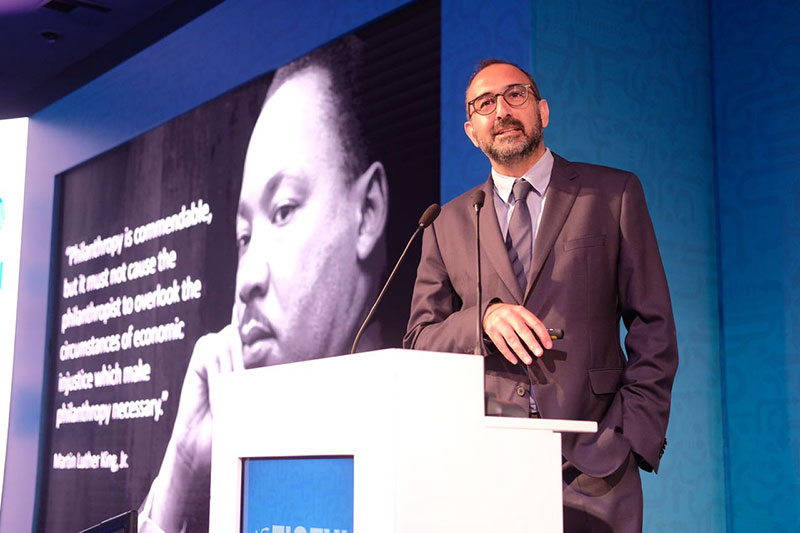 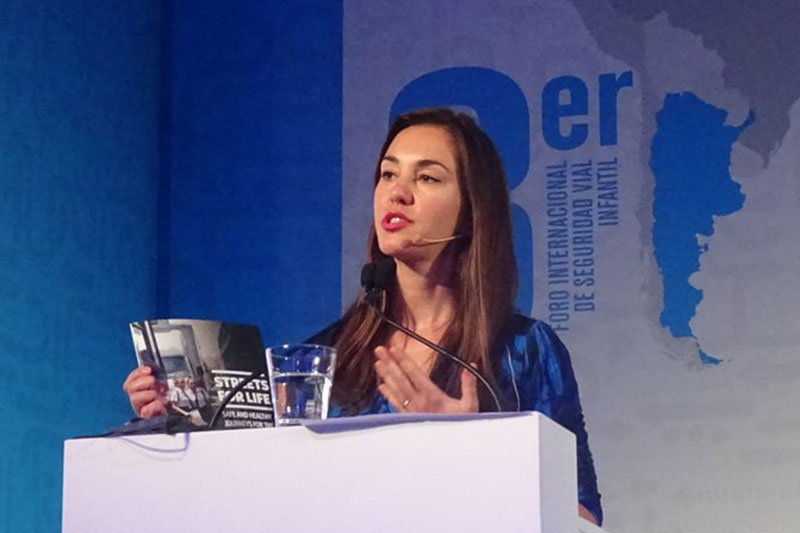 Natalie Draisin calls for action for child rights in Latin America at the report launch. 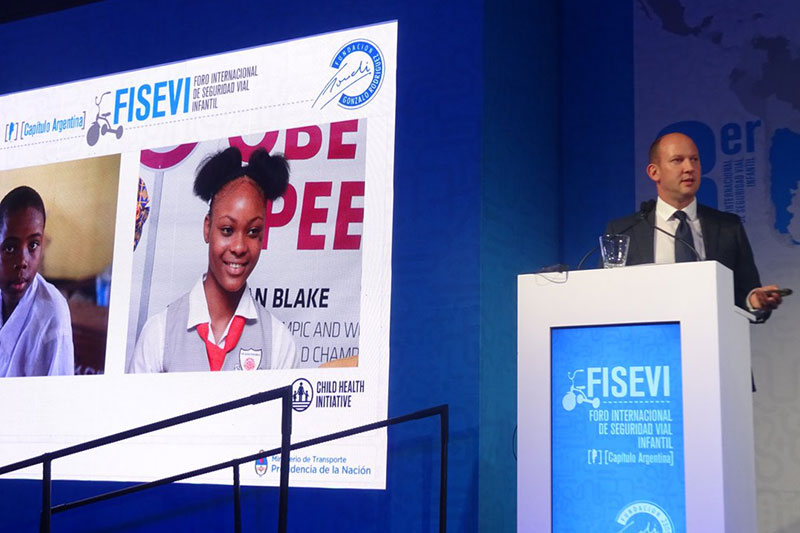 FIA Foundation Deputy Director Avi Silverman opens the session on safe school zones by sharing the personal stories of Celia and Nneka who were hit by vehicles near their school. 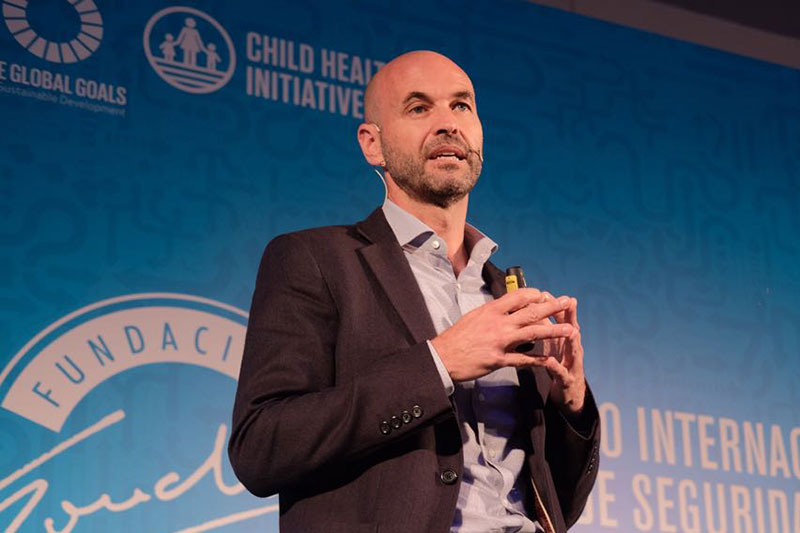 Governments and cities across Latin America and the Caribbean together with international agencies must urgently combat road traffic injury, which is the leading cause death for children ages five to 14 in the region, says a new report launched at the FISEVI conference in Buenos Aires.

The report, Streets for Life: Safe and Healthy Journeys for the Children of Latin America and the Caribbean, published jointly by UNICEF, Save the Children, Fundación Gonzalo Rodriguez and the FIA Foundation, highlights that children in low-income communities are most at risk of suffering from the combined health impacts of road traffic.

FIA Foundation North American Director Natalie Draisin joined Nani Rodriguez, President of Fundación Gonzalo Rodriguez and Dr. Luisa Brumana Regional Health Advisor for UNICEF Latin America to launch the report to an audience of government agencies, road safety activists and NGOs from across the region, to put every child’s right to a safe and healthy journey to school at the heart of the agenda.

High rates of motorisation and inequality across the region combined with a widespread lack of protection on the roads are posing intolerable health burdens upon young people: in addition to the threat of road traffic injury, millions of children across Latin America live in areas that dangerously exceed air pollution limits where vehicle emissions are a significant contributor.

The report highlights that:

The report shows that daily danger faced by young people on the region’s roads is a crisis for child rights, especially when existing life-saving solutions are not being scaled up by governments. Dr. Luisa Brumana highlighted this hypocrisy by stating that as part of the Convention on the Rights of the Child, member states acknowledge every child’s intrinsic right to life. Government agencies from Argentina, Columbia, Chile and more, reported on progress in-country but also shared the need for interagency collaboration to protect children in Latin America.

Argentina’s Minister for Transport Guillo Dietrich, the Ministry co-sponsoring the FISEVI conference, revealed that there is still a long way to go in the country, with 324 children killed in 2017 and 2018 on course to match this figure.

Attendees presented scalable practical solutions to reduce the impact of road traffic on children, offering compelling cases for reimagining cities to prioritise the needs of all people over cars. Focusing on the needs of vulnerable road users such as children, creates healthy cities for all. WRI Brazil showed how street space can be redistributed by the percentage of different users can protect vulnerable pedestrians, and NACTO presented work illustrating how street design can influence driver behaviour and reduce fatalities caused by speeding.

The report calls for action and funding from governments, donors and the leading agencies tasked with addressing child health. Joining the open plenary session, Executive Director Saul Billingsley called on the international community to urgently step up action to address this social justice issue. Inability to do so prevents the delivery of the Sustainable Development Goals and the Every Women, Every Child Agenda, in the region and globally.

María Cristina Perceval, Regional Director, UNICEF Latin America & the Caribbean said: “Road traffic deaths, disabilities, the suffering and hardship they cause children and their families are predictable and preventable. UNICEF calls on governments in the region to plan, implement and support the solutions required to prevent deaths, injuries and disabilities due to road crashes, so to ensure that every child, every day, everywhere has a safe journey to school.”

Saul Billingsley, FIA Foundation Executive Director said: “Our children are facing a public health epidemic resulting from road traffic. Put simply, the solutions work – there are strong examples across the region of life saving policies being implemented. Yet they are too rare and isolated. We need a scaled-up response, a regional action plan complemented by significant donor investment. Globally we are calling for a UN special summit on child and adolescent health to provide the urgency and leadership to save millions of lives between now and 2030. Latin America and the Caribbean must face up to the intolerable health burdens placed on children and as a region must play a major role in this.”

Nani Rodriguez, President Fundación Gonzalo Rodriguez said: “As a citizen of Uruguay and as a mother I am passionate about fighting this monster that takes the lives and threatens the health of millions of Latin American children. We can save lives on our roads but far too often our leaders are not taking action. In my country we have fought hard on issues such as mandatory use of child restraints and safe school transport. We must take this fight to the whole region and we call upon international agencies and the UN to support us.”

Read 'Streets for Life: Safe and Healthy Journeys for the Children of Latin America and the Caribbean'