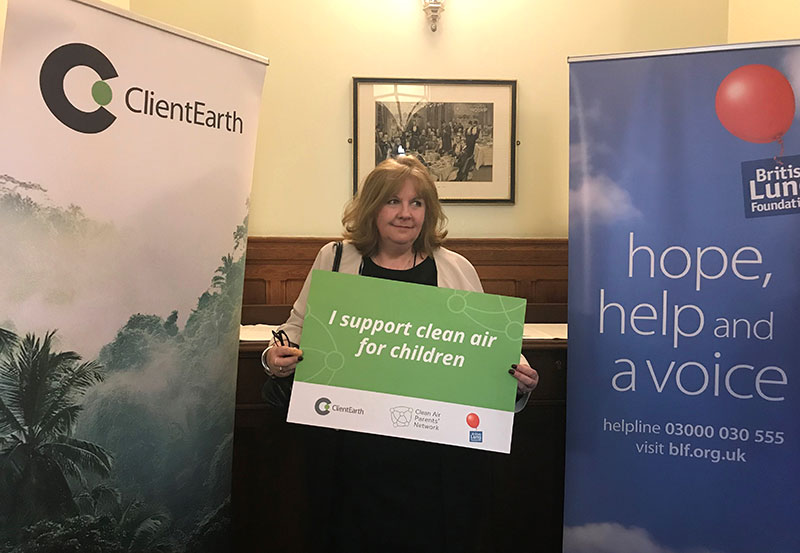 A group of parents has called on the UK government to release funding for emergency measures to clean up illegal levels of air pollution around schools and nurseries across the country.

The National Clean Air for Children Programme was launched at a parliamentary reception with more than 60 MPs including former Labour leader Ed Miliband and ex-Conservative cabinet minister Maria Miller.

The programme, which calls for £153m of funding, was drawn up by the Clean Air Parents’ Network, which is supported by environmental law organisation ClientEarth and the British Lung Foundation.

The FIA Foundation joined the Royal College of Paediatrics and Child Health (RCPCH), UNICEF UK, Greenpeace, Global Action Plan, the National Education Union and Asthma UK among others to support the call for the initial emergency funding and prioritise the health of children across the UK.

Clean Air Parents’ Network member and mother of two Stephanie Romig says her youngest son’s health issues are caused by air pollution. She said: “I’m extremely worried about the impact that air pollution is having on my children. My youngest has had chronic health problems because of the dirty air that he’s forced to breathe.

“We need urgent action from the UK government to clean up our air so that my sons, and thousands of children like them, don’t continue to suffer.”

Alison Cook, Director of Policy for the British Lung Foundation, said: “Air pollution affects all our health, and children are most at risk. Dirty air isn’t just a problem in the capital. Towns and cities across the UK are affected, so we need to see measures implemented in pollution hotspots nation-wide to protect all children.”

The measures called for in the Programme include banning any new schools, nurseries or playgrounds in pollution hotspots, and traffic exclusion zones around existing ones where it would help reduce children’s exposure to air pollution.

Professor Jonathan Grigg of the Royal College of Paediatrics and Child Health, said: “We know that long term exposure to air pollution has a wide range of adverse health effects in childhood, with our youngest children being the most vulnerable.

“There is overwhelming evidence to suggest that exposure to air pollutants during early life can lead to the development of serious respiratory conditions such as asthma, which affects over 1 million UK children. It is clear that action is needed to tackle this hugely concerning issue and ensure all children have the healthiest possible start in life.”

The UK government does not monitor pollution around schools.

Estimates by ClientEarth based on government data suggest that 13 schools, with a capacity of more than 6,000 places, have been built or approved on or near roads with illegal levels of nitrogen dioxide since 2012.

A total of 21 schools were built or approved in the same period on or near roads with levels of fine particulate matter (PM2.5) – which can pass through the lung lining into the bloodstream – over World Health Organisation recommended limits.

Legal limits for Nitrogen Dioxide (NO2) air pollution, which in areas of illegal pollution comes mostly from diesel vehicles, came into force in 2010. There are still illegal levels of NO2 in 37 of 42 ‘zones’ across the country.

The National Clean Air for Children Programme is calling for the UK government to make £153m of funding available to urgently:

The government also needs to bring in new clean air laws to safeguard our right to breathe clean air with limits based on WHO guidelines. We can make the UK a world leader in clean air, developing the solutions that we and other countries need to protect our health.

The Programme is backed by: