One child saved, many more at risk: Cambodia’s epidemic of road traffic injury 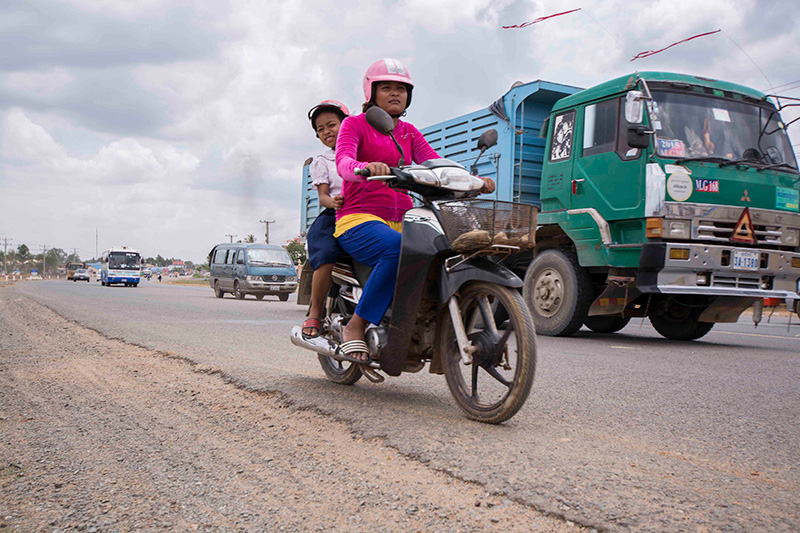 Chantheavin rides with her mother. An AIP Foundation helmet prevented serious injury when she was involved in a motorcycle crash. 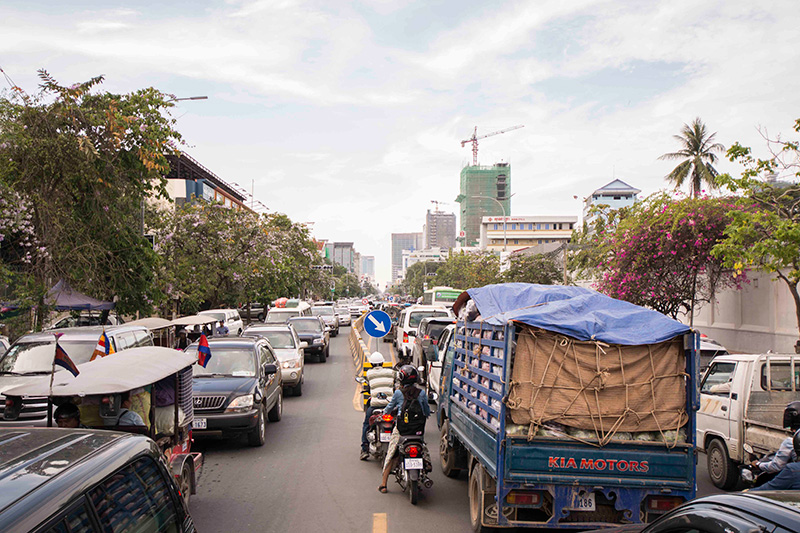 Cambodia is experiencing a rapid increase in motorisation, with 20 people killed or seriously injured every day. 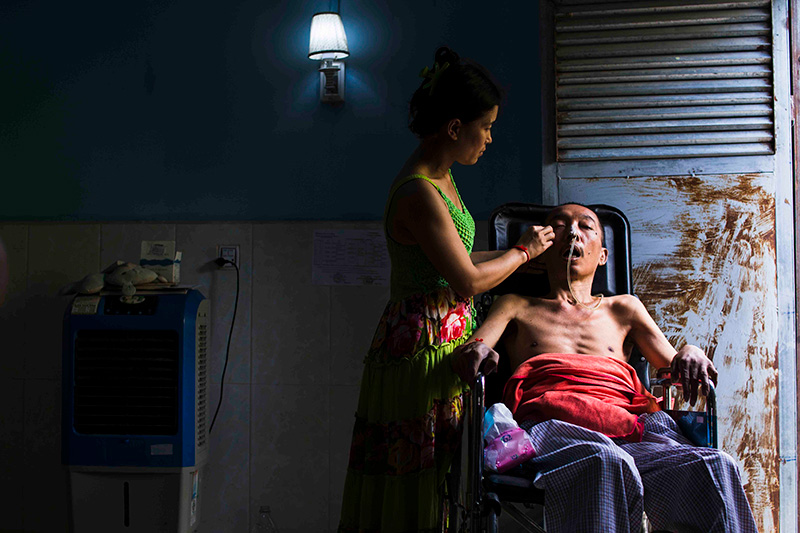 Long term injury from a road crash can destroy the wealth and life-chances of whole families.

An FIA Foundation-supported programme promoting motorcycle helmet use in Cambodia, by supporting tougher legislation, advocating for enhanced law enforcement, and working with schools and communities, is highlighted in the latest edition of the FIA magazine, AUTO.

It felt like any other day. Chantheavin, 8, was traveling on the back of her father’s motorcycle. The dust from the road swirled around her as they made their way down an unkempt highway. Farmers tended to their crops and factory workers headed to one of the many nearby facilities – agriculture and industry contribute to much of the area’s economy. Chantheavin and her family have called this rural region – Kampong Speu Province, Cambodia – home for years.

There had recently been an influx in heavy truck traffic traveling along the same poorly paved road that Chantheavin and her father regularly drove on, making it dangerous to navigate. Chantheavin’s father has been driving a motorcycle for years and is a taxi driver by trade, and he is always cautious when driving along these roads. Navigating bumps and debris was no simple feat. But on that day, Chantheavin’s father did not realize there was a pothole in his path. As his motorcycle tire hit the sudden rut, he lost control of his vehicle and crashed into the side of the road.

“In that moment I didn’t care about anything except that my daughter was going to be okay,” her father said.

“The crash happened so fast. Before I could realize what was going on, I had flown from my dad’s motorcycle and everything hurt,” Chantheavin said. She injured her legs, knees, and back. Thanks to her helmet, though, she suffered no head injuries and survived the potentially fatal incident.

In Cambodia, this story is not unique – a motorcycle is often the family vehicle. Motorized 2- and 3-wheelers account for more than 80% of all vehicles in the country. Whether they’re commuting to school or work, or visiting family in the countryside, people of all ages hop on 2-wheelers daily, making them some of the world’s most at-risk road users. Each day in Cambodia, six lives are lost and 15 more people are seriously injured in crashes. Contrary to the popular idea that infectious diseases and UXOs pose the greatest threats to Cambodians, there are 30 times more road crash-related deaths in Cambodia than those caused by malaria, dengue fever, and landmines – combined.

Helmets are just one of the many tools that can save lives. During a road crash, wearing one reduces the risk of death by 42% and serious injury by 69%. Despite the widespread use of motorcycles, helmet-wearing rates for both adults and children have historically remained low in Cambodia. And, law enforcement efforts have been inadequate – until 2015, there was no law requiring motorcycle passengers to wear helmets. In recent years, international and domestic players have teamed up to fight this deadly reality.

Collaborating to save lives

Chantheavin received the motorcycle helmet that protected her during her crash as part of AIP Foundation’s Head Safe. Helmet On. program, which was supported by USAID-Development Innovation Ventures, FIA Foundation, and other partners. The Cambodian government was also involved in the initiative. AIP Foundation is a road safety nonprofit with 17 years of experience in the industry.

Head Safe. Helmet On. aimed to increase passenger helmet use in Cambodia through three components: school-based programs, mass media communications, and an advocacy campaign. From 2014 to 2016, the program served more than 14 million people nationwide.

“Our aim has always been to empower people with the tools and knowledge necessary to make Cambodia’s roads safe,” Pagna Kim, Cambodia Country Director of AIP Foundation, said. “As an NGO, we’re not responsible for enforcement and we cannot be everywhere at once. We trust that over time, communities can take ownership and affect change.”

The program launched in June 2014. Long-term advocacy efforts led by AIP Foundation came to fruition in January 2015 with the passage of a mandatory passenger helmet law. Enforcement of the legislation, which required for the first time that passengers wear helmets, commenced in January 2016. From 2014 to 2016, adult passenger helmet wearing rates in the program’s three target provinces increased from 11% to 36%. It’s estimated that throughout Head Safe. Helmet On.’s implementation, 349 crash-related casualties were prevented and more than $3 million USD in losses were avoided in these regions thanks to increases in both adult driver and passenger helmet usage.

AIP Foundation and FIA Foundation have been working together to increase helmet use in Cambodia since 2009. Head Safe. Helmet On. built upon this experience and pushed the boundaries of previous road safety work. The program’s school-based activities educated students and teachers from 18 schools about road safety while providing them with quality helmets. At least 332 of these students have been protected from potential head injuries.

The campaign also harnessed the power of the media to raise awareness about the new law. Billboards and television PSAs featuring culturally relevant characters were shown nationwide. Nearly 300 outdoor ads were installed around the country, and the message was broadcast on radio and television hundreds of times. The PSAs were viewed more than 4 million times online.

Though education and mass media activities reached millions, AIP Foundation knew it needed to build a strong road safety culture among public-sector players. The program engaged 2,660 government stakeholders and worked with traffic police to enhance enforcement efforts. At the local level, it established community working groups that empowered everyday leaders to develop their own initiatives.

Communities have already picked up the baton. Instead of issuing fines to offenders, police officers in Kandal Province recently started selling helmets to them. In the initiative’s first day, 70 helmets were sold and the government may expand this tactic to other regions.

Carrying the financial burden of crashes

The economic effects of road crashes can be devastating. Road crashes cost some countries 3-6% of their annual GDPs, and they disproportionately occur in developing countries. In 2013, the government estimated that crashes caused Cambodia to lose more than $330 million USD.

Ros Sonat, a 34-year-old mother of three from Phnom Penh, was involved in a crash while driving her children to school this February. She was crossing a major thoroughfare in the city when another motorcycle crashed into hers. Though her children were safe and her head was protected with a helmet, she suffered other injuries that cost her around $400 USD in medical bills – that’s nearly equivalent to a family’s average monthly income in an urban area of Cambodia.

Sonat’s family has felt the weight of road crashes more than many. Her husband, who worked for years at the Royal Academy of Cambodia, was seriously injured in a car crash while on a business trip in 2014. He is permanently disabled from the incident. Now, he is no longer capable of working and his medical needs place significant burdens on his family. Head Safe. Helmet On. has empowered communities in Cambodia to be safe road users, yet Sonat and her family’s story highlights the abundance of work left to be done.

Young people like Chantheavin and Sonat’s children are involved in road crashes all too frequently in Cambodia. Worldwide, road crashes are the second leading cause of death for 5-14 year olds. In Cambodia, 99% of children killed on the roads are not wearing helmets. Though it’s mandatory for children ages 3 and older, there is no decree that requires fining a child for not wearing a helmet. With no penalty, it’s virtually impossible to enforce the law.

Chantheavin’s father is one parent whose personal experience has made him a child helmet advocate. Both he and his daughter have spoken extensively to their community about how something too often overlooked – a helmet – saved Chantheavin’s life. AIP Foundation and its partners are devising future plans to improve child helmet compliance using lessons learned from its work in Cambodia, as well as similar initiatives in Thailand and Vietnam.

“We have been working on road safety initiatives in Asia and Africa for 17 years, which allows us to apply our best practices across a range of cultures,” Mirjam Sidik, CEO of AIP Foundation, said. “Head Safe. Helmet On. stands as one of our most memorable programs because it’s a testament to the power of cross-sector cooperation and community empowerment. We’re proud of our achievements, yet know our work has only just begun.”