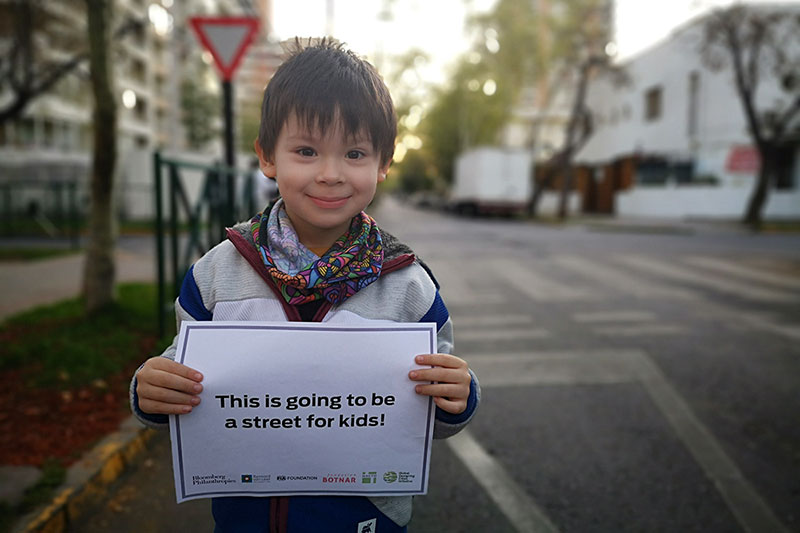 In Santiago, Chile this street will be transformed for children. Fortaleza in Brazil will be one of the pilot cities.

The cities were selected for in-depth technical training and assistance, along with supplemental funding to develop child-friendly streets as part of GDCI’s Streets for Kids programme, supported by Bernard van Leer Foundation, FIA Foundation, Fondation Botnar, and Bloomberg Philanthropies. The programme aims to advance street design for the creation of safe public spaces for kids of all ages and abilities to be able to learn and play, with the freedom to move about cities safely.

Designing Streets for Kids, a new design guidance by GDCI, also funded by the FIA Foundation, will guide training to: identify sites for a street transformation project; engage kids in the design process; and develop a design for a temporary intervention that transforms a street or intersection into a safer, more playful space that invites use by children, caregivers, and others.

“Every child has a right to healthy, safe streets and clean air to breathe,” said Saul Billingsley, Executive Director of the FIA Foundation. “Child-friendly urban design is a cost-effective choice for cities that are truly invested in better environments for our children. That is why we are delighted to support in-depth training and resources around the world to demonstrate the universal potential and impact of the Global Designing Cities Initiative’s Designing Streets for Kids guidance.”

“Safe streets are essential so that everyone in cities can have access to the same opportunities and the same quality of life, said Erion Veliaj, Mayor of Tirana. “This partnership will help give our youngest residents and their caregivers the option to get around as safely and easily on foot, bus or bike as anyone in a car.”

“The future of Fortaleza needs and is being built as a legacy for our children,” said Roberto Claudio, May of Fortaleza. “Urban design is the most important thing we can do to make streets safer for everyone. To move this work forward, we can start today with Streets for Kids and building streets from a child's perspective.”

“This exciting partnership will help transform Kigali’s people-first Open Streets interventions into projects on the street—and designed through the eyes of kids,” said Fred Mugisha, Director of the City of Kigali’s Urban Planning and Construction One Stop Centre. “This programme is an important step in making Kigali a kid-first city.”

“Streets designed for the safety of children aren’t just safer, they are the foundation of a city with less driving, less traffic, less pollution, and a greater lifetime of healthy activity for everyone in Santiago,” said Gonzalo Duran Baronti, Mayor of Independencia, Santiago de Chile.

“Road traffic crashes kill 1.35 million people every year and are the leading cause of death for young people ages 5-29. We can prevent many of these deaths through holistic approaches, including better street design to accommodate pedestrians and bicyclists,” said Kelly Larson, Director of Road Safety and Drowning Prevention Programmes at Bloomberg Philanthropies. “The Global Street Design Guide helped change the way we think about our streets and now Streets for Kids will help refine and focus these proven life-saving strategies for our most vulnerable road users.”

“To understand what makes a street safe means we need to listen to and consider what children need in order to live, cross, and play on them,” said Susanna Hausmann-Muela, Chief Programme Officer of Fondation Botnar. “Streets for Kids is unique not just in its focus on children but because it will incorporate them into the design process, yielding streets safe enough to support them.”