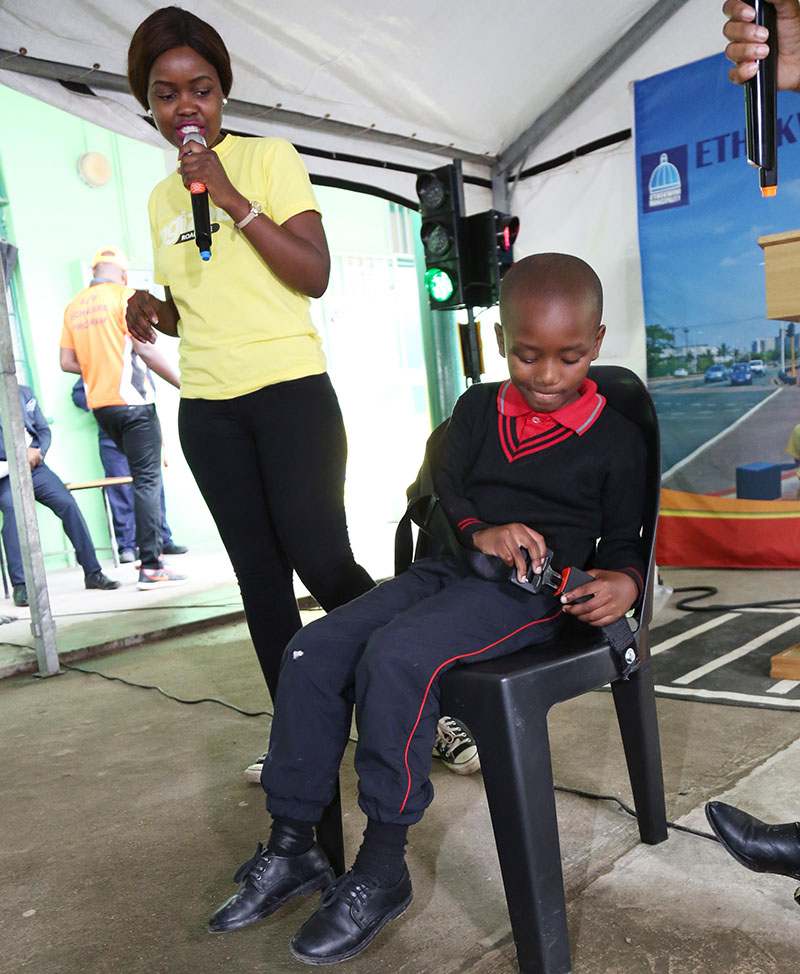 Each school in eThekwini municipality has a demonstration seatbelt, so that children can learn to use it. The positive behaviour trickles down to taxi drivers, often used for student transport to and from school. 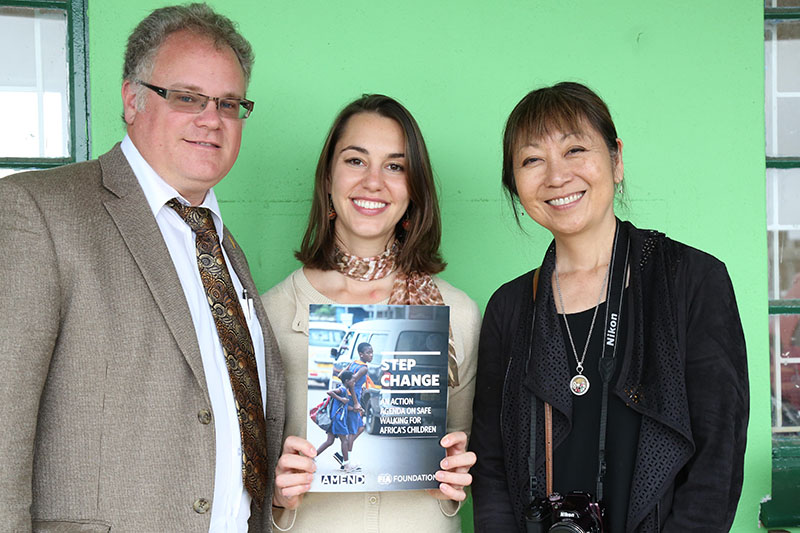 FIA Foundation US Manager Natalie Draisin with Sandra Lee and Gabriel Kardos of J&J. J&J has been committed to protecting children around the world as part of the Decade of Action. In Vietnam alone, they have donated 45,000 motorcycle helmets. 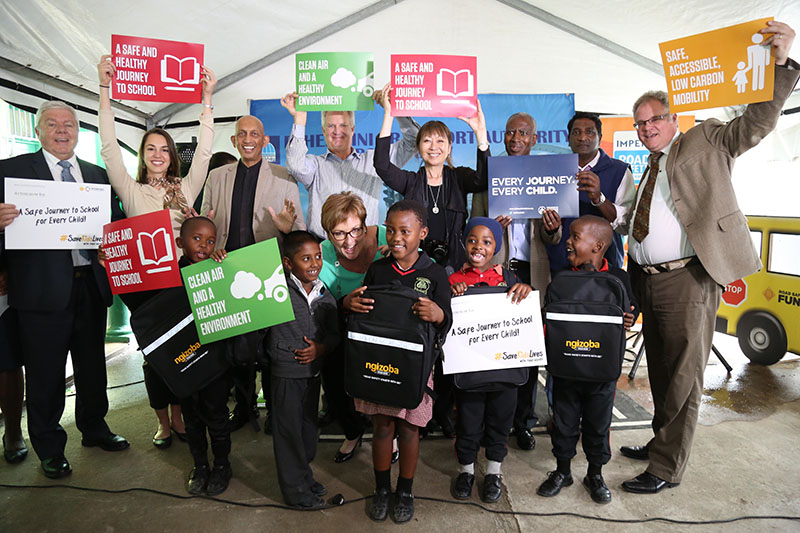 Partners celebrated the launch with students, who received backpacks with reflective strips to increase visibility on the roads. 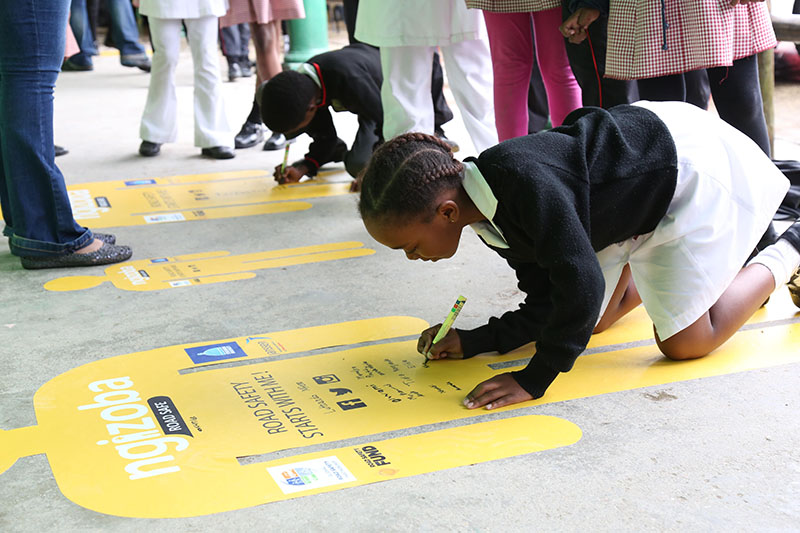 Students took the Ngizoba pledge, meaning ‘I will’ be a safe road user. 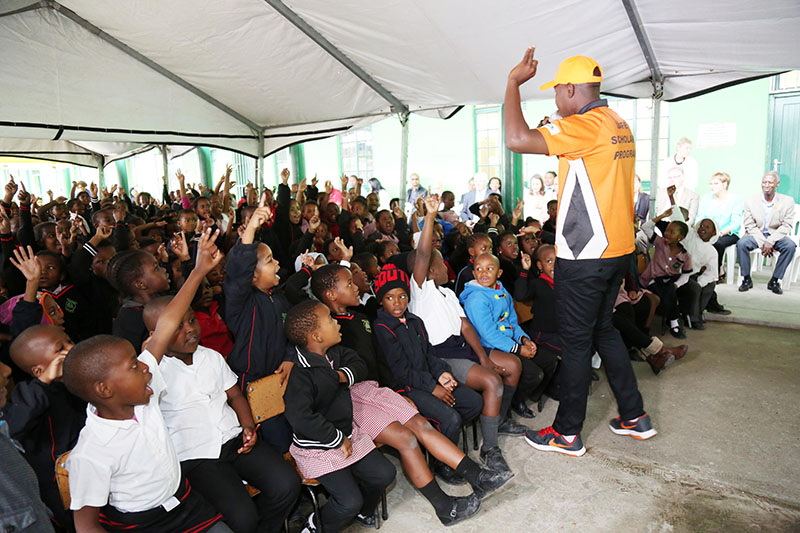 Learning about road safety can be fun. In eThekwini, a drama group presents interactive lessons to students.

Safe routes to school for thousands of low-income children are being implemented in eThekwini Municipality, Durban, with support from Janssen Pharmaceuticals.

In the latest phase of a South African research project, supported through the Road Safety Fund as part of the Global Initiative for Child Health & Mobility, routes to 8 schools in the area are being assessed by the International Road Assessment Programme as part of a holistic intervention, coordinated by the Global Road Safety Partnership.

November 10 2016 marked the launch of the Ngizoba Safe Routes to School project at Shallcross Primary School in Durban, South Africa. At the launch, students aged 6-9 took a pledge to be a safe road user. The pledge, called Nigzoba, or ‘I will,’ was taken after students participated in a dynamic road safety training. They sang and danced their way through crucial lessons about how to be safe on roads and in vehicles. The event concluded with a donation of new backpacks with reflective strips for all 1,200 students, an important contribution in the low-income community of 70,000 semi-rural individuals.

Disproportionately high injuries and fatalities on roads are a reality for such low-income communities. For this reason, Janssen Pharmaceutical Companies of Johnson & Johnson is generously funding the Shallcross Primary School in the eThekwini Municipality of Durban as one of eight Safe Routes to School projects in the area. The project is conducted via the Road Safety Fund, hosted at the FIA Foundation and managed in partnership with the World Health Organization to support UN Sustainable Development Goals 3.6 and 11.2, and the Decade of Action for Road Safety. These projects are a step towards the vision of the Global Initiative for Child Health and Mobility – that every child will have a safe and healthy route to school by 2030.

The eThekwini municipality was chosen because it has a crash database, making it possible to monitor and evaluate the intervention. From 2011 to 2015, there were 16 crashes involving child pedestrians within a 500m of the school along the same road. Six children sustained serious injuries. “We chose schools in areas most affected by crashes, where we had buy-in from the principals. That’s where we knew we could make the greatest difference,” said Sandra Graham, road safety coordinator at eThekwini Municipality.

These interventions are often the difference between life and death in such areas. One woman shared the story of her nephew who was hit by a speeding bus while holding his mother’s hand. “He was in the hospital for days suffering liver damage, a broken arm, cuts, and bruises. We weren’t sure if he was going to live. The driver blamed my nephew, and he’s never faced consequences – we still see him speeding every day,” she said.

To better understand the risks faced by children, the project began with an assessment to analyze infrastructure around the school, conducted by the International Road Assessment Programme. To build capacity, iRAP trained the eThekwini Municipality to repeat the assessment in other schools. Recommended countermeasures included sidewalks, zebra crossings, traffic calming, and increased enforcement. Educational interventions were also recommended, such as child, parent, teacher, community, and driver training and awareness-raising.

With the help of several stakeholders, these recommendations are being implemented. Partners include the Global Road Safety Partnership in South Africa, eThekwini Transport Authority and Metro Police, KwaZulu Natal Department of Transport, South African National Road Agency (SANRAL), and Takalini Sesame. This project follows three others in Cape Town, where Janssen funded road safety interventions in school zones which have resulted in significant reductions in ‘conflict incidents’ between children and vehicles. These countermeasures are promoted in ‘Step Change: An action agenda on safe walking for Africa’s children’, a joint report by FIA Foundation and Amend for the Child Health Initiative which focuses on keeping Africa's child pedestrians safe on the roads.

“We are extremely grateful for the generous contribution of Janssen Pharmaceutical Companies of Johnson & Johnson, and the stakeholders who made this project possible. This intervention will help students achieve the education they need to realise the future they deserve,” said Natalie Draisin, US Manager of the FIA Foundation. “The research being undertaken here in Durban and in Cape Town is demonstrating the benefits of a focus on improving infrastructure safety – reducing speed limits, providing safe and protected crossing points and ensuring sidewalks are available and unobstructed. It is also highlighting the vital importance of safe school transportation.” 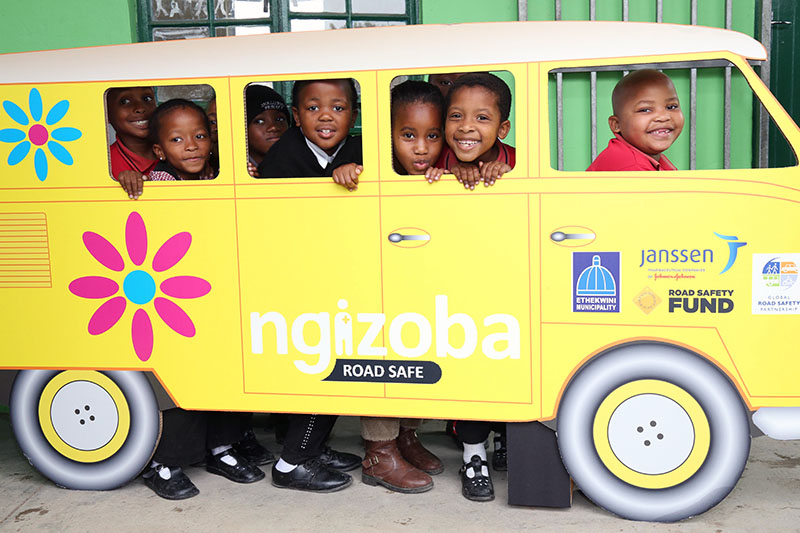