Save the Children progress in Bangkok schools road safety initiative 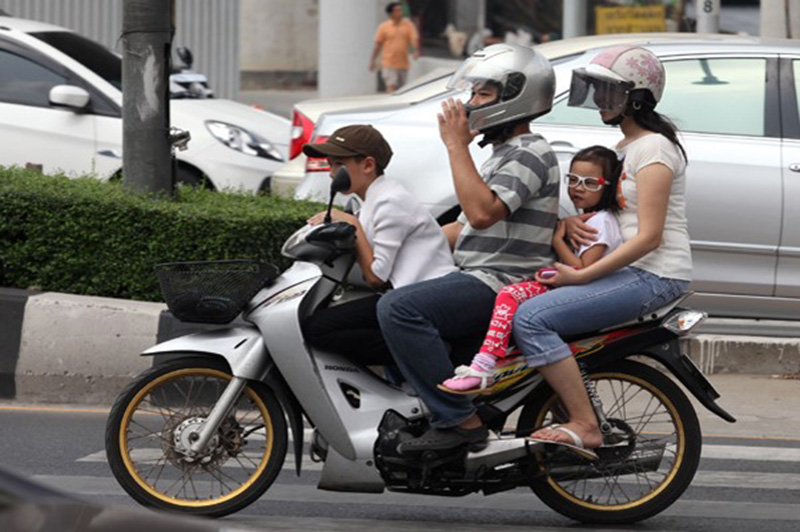 Only 7% of Thai children wear a motorbike crash helmet, contributing to an annual death toll of more than 2,500 children in the country. 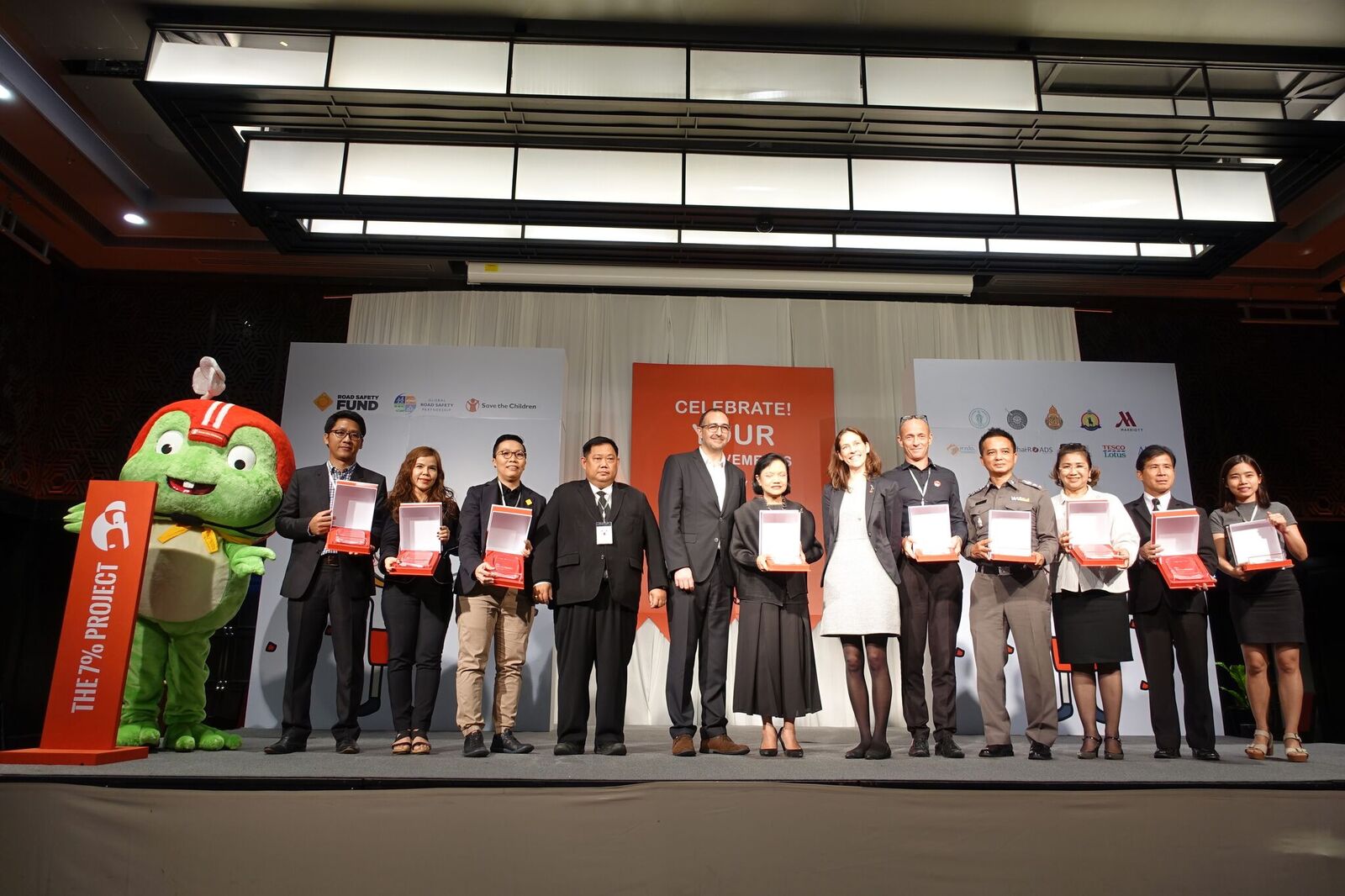 The event recognised a wide range of organisations that are contributing to the campaign. 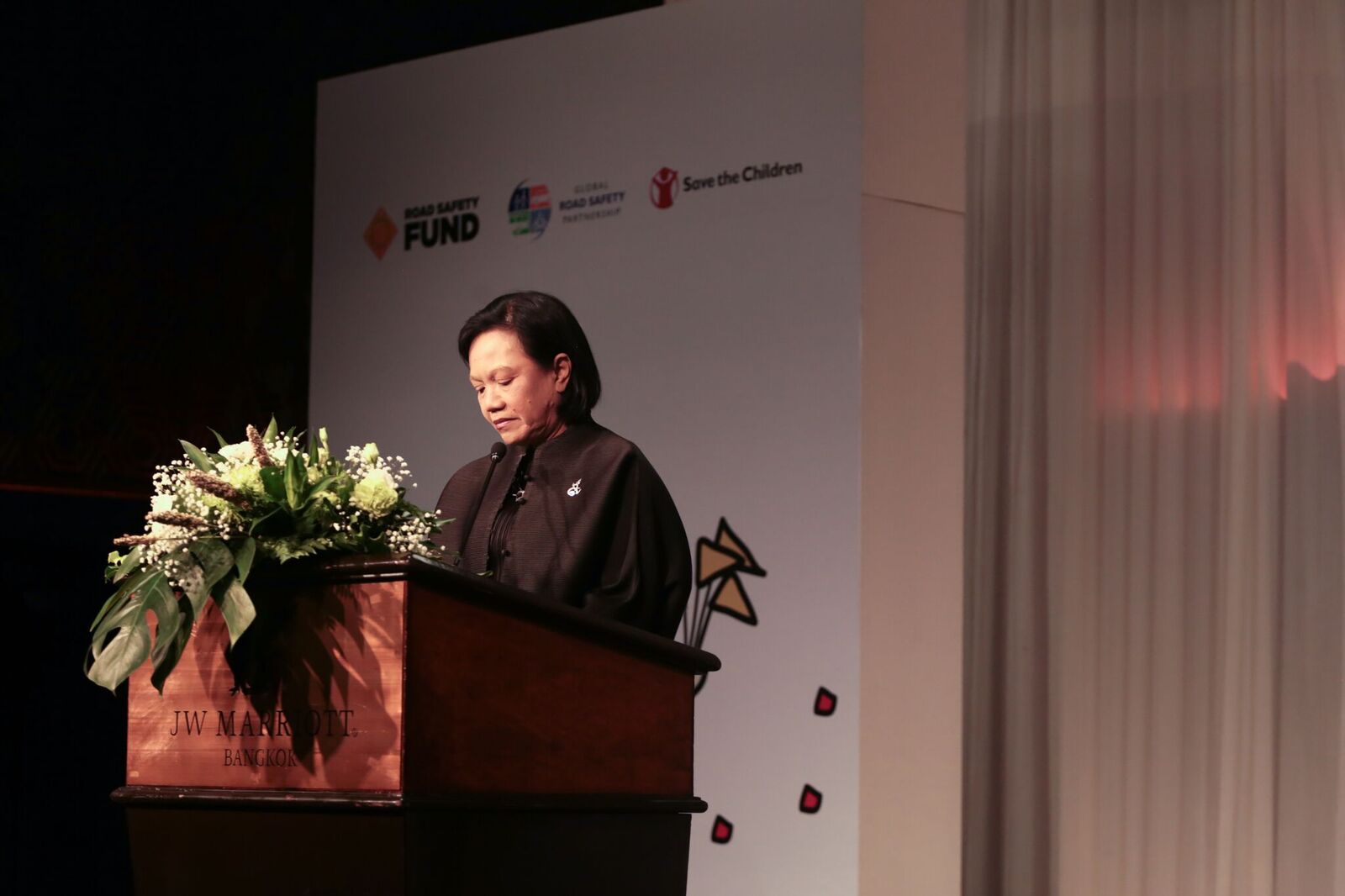 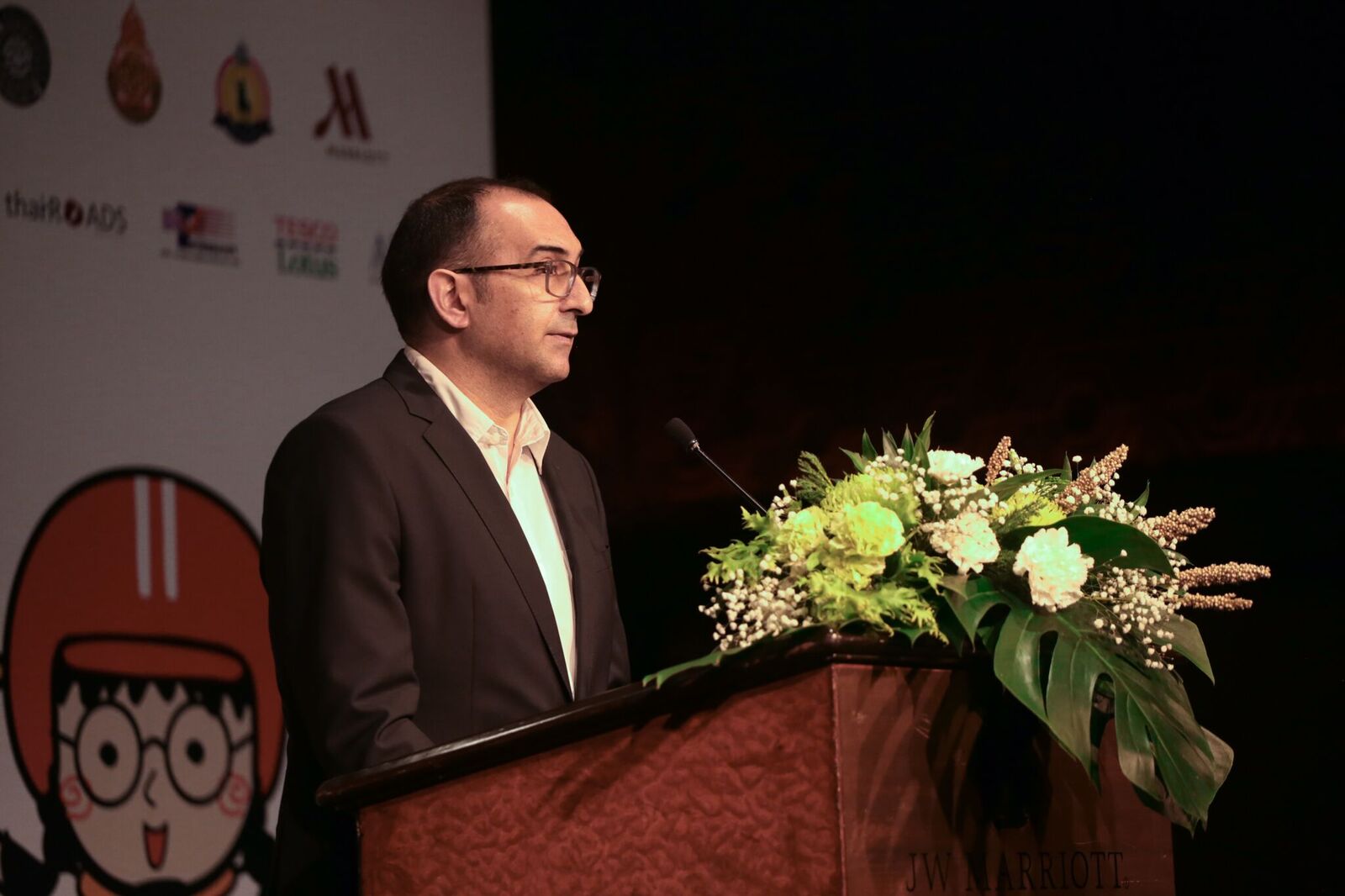 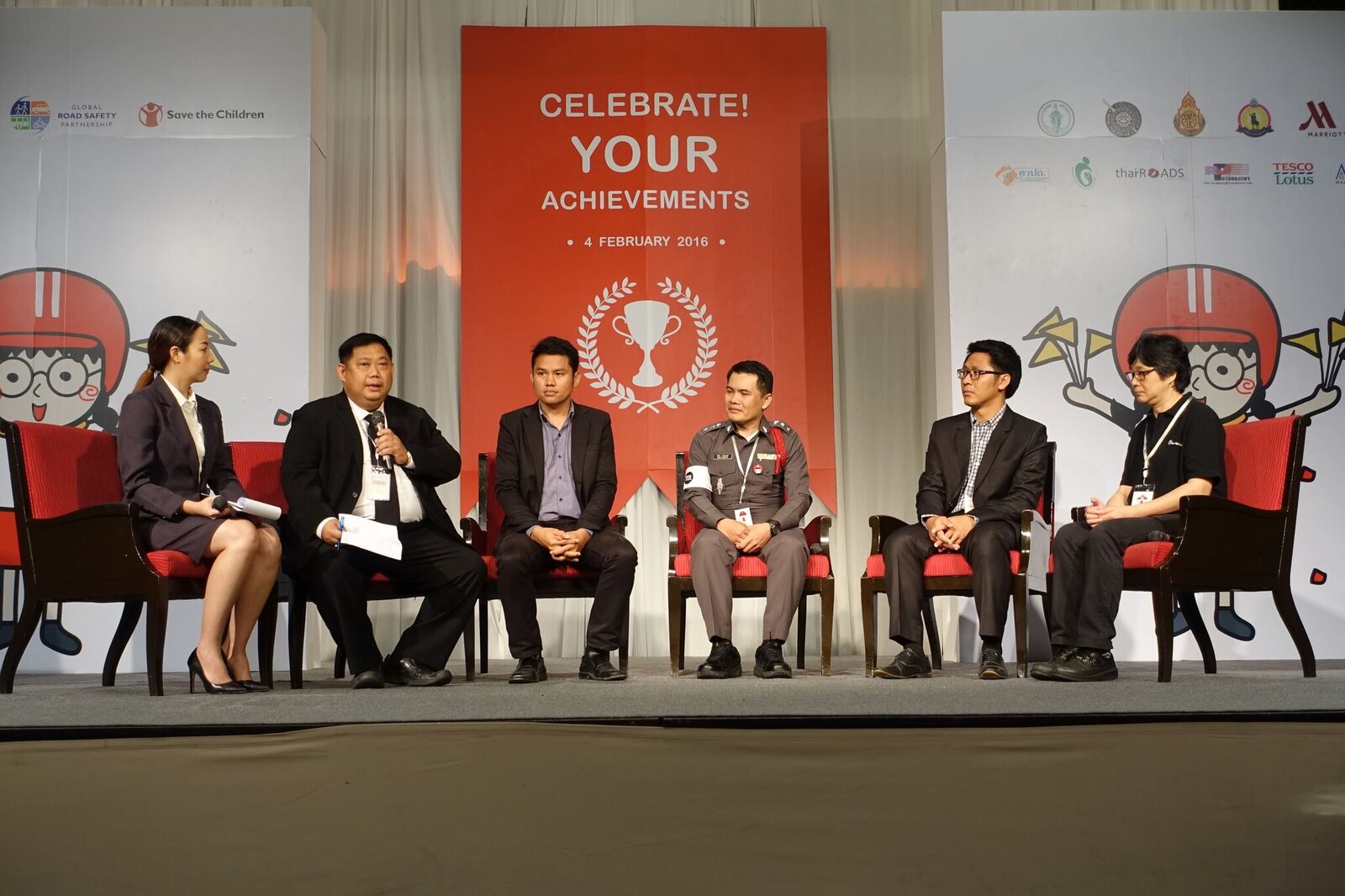 A discussion session on community outreach involving representatives of the government, the police, educators and Save the Children. 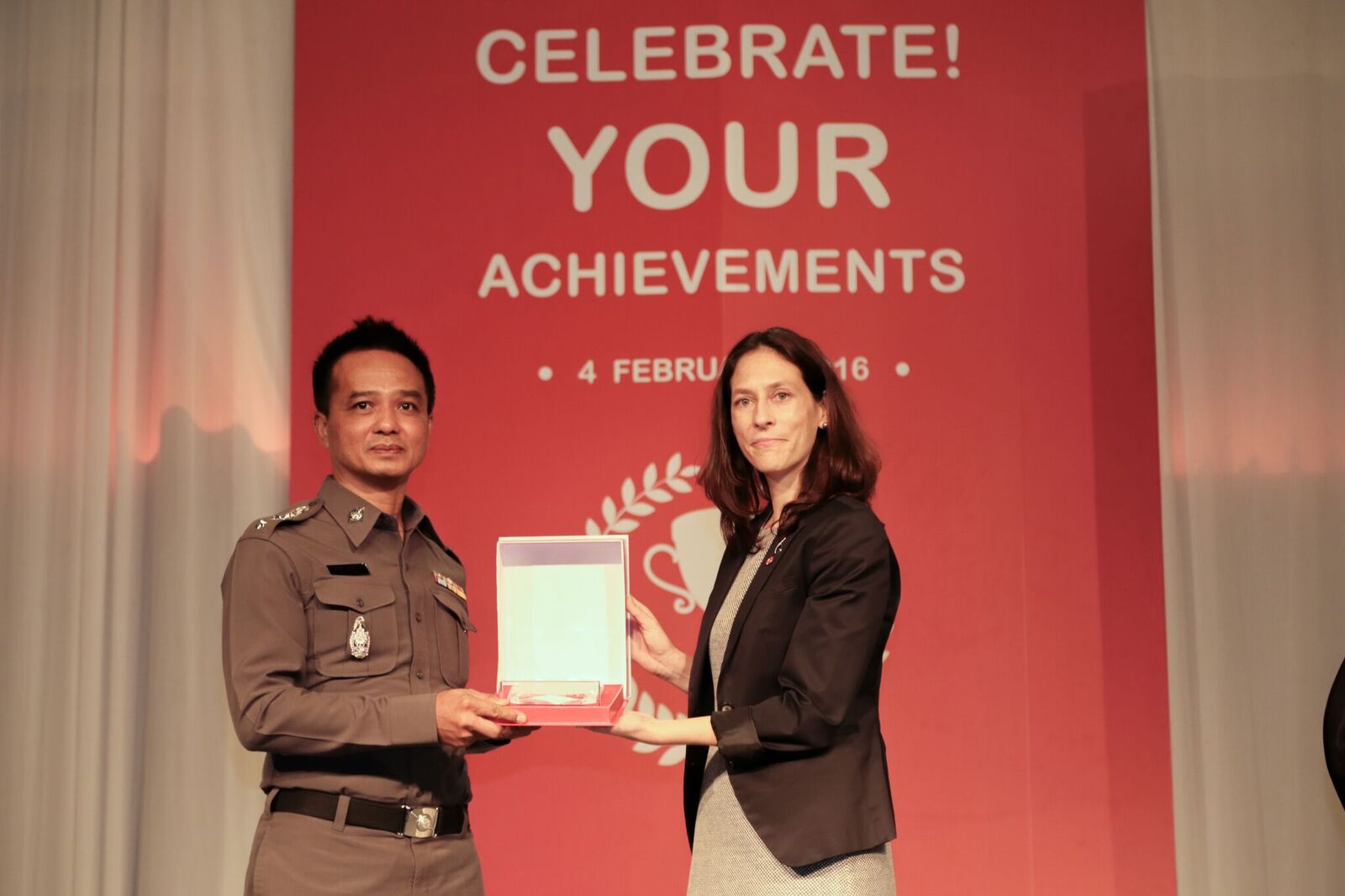 Save the Children’s Thailand Country Director, Kim Koch (right) presented awards to police, schools, government authorities and other partners who have supported the initiative.

More than 300 Bangkok schools are now participating in a Save the Children initiative to promote motorcycle helmet wearing on the school journey. Only 7% of Thai children who ride on the family motorbike currently wear a crash helmet. More than 2,600 children die annually on the roads of Thailand, while more than 70,000 are injured or disabled.

Three years into a campaign by the child rights organisation to encourage greater take-up of crash helmets, an event was organised to recognise the many partners working or donating to the ‘7% Project’. Hosted by Marriott Hotels, a supporter of the initiative, the award ceremony, which gathered teacher and police helmet ambassadors, heard from Bangkok policy leaders, including Pranee Sataya-Prakob, Deputy Permanent Secretary of the Bangkok Metropolitan Administration. Other participating organisations include ThaiRoads, the Child Safety Promotion and Injury Prevention Research Centre (CSIP), Asia Injury Prevention (AIP) Foundation, the Education Service Area Office for Bangkok, the city’s Education Department and the Department of Disaster Prevention and Mitigation. The event was co-chaired by Urvashi Sahay, Director of Save the Children’s Asia Regional Office and Kim Koch, Thailand’s country director. Save the Children is a partner in the Global Initiative for Child Health & Mobility, which is campaigning for a safe and healthy journey to school for every child by 2030.

At some of the project schools helmet wearing rates are estimated to have increased to almost a third of children, demonstrating that a combination of awareness raising, training, provision of subsidised helmets, community engagement and police enforcement can make a difference. Save the Children is also airing “Alert Little Tun” public information cartoons aimed at schoolchildren (and their parents), which are broadcast daily on Bangkok television. The event saw the unveiling of a new mascot for the campaign, “Pok Pong”, a frog character from the TV series who has suffered an injury in a motorcycle crash and later becomes determined to promote motorcycle helmet use among children.

One of the objectives of the campaign is to advocate for motorcycle helmet use to be required of families by schools and public authorities. This advocacy segment of the campaign is being funded by the Global Road Safety Partnership (GRSP) as part of Bloomberg Philanthropies’ support for NGOs. The FIA Foundation is another donor, and in 2016 additional support was provided via corporate donations to the Foundation’s Road Safety Fund, a joint initiative with the World Health Organization. The majority of funding for the campaign is provided by Save the Children Korea, while other corporate donors based in Thailand are also contributing. Another aim in 2017 is to increase the number of schools participating in the programme to more than 400, and also to ensure that road safety education is included in the national school curriculum.

“We need more urgent action, to meet the UN's ambitious global road safety targets, and to achieve in reality our vision of a safe and healthy journey for every child. And the action begins in cities like Bangkok, and with campaigns like the 7 per cent project. You are showing what is possible when a leading child rights organisation, recognised and respected across the world, takes leadership of this road safety issue and uses its convening power to build and support a citywide coalition. You are showing what can be achieved when ministers, officials and the police work together on behalf of children. And the 300 schools that have already engaged with this project: your teachers, parents, ambassadors and, most of all, the children, are demonstrating that the power to effect change lies in our own hands. So every child that you can protect with a motorcycle helmet; every school population and every parent that you can educate; every street or school entrance that can be redesigned; every new law or school uniform ordinance that can be approved and enforced; every one of these acts will make a difference.”