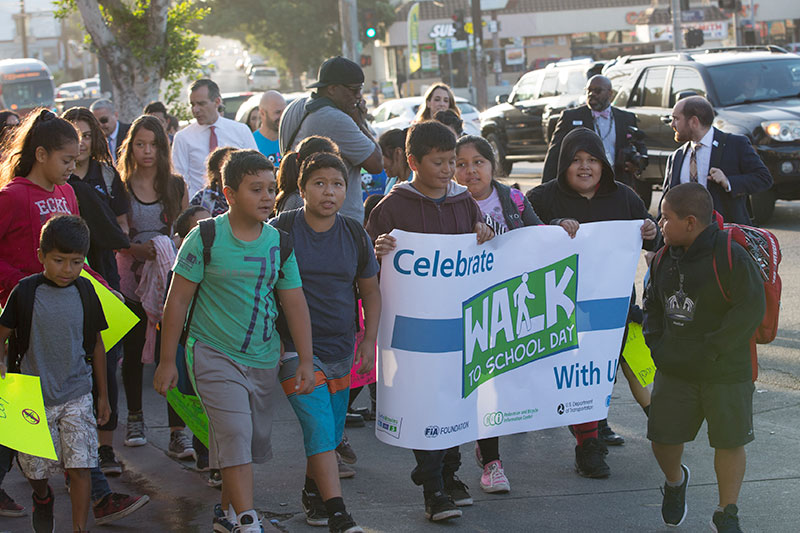 Los Angeles children take part in the recent Walk to School Day – the city is prioritizing pedestrian safety as part of its Vision Zero strategy. 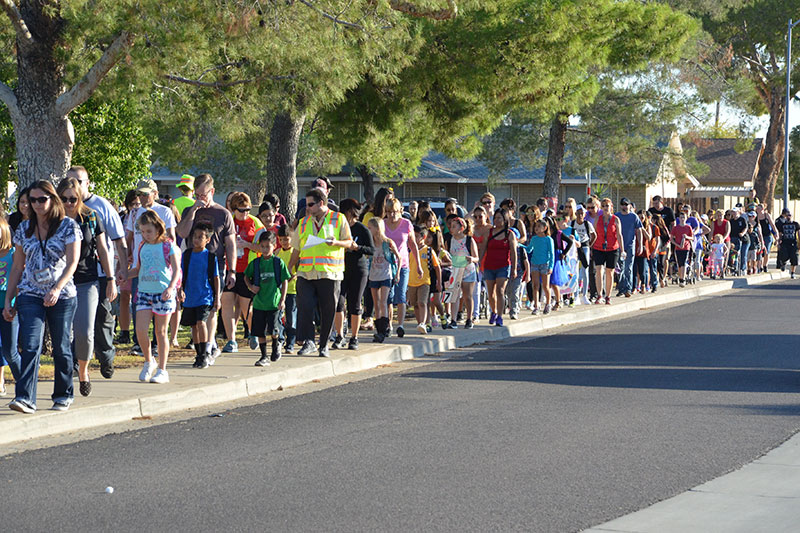 Vision Zero for Youth has launched a national award to recognize cities across the United States, leading the way in prioritizing children’s safety through Vision Zero. Los Angeles has become the first city to receive this award, presented to Mayor Eric Garcetti.

Vision Zero – the philosophy that fatal and serious road traffic injury can be eradicated through application of a Safe System, with particular focus on safe infrastructure and speed management - is gaining momentum in countries and cities across the world. Children in the United States urgently need this intervention, as road traffic crashes are the leading cause of death for children over age five.

With funding from the FIA Foundation/Child Health Initiative, UNC Highway Safety Research Center, and the Pedestrian and Bicycle Information Center, the National Center for Safe Routes to School launched Vision Zero for Youth in 2016. The initiative encourages communities to create safer streets starting where youth walk and bike. For cities considering or currently implementing Vision Zero, Vision Zero for Youth emphasizes the need to prioritize children and youth.

With the help of National Center for Safe Routes to School, Mayors around the US are committing to Vision Zero for Youth. This year, the National Center for Safe Routes to School has announced that Los Angeles and the Los Angeles Unified School District are the recipients of the 2017 “Vision Zero for Youth” Leadership Award. This national award recognizes cities that are leading the way in prioritizing children’s safety through Vision Zero.

The City of Los Angeles and the Los Angeles Unified School District have combined efforts to integrate Safe Routes to School activities and policies into the city’s larger transportation plans, including Vision Zero.

“Children should be able to make their way to and from school safely,” said Eric Garcetti, Mayor of the City of Los Angeles. “Continuing to make strategic, data driven approaches to engineering, enforcement, education, and evaluation, in partnership with school communities, will make L.A.’s streets safer.”

“Students who feel safe and secure on their journey to school are more likely to arrive to school ready to learn,” said Dr. Michelle King, Superintendent of Los Angeles Unified School District. “Walking and biking to school can play a leading role in reversing health problems in children, calming traffic and reducing congestions in school zones.”

“Not only has Los Angeles demonstrated exemplary work in Safe Routes to School and given a model for how improving safety for children should be at the core of Vision Zero initiatives, they were also one of two cities to celebrate the first Walk to School Day in 1997,” said Nancy Pullen-Seufert, Director of the National Center for Safe Routes to School. “The city’s approach to including children in Vision Zero embodies the concept of Vision Zero for Youth: Safe Routes to School is a core strategy of their Vision Zero plan; their efforts are data driven and prioritize safety improvements based on crash data and the number of children walking; there is a strong partnership between the city and school district which includes data sharing; and there is strong support for safety culture and infrastructure change, especially by reducing speeds in school zones.” The National Center for Safe Routes to School also launched a website for resources related to Vision Zero for Youth, in honor of International Walk to School Day: Visionzeroforyouth.org.

Vision Zero for Youth is also being implemented in Mexico City, through Child Health Initiative partner Institute for Transportation Development and Policy. “Vision Zero for Youth can help us implement Vision Zero all over the world. It recognizes that sometimes, it is difficult to gain political commitment to an ambitious goal to achieve zero deaths on roads. However, it is often easier if we start with the least controversial and most vulnerable population – children,” said Natalie Draisin, North American Director and UN Representative of the FIA Foundation. “It ensures that children’s voices are heard in implementing Vision Zero. We extend our congratulations to Los Angeles in putting children at the core of their Vision Zero efforts, demonstrating excellent leadership for other cities to follow.”