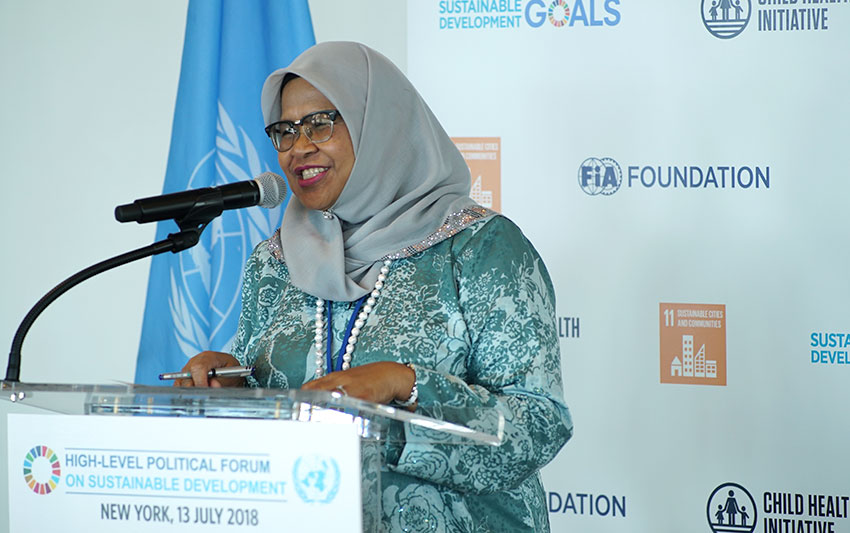 UN Habitat Executive Director Maimunah Mohd Sharif: “A safe and healthy journey to school for every child is prioritised in the New Urban Agenda.” 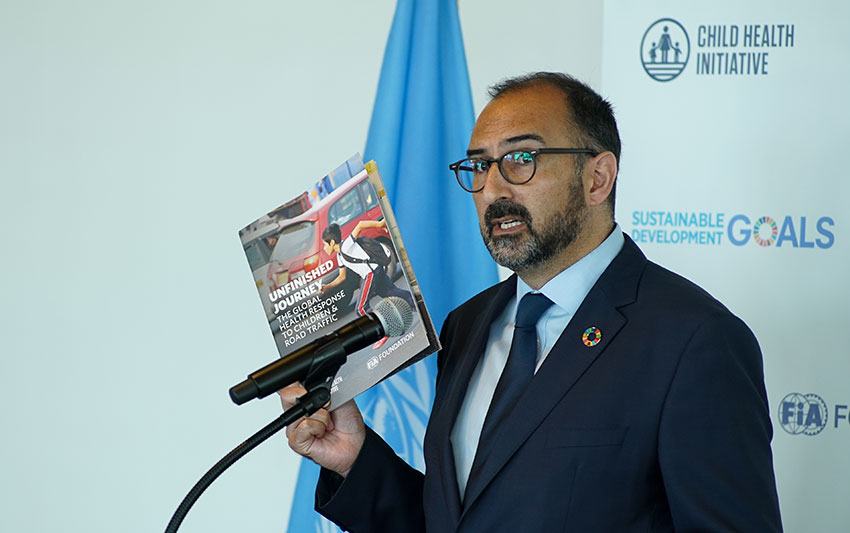 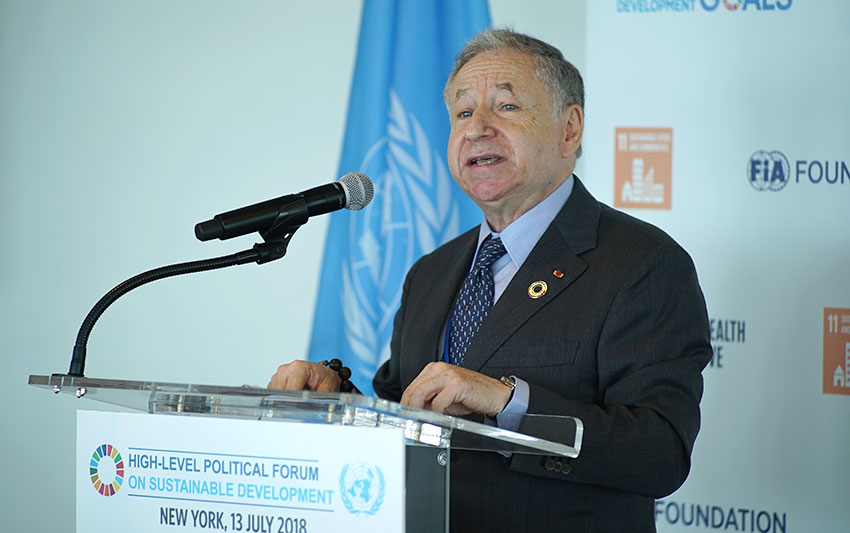 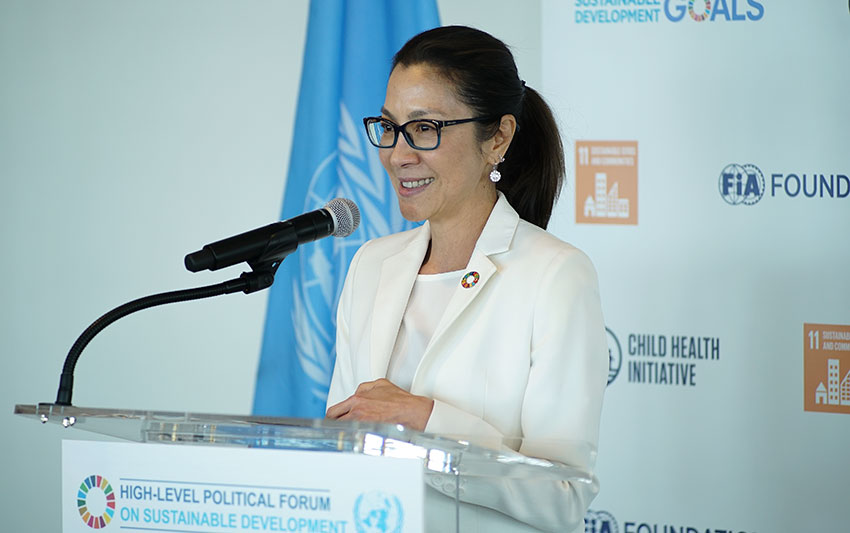 Michelle Yeoh, UNDP Goodwill Ambassador for the Global Goals: “Our challenge is to change our cities. To make them fit for the future, fit for our children. Because these are their streets too.” 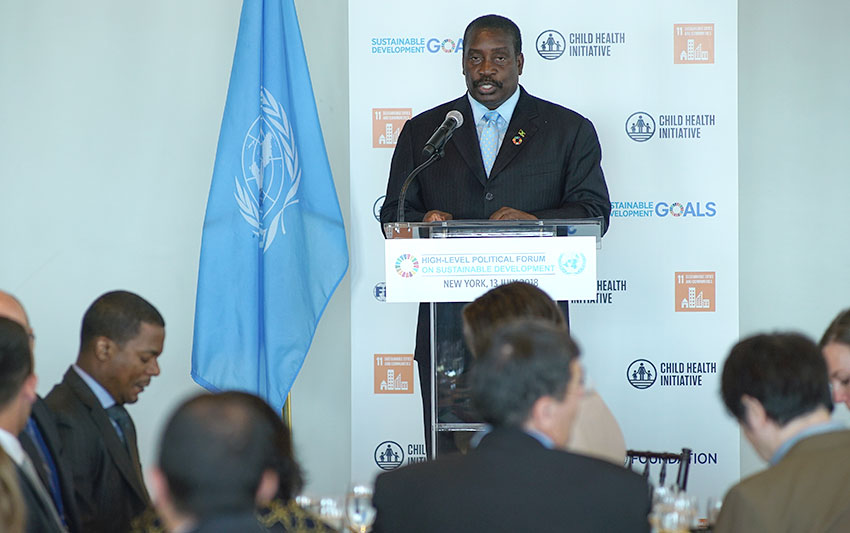 Jamaica’s Minister of Transport Robert Montague pledges his country’s support for a Special Summit on Child and Adolescent Health. 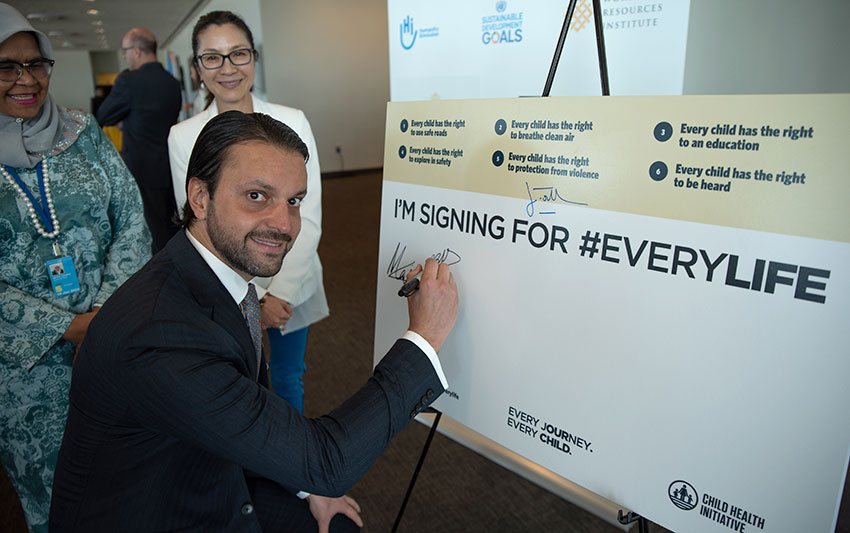 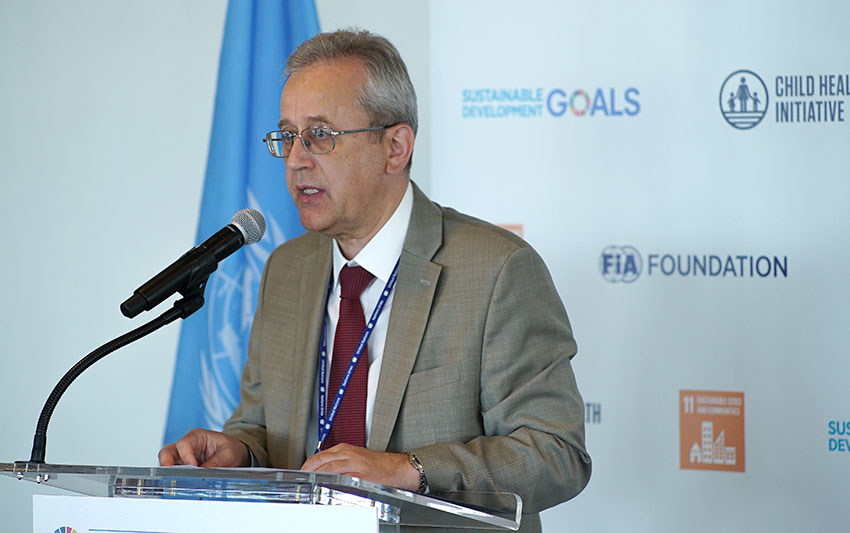 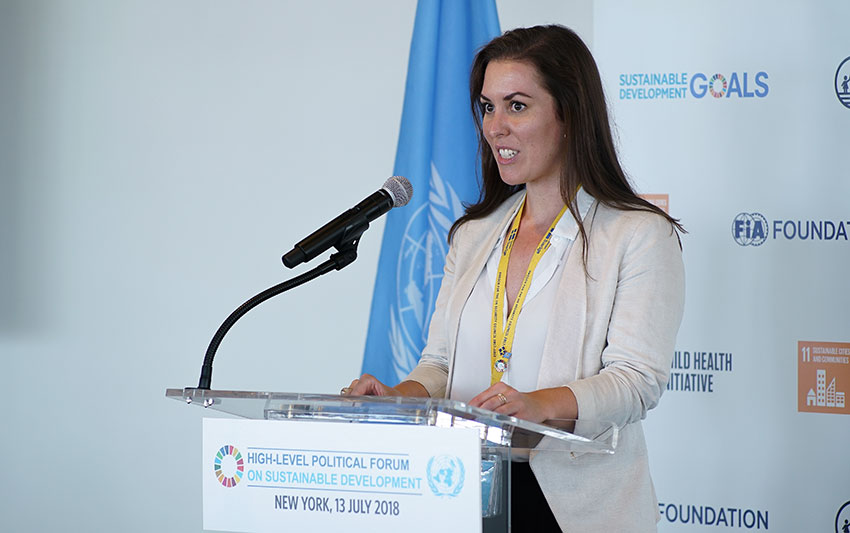 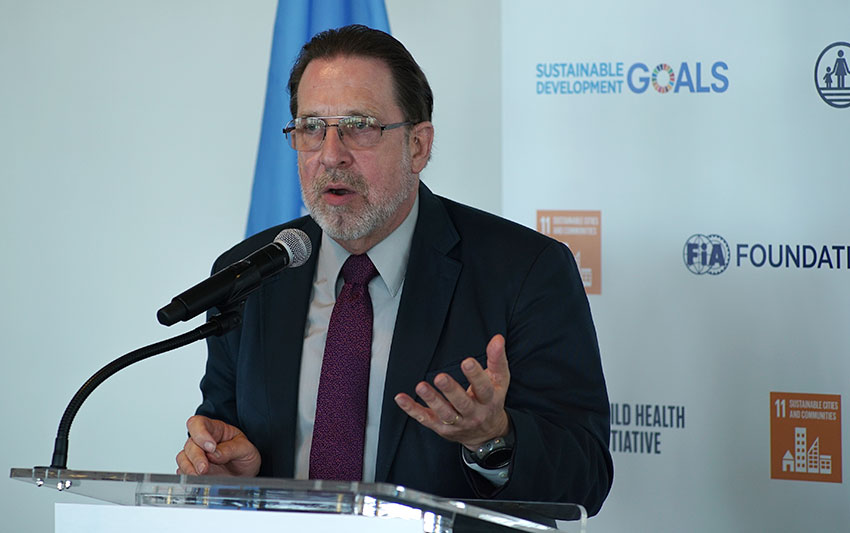 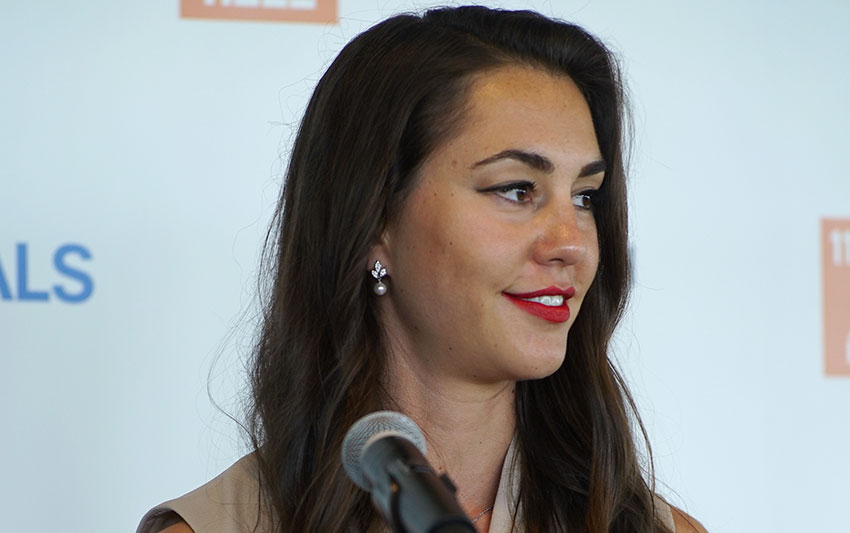 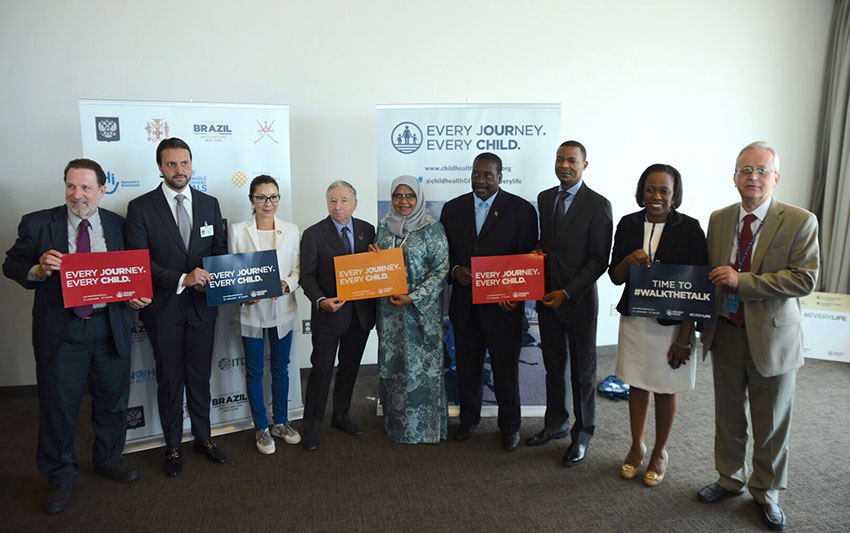 At the UN High Level Political Forum, the Child Health Initiative convened leaders to discuss measures to improve safe and sustainable mobility in the urban context, and the need to prioritize children. The meeting, ‘Every Journey, Every Child: A Global Priority for Urban Sustainable Development,’ was framed in the context of SDG 11, focusing on safe, sustainable cities. The meeting was co-sponsored by UN Missions which have been long-time road safety leaders: The Sultanate of Oman, Russian Federation, Brazil, Jamaica, and Sweden. Other co-sponsors included the FIA Foundation, World Resources Institute, Institute for Transportation Development and Policy, NACTO-Global Designing Cities Initiative, and Humanity and Inclusion.

The Child Health Initiative’s call to protect child rights to safe and healthy mobility builds on the SDGs and Habitat III New Urban Agenda’s prioritization of ‘a safe and healthy journey to school for every child.’ Delivering the keynote, Maimunah Mohd Sharif, United Nations Under Secretary General and Executive Director of UN Habitat recounted her personal experience with the connection between safe roads and access to education: “When I was small, I lived in a small village. We had no electricity. I cycled to school. I fell off my bike a few times – there was no hospital to get treatment. I still have the scars on my leg. I know what safety is about. When I left home every day, my mom said, ‘Be careful when you go to school. Only education can change your life.’ I suffered because of poverty. I know what hardship is about. I know from my experience and from what many other families go through, that we must make safety a priority. We have a duty to ensure that safety is in place for the next generation.” UN Special Envoy for Road Safety and President of the FIA, Jean Todt, commended UN Habitat’s focus on making roads safe and healthy for children, saying, “Global platforms like the New Urban Agenda play a large part in making sure road safety is not only a consideration, but also a measurable outcome.”

To better integrate action on traffic injuries and pollution into SDG frameworks, such as the ‘Every Woman, Every Child’ strategy, and the New Urban Agenda, the Child Health Initiative is calling for a UN high level Summit on child and adolescent health. Opening the event, the FIA Foundation’s Executive Director, Saul Billingsley, said, “In cities across the world road traffic crashes and dirty air are killing our young people. Car centric urban policies are contributing to childhood obesity and other non-communicable diseases. The international community needs to move urgently from diagnosis to action. We are calling for a UN Special Summit to give this issue political momentum and deliver real policy integration.”

The Child Health Initiative is working with many countries to fulfil the goal of safe and healthy journeys for all children. For example, in Jamaica, the Initiative is working with the government, UNICEF, JN Foundation, and road safety NGO Amend to demonstrate the potential of simple infrastructure safety improvements to transform safety on the journey to school. Jamaica’s Minister of Transport & Mines, Hon. Robert Montague, said: “I call for a UN Special Summit on Child and Adolescent Health. We must address this global crisis. Making our roads safe for children must be our gift and legacy for the future.”

Action is urgent with the approaching end in 2020 of the Decade of Action on Road Safety, as well as SDG 3.6 on road safety, though the FIA Foundation has called for its extension to 2030. Some progress has been made towards reaching the goal, but not enough. Michelle Yeoh, UNDP Ambassador for the Global Goals, said, “We can’t deliver education for all if thousands of children are killed and maimed by speeding traffic as they walk to school. We can’t build a sustainable urban future if our streets are filled with toxic air. So it is up to all of us to make the urgent case for change - because road traffic deaths are still rising. We are further away from achieving the SDG target than we were in 2015.”

Some countries are striving for the SDGs through Vision Zero, showing that reaching zero deaths on the roads is both necessary and achievable. Hon. Alexandre Baldy, Minister of Cities, Brazil, said: “We are aiming for zero deaths. There is no other number other than zero that can be acceptable when we are speaking of human lives.” H.E. Sergey Kononuchenko, Deputy Permanent Representative and Ambassador, Mission of the Russian Federation to the UN, also discussed a range of programmes undertaken in Russia targeting child safety.

The meeting was one step among many to increase attention to this global epidemic, claiming the lives of 1.4 million and injuring 20-50 million others each year. Elin Nilsson, Second Secretary of the Mission of Sweden to the UN, described Sweden’s progress in reducing child road traffic deaths under its ‘Vision Zero’ policy and said: “In 2020, Sweden will host the Third Global High Level Conference on Road Safety. The aim will be to review the progress in achieving the SDGs. Children are the future and deserve safe and healthy lives. We cannot leave anyone behind.”

The lessons New York City learned from Sweden exemplify the power of sharing successes and challenges internationally. The High Level Political Forum is designed to facilitate such knowledge exchange. For the past three years, the FIA Foundation has invited countries submitting Voluntary National Reviews on their progress towards the Sustainable Development Goals to include a focus on SDGs related to safe and sustainable mobility. Concluding the meeting, the FIA Foundation’s North American Director and UN Representative, Natalie Draisin, said: “More and more countries are including transportation in their voluntary national reviews each year. Thanks to our partner SLoCaT, we know that 38 out of 40 VNRs this year have contained references to transport. We are grateful to those countries, setting the stage for more action. If we don’t put our money where our mouth is, the world’s most vulnerable children will inevitably lose in the race to achieve the SDGs. That’s why it is so important to hear high level officials echoing the Child Health Initiative’s call for a Special Summit on Child and Adolescent Health. Focusing on youth is not only a practical way to deliver the SDG agenda. It is also a moral imperative. In the end, it’s about saving kids’ lives.”