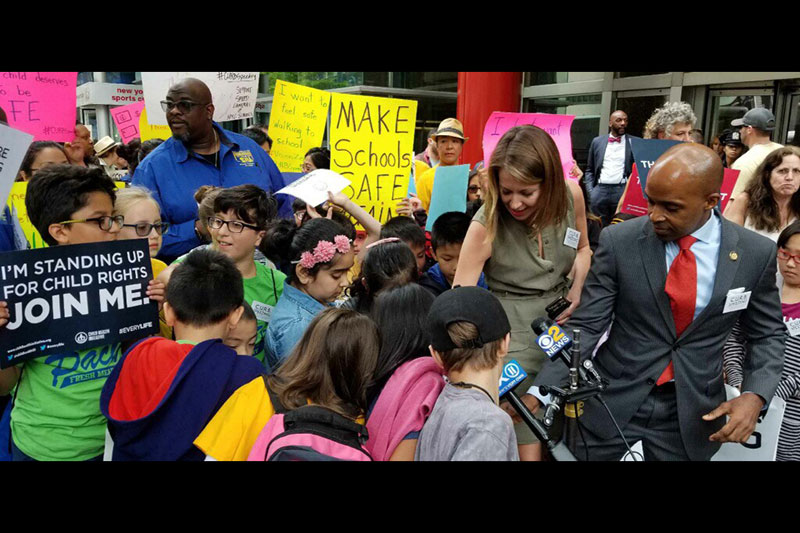 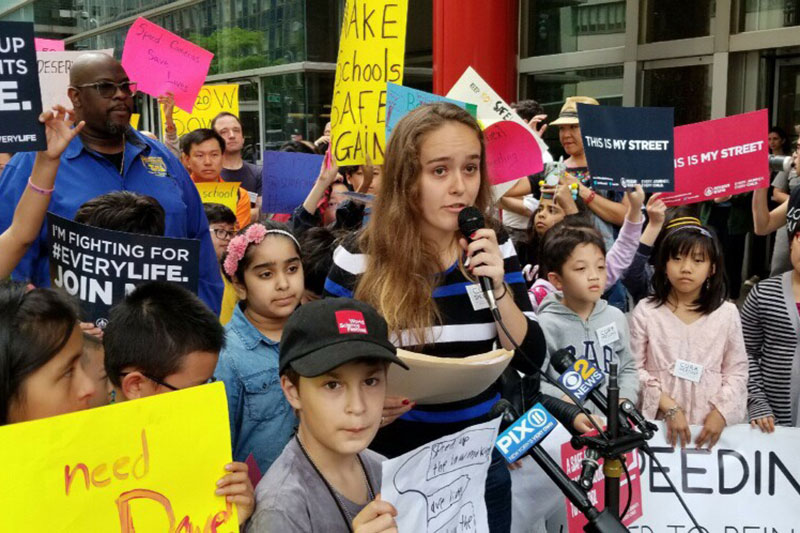 Alison de Beaufort has been a fearless youth leader placing youth at the center of Vision Zero in New York City. 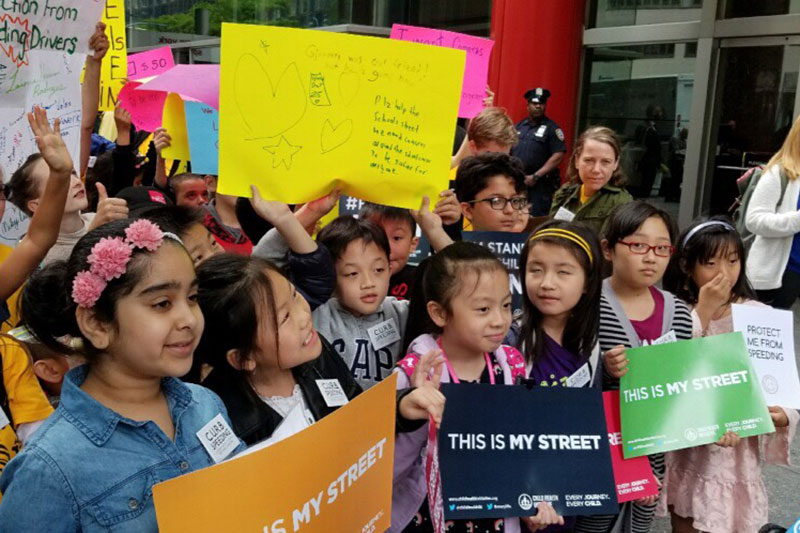 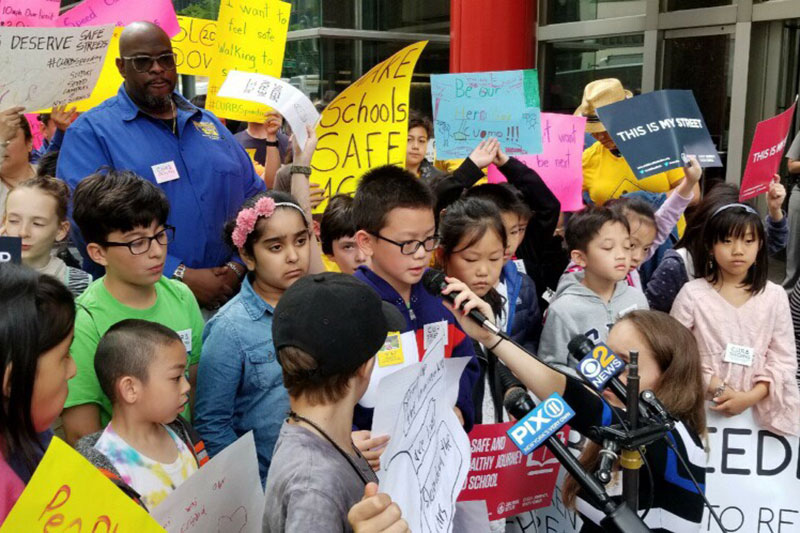 Preston Liao speaks about his little sister, who was killed walking with their grandmother. 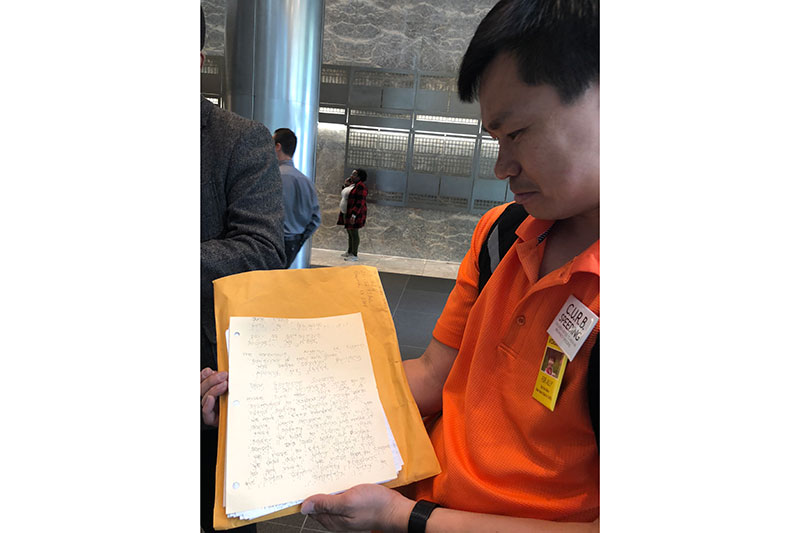 Preston’s father, Hsi-Pei, delivers letters from students, including this one, in braille, asking the Governor for support. He wants to prevent tragedies like the death of his three-year-old daughter. (All photos courtesy of James McCray, Hy-Sync Media.)

New York City schoolchildren rallied outside New York Governor Cuomo’s office, convincing him to support the city’s speed safety camera program. Their voices join those of children around the world, speaking up for their right to safe and healthy streets.

Schoolchildren from across New York City urged lawmakers to protect them through speed safety cameras in schools. Currently, a state law allowing for such cameras in 140 school zones, or about 7% of total schools, is set to expire in July.

The students are joined by city officials, including Mayor Bill de Blasio, and hundreds of groups representing hospitals, schools, and parents, urging that the law be extended to 2022 and expanded to another 150 schools. The administration says that speeding during school hours dropped 63%, and pedestrian injures decreased by 23% in areas with speed safety cameras. City officials credit $50 tickets for going 11 mph over the 25 mph speed limit for deterring bad behavior. The Mayor, who spearheaded the city’s Vision Zero program, said that the city will do all it can to protect New Yorkers, but “it’s time that leaders in Albany did the same thing. There is more to be done and it must be done quickly.”

The student rally caught the attention of Governor Cuomo on his way to work. Reporter Jill Jorgensen said it best, “I asked about a thousand times yesterday whether the Governor supported this bill/would push it. I couldn’t get an answer, but these kids could.” The Governor’s two top deputies, Melissa DeRosa and Alphonso David, attended the rally to express his support. “[The governor] knows that these streets are these kids’ streets and we want to make sure that they stay safe,” said DeRosa. “You’ve got our support, anything we can do.”

The children are part of a worldwide movement, urging leaders to protect their right to safe and healthy streets. Children’s voices are at the heart of the Child Health Initiative, which co-sponsored the rally. At the rally, Natalie Draisin, Director of the North American Office of the FIA Foundation, said, “You are not alone. Kids like you all over the world are demanding change. Those voices – your voices – are at the heart of our Initiative, striving for safe and healthy journeys for all kids. Road traffic crashes are the leading killer of youth around the world. It’s a public health epidemic, and our country is not immune. There is no excuse for Albany not to enact this life-saving program. The country and the world are looking to New York as a leader. And today, I’m looking at many young leaders. The Child Health Initiative urges Albany to hear your voices, to protect our future.”

The rally, covered by major media outlets, was led by the Vision Zero Youth Council and also co-sponsored by Local 372, Community Education Council Districts 13 and 15. Alison de Beaufort founded the Council in 2014 after three of her classmates were killed by reckless drivers in one year. “It’s not political. We want to make sure that no more kids are being killed on their way to and from school, so that we can live out our lives like any other person,” she said. A high school senior, she personally collected over 600 signatures in support of the program and delivered them to the Governor. She was joined by students as young as six, speaking about their brothers, sisters, and friends who were killed on city streets.

Nine-year-old Preston Liao spoke about his younger sister Allison, who was killed while crossing the street with her grandmother. “My little sister was killed by a reckless driver when she was three-years-old. I wish I had super powers to save Ally’s life by teleporting into the (past). Even though I don’t have super powers, I could still ask for speed safety cameras to protect me, my little brother Aidan and other kids.”

Already, six children died on the city’s roads this year, compared to nine in all of 2017. This year, the city is at risk of losing nearly as many as in the past two years combined, according to Tom DeVito, Senior Director of Advocacy at the nonprofit Transportation Alternatives. Nonetheless, a report in March showed that total traffic fatalities last year fell 7%, with pedestrian deaths dropping from 148 to 101.