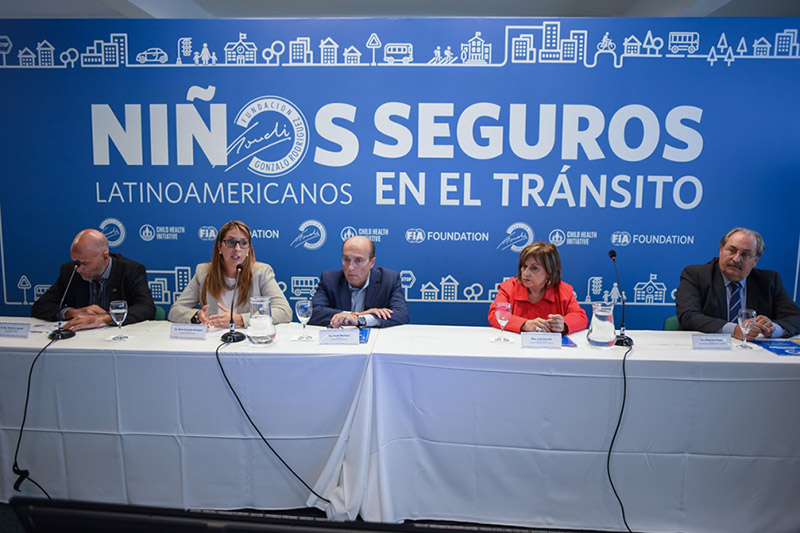 Mayor of Montevideo, Daniel Martínez, (centre) responded to the findings. 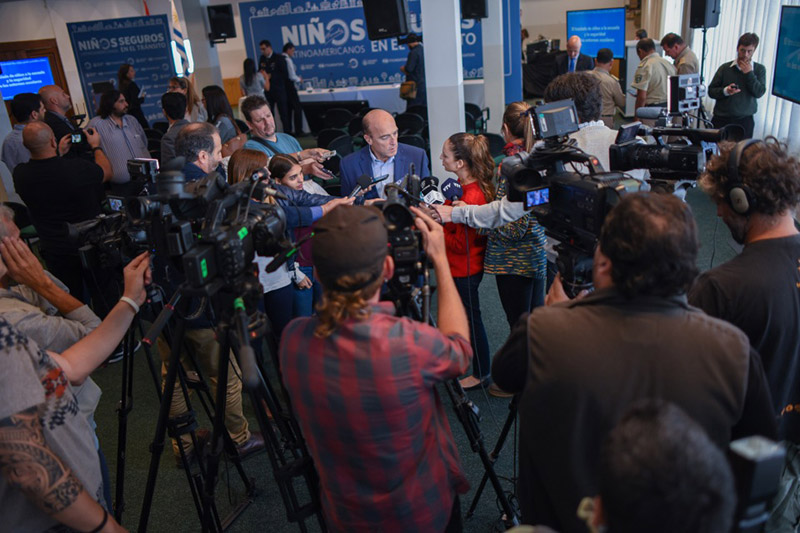 A press conference was organised to promote the report.

A combination of street infrastructure design improvements and more sustained road safety education are needed to better protect schoolchildren in Uruguay, a new report by Fundación Gonzalo Rodríguez, funded by the FIA Foundation, has concluded. The report calls for greater political commitment to tackling the issue.

Within the context of the "Children Safe in Traffic in Latin America" programme, the Fundación Gonzalo Rodríguez together with the Uruguayan Primary Education Board (CEIP), national and provincial officials, launched the report “Child transport to school, and safety in school zones” and the public campaign “Don´t repeat it this year” that identifies, and attempts to modify incorrect behaviour in traffic observed in the report. A press conference, attended by the Mayor of Montevideo, was held on 15th March.

“Child transport to school, and safety in school zones" is a report composed of three studies conducted by the Fundación Gonzalo Rodríguez´s Research Department through FACTUM, a telephone survey to get to know how children go to school; an observational study of child pedestrians in the school surroundings on risk behaviours; and an infrastructure survey with Star Rating for Schools, a tool developed by the International Road Assessment Programme (iRAP) that rates school zones´ safety from 1 to 5 stars. These two last studies were conducted in 54 public schools in Montevideo and Canelones.

María Fernanda Rodríguez, President of the Fundación Gonzalo Rodríguez, explained the selection of provinces was based on the fact that they “concentrated the largest populations. Actions with different stakeholders can later be coordinated to expand this study nationwide.”

Rodríguez highlighted that “although we know that all road accidents do not happen in the school zones, these are the ideal settings to understand children and parents´ behaviours, and how they circulate.” And she added, “Education is a good context to generate future changes.”

"Measures proposed are low cost and high impact and have already been tested in other countries. Our vision is 0 children victim of road accidents. There are countries that have achieved this and we want the same for our children. We believe that by working in coordination between the different institutions and with a more comprehensive approach we can achieve it," she concluded.

The survey of road infrastructure in school zones reveals that Montevideo has an acceptable performance (average of 3.4 stars), not so Canelones (average of 2.6 stars). An analysis by province shows the heterogeneity of Canelones and the increase in Montevideo of the star rating as socio-cultural characteristics of households improve. This confirms the rating variation by region, where the west of Montevideo is the most disadvantaged. The telephone survey shows that children in Montevideo and Canelones go to school mainly by car (44%) and on foot (35%). In Montevideo, the observational study of child pedestrians highlights that 44% cross the street in the middle of the block and that an important percentage "does not look before crossing" when crossing on the corner (35%), along the pedestrian crossing (42%) and in the middle of the block (44%).

After the presentation of data, Daniel Martínez, Mayor of Montevideo, highlighted the importance of research because it provides "data to work on". The mayor was surprised by "the high percentage of people crossing in the middle of the block and not using safety measures to transport children." "There´s a lot to be done," he concluded.

The Advisor to Canelones Mayor, Francisco Legnani, also highlighted the relevance of this work "because it focuses on the most vulnerable road users who are our children". He commented that "road safety and prevention work are essential together with education at home".

Alejandro Draper, Director of UNASEV, mentioned the fact that all the institutions present committed to the same cause: "I think the fact that all those fighting against the scourge of road accidents are supporting this very good work by the Foundation is to be highlighted ".

At the closing, María Fernanda Rodríguez thanked the institutions’ commitment and presented the Road Safety campaign "Don´t repeat it this year” jointly created with UVA communication agency and based on the report´s results. The campaign already has the support of the municipalities of Canelones and Montevideo, UNASEV, Ministry of Public Health, CEIP, IMPO, Tres Cruces and several media outlets.