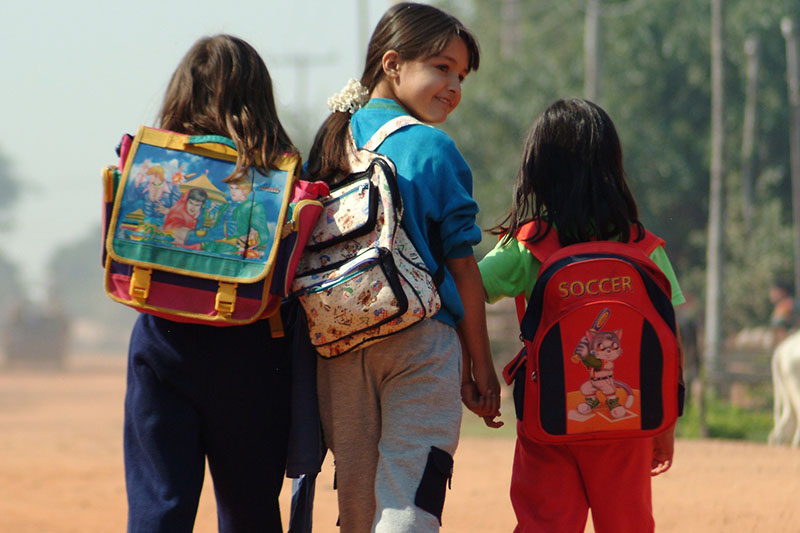 Paraguayan children on the journey to school (credit UNICEF Paraguay). 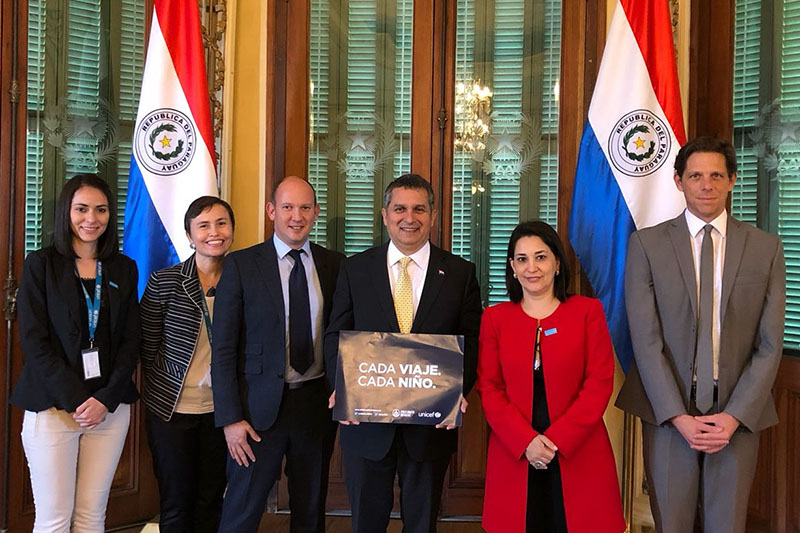 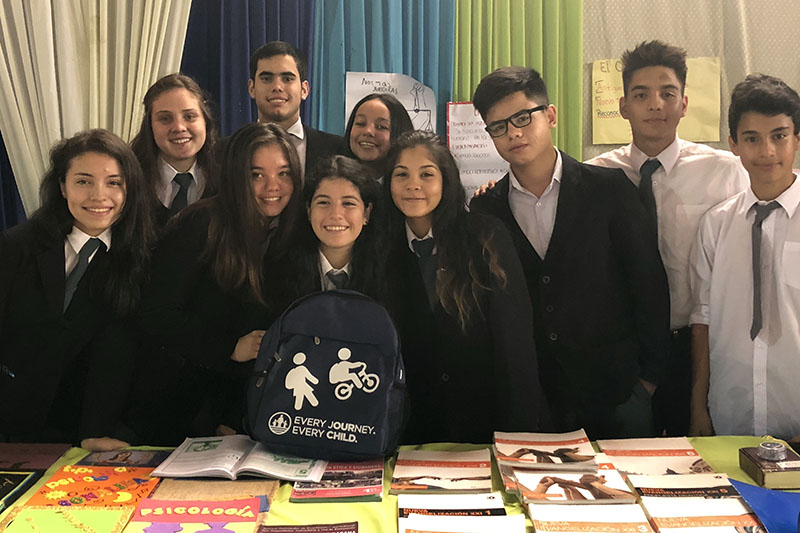 As part of the project young people have been working on road safety in and outside school.

A strong coalition convened by UNICEF Paraguay is stepping up its work to combat road traffic injury and provide safe school journeys for children.

In its first phase of work, UNICEF has formed a partnership involving a full range of government agencies, civil society and the private sector in response to high levels of road traffic injury and fatality among children and adolescents. Young people are at the forefront of the work, leading an extensive campaign on road safety in Paraguay.

Now entering a new phase, UNICEF Paraguay is collaborating with Child Health Initiative (CHI) international partners in a coordinated effort to reduce child road traffic injuries and fatalities. At the end of October 2018, the CHI, and experts from Amend and iRAP engaged with UNICEF, its government and non-government partners.

UNICEF and the CHI held a range of meetings on 29-31 October with government ministries including the Office of the President, the Ministry of Education, and the Municipality of Asunción. The new Paraguayan Presidency of Mario Abdo Benítez is planning to make road safety a national priority.

UNICEF Representative Regina Castillo said: “We are all agreed that the level of child road traffic injury in Paraguay is both shocking and unacceptable. Every day 31 teenagers become casualties on the roads. Therefore, road safety must be a national priority that cannot be postponed. "

“What is perhaps most encouraging is the reaction of young people themselves. They have stepped forward and helped lead the campaigning, telling the adult world what needs to be done. We hope to build on this and there are positive signs that the government, the municipality and all the key stakeholders are going to take further action.”

FIA Foundation Deputy Director Avi Silverman said: “Partners at all levels – municipal, national and international – are coming together to address the heavy burden of road traffic injury on Paraguay’s young people. In Asunción we met a trauma surgeon who that morning was forced to amputate the leg of a five-year-old girl as a result of her road traffic injuries. This was a stark reminder of why urgent action is needed. Young people have been taking the lead in calling for action here in Paraguay. The policy makers must now follow.”

UNICEF is working with the national government including the Ministries of Education, Health, Transport and Public Works. It has engaged closely with the police, and municipal authorities of Asunción and Central. Civil society and the private sector play key roles, with the Touring y Automovil Club Paraguayo (TACPy) also a major partner.

Inception workshops on safe infrastructure were coordinated by UNICEF Paraguay with input from Amend, iRAP and the CHI. UNICEF and the CHI also gave a detailed briefing to the Municipality of Asunción. The next steps on the programme will include identification of high risk schools for infrastructure improvements. In collaboration with TACPy, iRAP’s ‘Star Ratings for Schools’ methodology is beginning to be used around some school areas, with the aim of being expended across further schools.

In a first phase, UNICEF Paraguay has worked with 29 schools and helped mobilise 800 youth volunteers aged 13-15 years old in a campaign titled “Vale una vida” (It’s worth a life). The young volunteers helped lead the design and implementation of the campaign and have taken part in over 400 activities and events in over a year since its introduction in 2017. Collaborating with the police, young campaigners give out “Vale una vida” cards to adult motorists, motorcyclists and drivers, praising good behaviour and also pointing out where they could improve on road safety.