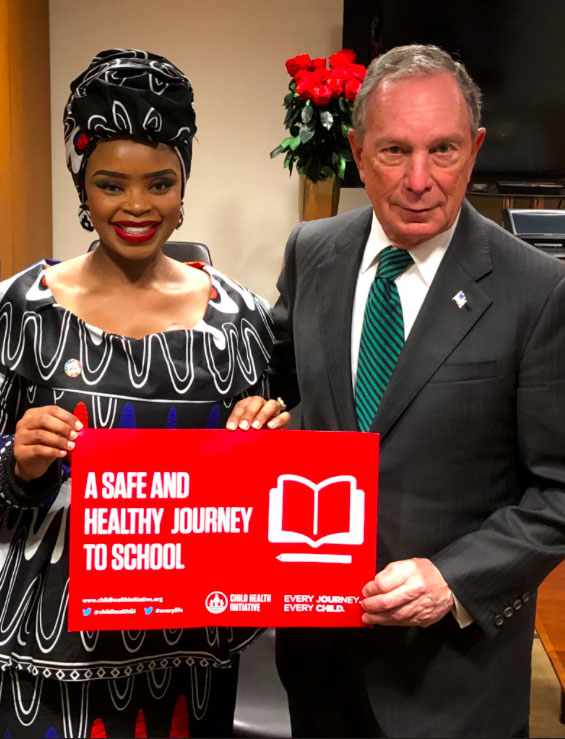 Michael Bloomberg with Zoleka Mandela prior to the High Level Meeting. 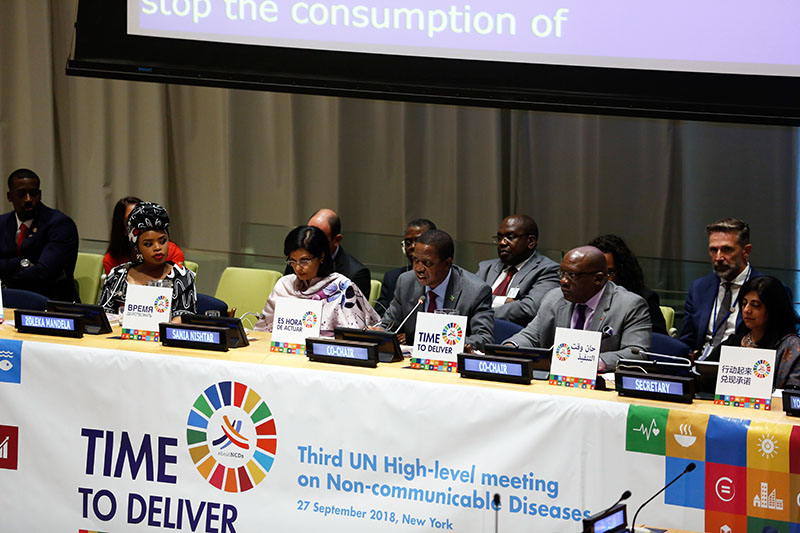 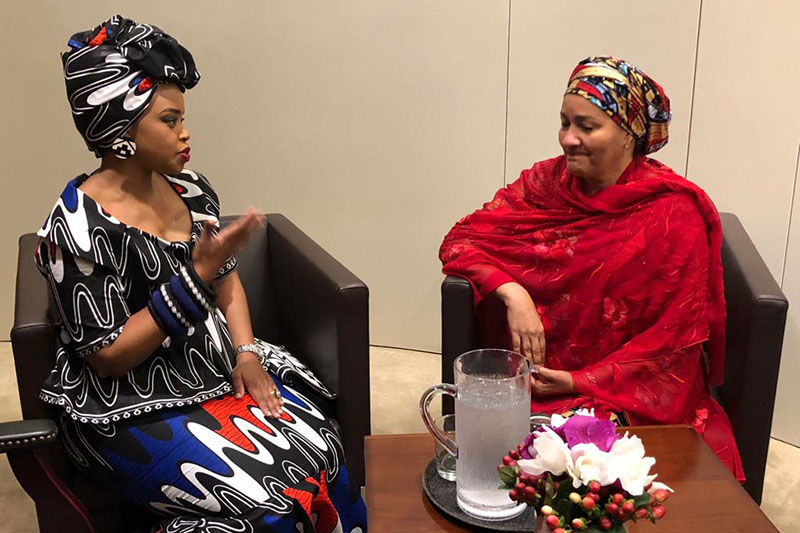 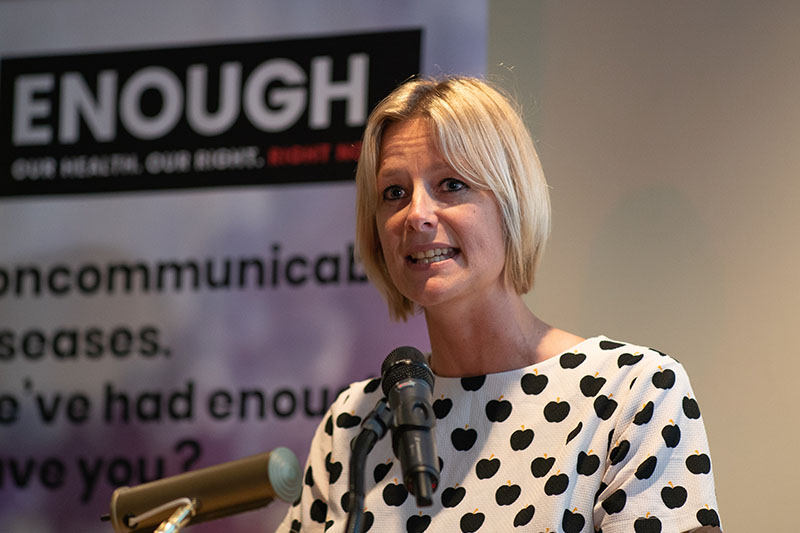 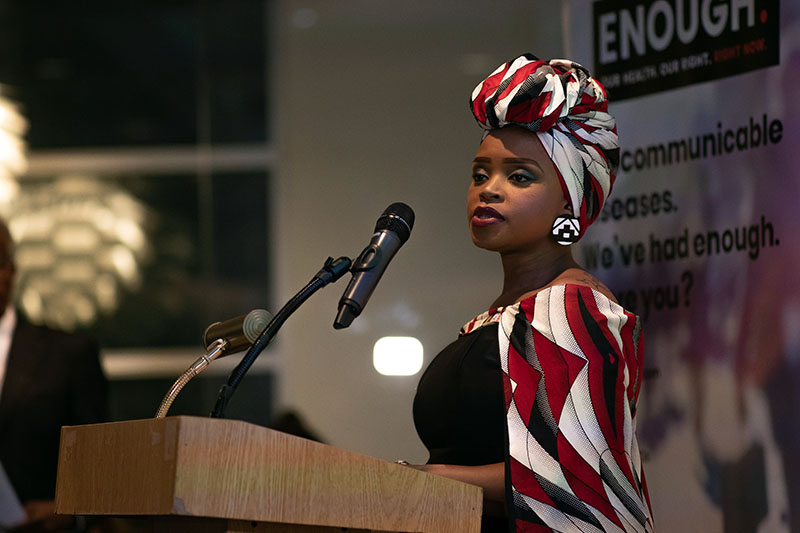 Speaking at a series of high-level meetings at the 73rd Session of the United Nations General Assembly, Zoleka Mandela called on leaders to answer massive global health inequities, with 85% of all NCD related premature deaths and 90% of road traffic fatalities occurring in low- and middle-income countries.

As a two-time breast cancer survivor, and a mother who lost her teenage daughter to road traffic injury, Zoleka Mandela spoke of her first-hand experiences during a powerful address to the UN’s Third High Level Meeting NCDs. Where access to health care and early detection services saved her life, she urged governments to consider the millions of people who do not have access to treatment, who suffer or die because there is no efficient health system.

“Toxic air poisons our children’s lungs on a daily basis. And our urban environments are often too dangerous for our children to grow and explore the world. My own daughter, my beautiful Zenani, was killed on the road in Johannesburg. Thousands of children are killed or injured every day by road traffic. Millions of children breathe and suffer from polluted air. They suffer, and we suffer because the basic policies are not in place, enforced or implemented.”

Calling for immediate action on urban health issues could not have been more appropriate, with air pollution, urban design, transport and safe environments for children recognised as key areas of focus for the prevention of NCDS in the Political Declaration. By campaigning for safe and healthy journeys to school for every child, the Child Health Initiative is bringing these issues into sharp focus.

Zoleka Mandela met with senior child rights leader UNICEF Executive Director Henrietta Fore, and UN Deputy Secretary General Amina J Mohammed, to brief them on the Child Health Initiative, highlighting that tackling intersecting issues effecting child health in cities is a key area that must be addressed for the delivery of the Sustainable Development Goals.

Beneath the pageantry of the opening of 73rd session of the UN General Assembly, there was an air of frustration on the lack of progress made across the board on the Sustainable Development Goals, with the majority of countries way off target to reduce NCD and road traffic injury related deaths. Many speakers joined Zoleka Mandela and Michael Bloomberg in calling out the lack of political will to invest in proven solutions.

Speaking at the NCD Alliance reception, CEO Katie Dain described the High-Level Meeting as a ‘do or die’ moment for action on NCDS and expressed disappointment that the Political Declaration was not far reaching enough to force action commensurate to scale of the problem.

“Let’s join together with a strong voice and say enough to non-communicable diseases. Enough to these preventable epidemics – both NCDs and road traffic injury. We can, and we must defeat them. The time for empty words is surely over. For our health, our future, and the future of our children, we must not fail.”

“Surgical care is often the difference between life, death, and disability. We cannot reduce fatalities on our roads without strong post-crash care via organized, integrated, developed pre-hospital and emergency care systems. However, there is a fatal disconnect between these areas and others, causing us to fail in eradicating NCDs, and in protecting our children who are suffering most. We cannot afford to fail. We must come together by holding a first ever UN Special Summit on Child and Adolescent Health to refocus and redouble our efforts. Ministers and Ambassadors are voicing their support, and we encourage you to voice yours at everylife.org.”