Shining a light on adolescent health 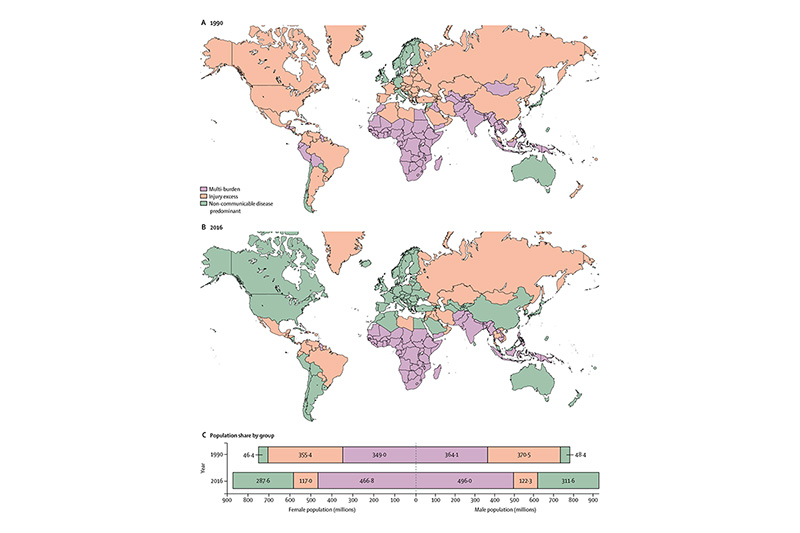 The report highlights the highest risk countries for injury and NCDs. 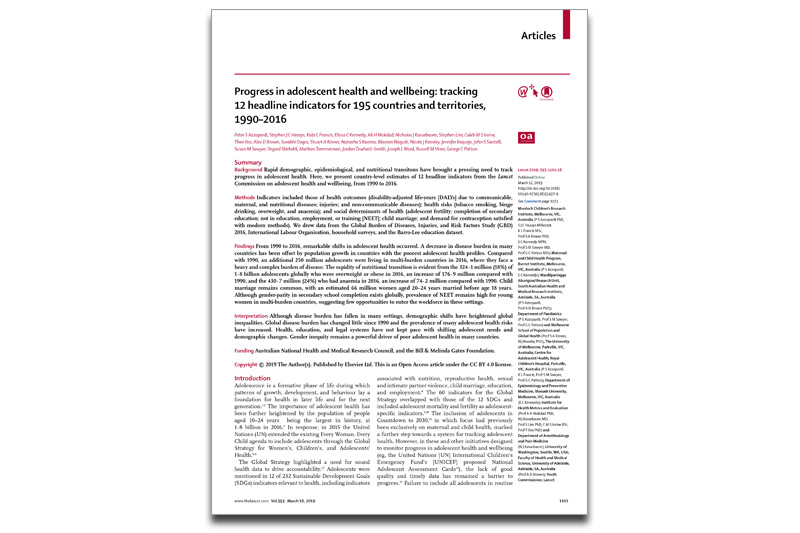 "Progress in adolescent health and wellbeing: tracking 12 headline indicators for 195 countries and territories, 1990–2016."

The case for a comprehensive international response to improve adolescent health has “never been stronger”, according to the latest issue of The Lancet.

The March 2019 study from the prestigious medical journal reflects a growing concern that adolescent health is not being adequately addressed in the Sustainable Development Goals. Its findings are in line with advocacy from the FIA Foundation, along with other global organisations, calling for increased political and financial commitment for adolescent health. Such commitment would address all the major adolescent health burdens, which include road traffic injury as the number one killer of young people.

The report’s authors, who include Professor George Patton, Chair of The Lancet Commission on Adolescent Health & Wellbeing, note that while there are some examples of improvements, “the adolescent health challenge is greater today than it was 25 years ago. The case for comprehensive and integrated investments in adolescent health, growth, and development has never been stronger.”

The study highlights that adolescents have been “largely absent in global health investments” which means that the disease and injury burden for young people is not being adequately addressed. Together with low levels of investment, a major barrier to progress is a lack of quality data, says the report. It urges the international community urgently to agree a “minimum set of well-defined indicators specific to adolescent health” to be readily populated with data.

The research analysed the health burdens upon adolescents from infectious diseases and also from comparatively neglected causes – injury and non-communicable diseases (NCDs). In many low- and middle-income countries – and particularly in sub-Saharan Africa – adolescents face a combined ‘triple burden’ of these causes at high levels. This is against the context of rising youth populations. The adolescent population, defined as 10-24 year olds, is currently the largest in history – at 1.8 billion in 2016. The majority (945 million) live in low-income countries, and this ‘youth bulge’ is particularly prominent in Africa and India.

Globally, health burdens such as obesity are on the rise and, as data from the WHO has also recently highlighted, road traffic injury remains far too high.

Overall the research, which follows previous reporting from The Lancet Commission on Adolescent Health & Wellbeing, shows a significant shift of the overall burden of disease affecting young people moving from infectious to non-communicable diseases. Rising levels of obesity across the world mean that enabling active travel, such as policies and infrastructure for safe walking and cycling and addressing environmental risks such as air pollution from vehicle emissions, need to be prioritised. With road traffic injury the leading killer of young people globally, a comprehensive focus is needed on ensuring safe and healthy streets.

Based on data from the comprehensive Global Burden of Disease (GBD) study, the report uses a special measure known as a DALY (Disability Adjusted Life Year), to measure the full impact of different health burdens – combining injury or ill-health and death. The report focuses on injury more broadly as a category rather than providing a specific road traffic injury breakdown.

The study categorises all countries into one of three groups. These range from ‘multi-burden’ countries with a triple burden of health problems which include high levels of communicable diseases, to ‘injury excess’ and to ‘non communicable diseases’. Despite general shifts, the actual numbers of adolescents living in ‘multi-burden’ countries increased by 250 million between 1990 and 2016. The remaining ‘injury excess’ countries are clustered in northern sections of Latin America, Central Asia and Russia, as well as Thailand and Vietnam.

Globally, the prevalence of injury DALYs is three times higher for males than females. Boys had 75% of DALYS due to injury. The high burden of disease from injuries affecting teenage boys, which includes road injuries and interpersonal violence, suggests that this also needs to be prioritised. The study highlights key inequities - despite massive investment and strong progress in education systems over the past decade, still only around half of young people globally complete secondary education. And despite gender-parity in completion rates overall, a higher proportion of young women in many of the poorest ‘multi-burden’ countries, are not in education, employment or training.

The Child Health Initiative, with the FIA Foundation as its convener, is advocating for increased action on adolescent health, calling for a Global Summit on Adolescent Health. Organisations including Plan International, UNICEF and the WHO are also stepping up work to call for a greater focus on adolescent health.

Click here to read The Lancet report ‘Progress in adolescent health and wellbeing: tracking 12 headline indicators for 195 countries and territories, 1990–2016’.