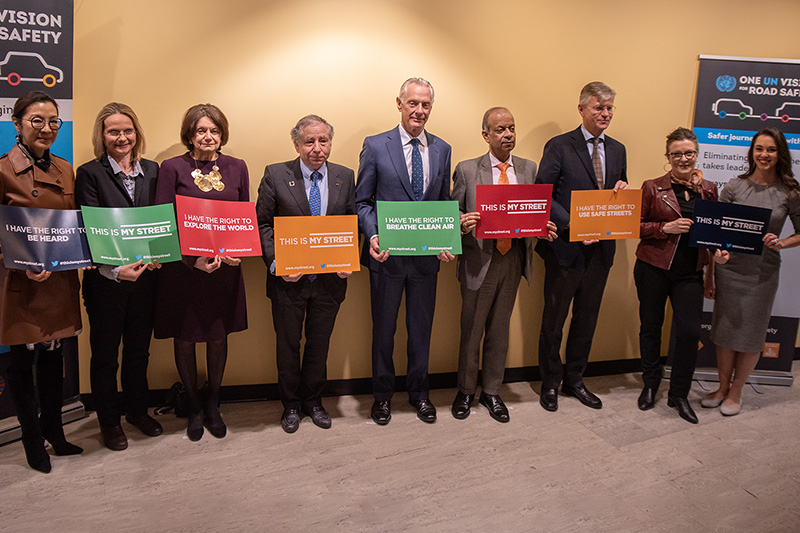 UN leaders support the This is My Street campaign. 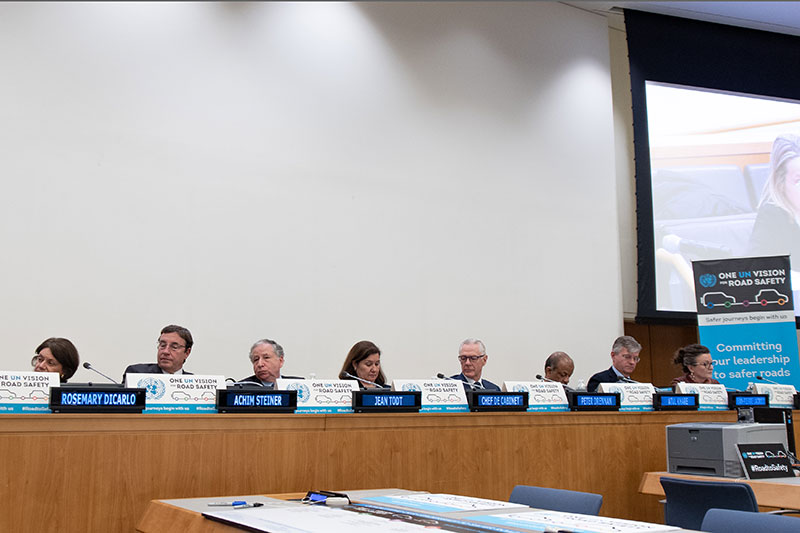 UN high level leaders’ panel answering how the strategy is significant to each of their departments within the UN. 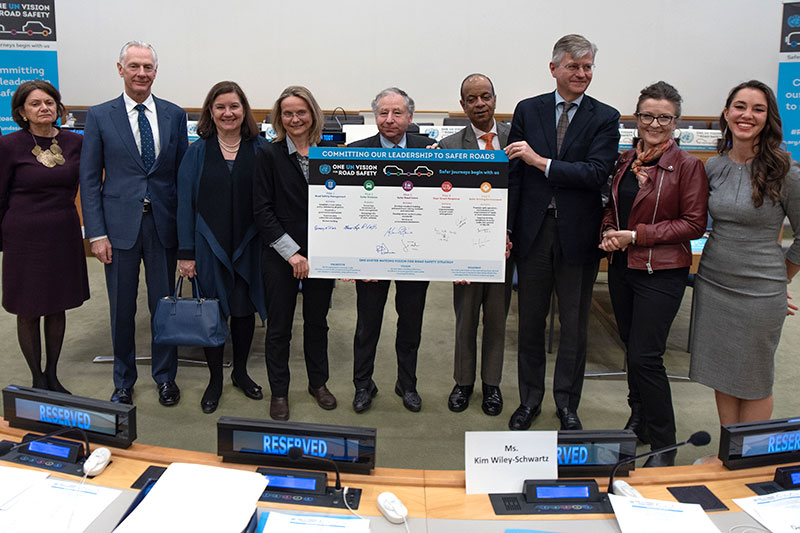 UN leaders signing the Road Safety Pledge to show their commitment to delivering the strategy. (above and below) 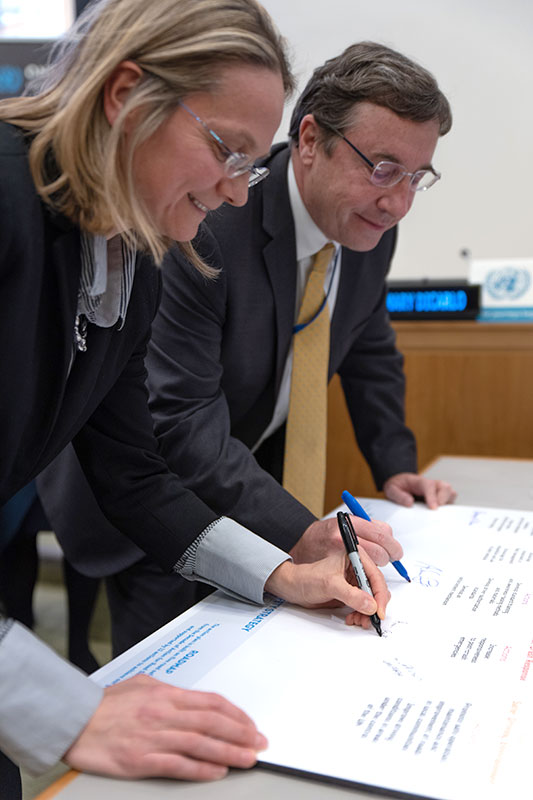 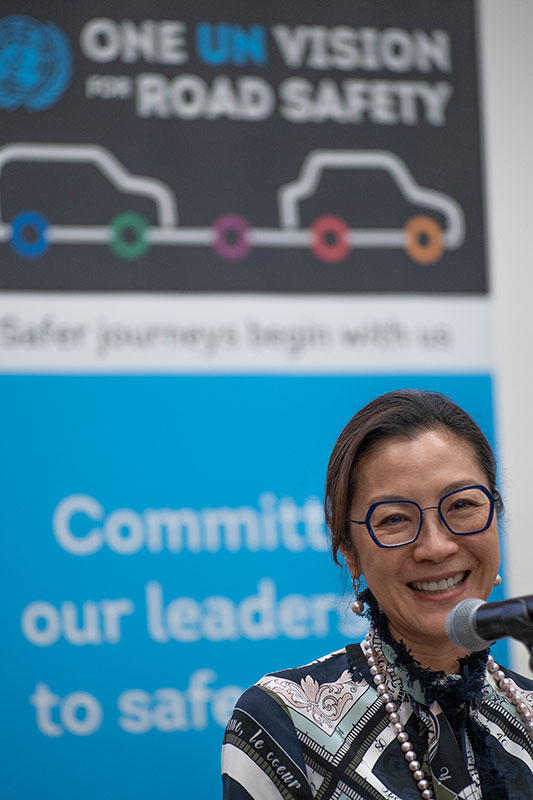 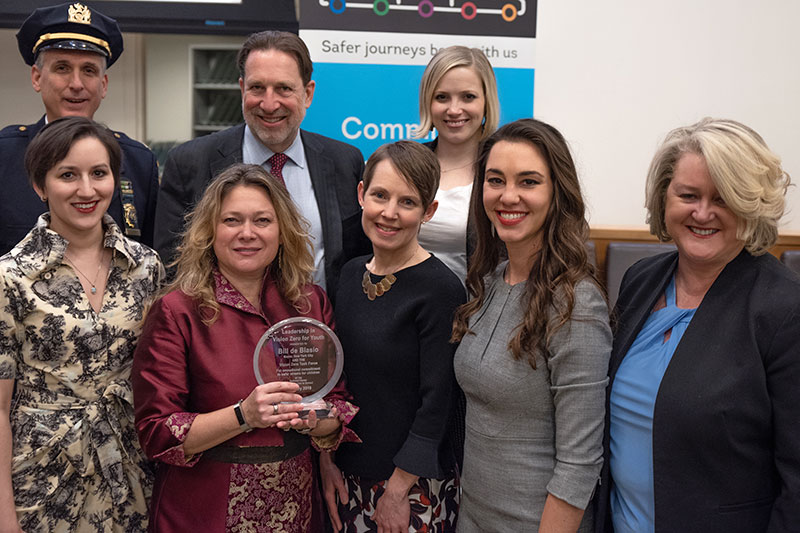 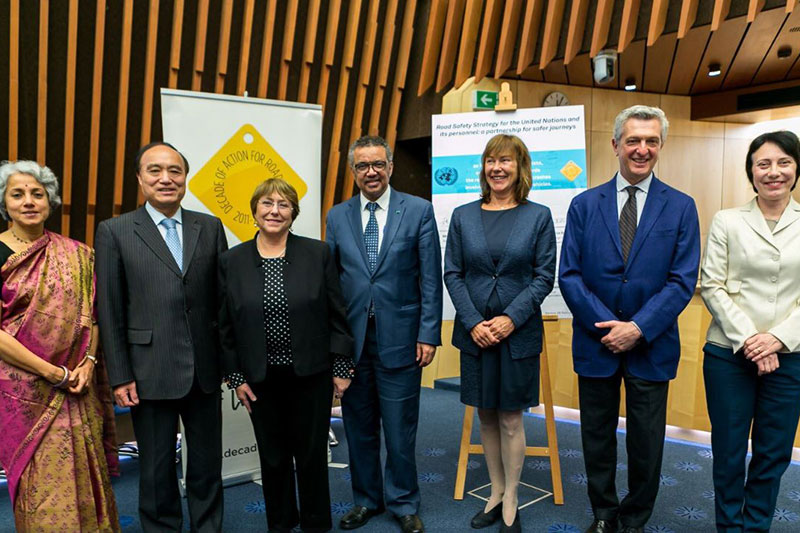 The United Nations launched its first ever Road Safety Strategy at its headquarters in New York and Geneva on the 28th February. The event included high-level representation from Jean Todt, FIA President, and UN Special Envoy for Road Safety; Michelle Yeoh, United Nations Development Programme (UNDP) Goodwill Ambassador; and Peter Drennan, Under-Secretary-General for Safety and Security. Entitled ‘A Partnership for Safer Journeys,’ the strategy is based on the safe systems approach which manages the interaction between speed, vehicles, road infrastructure and road user behaviour to prevent death and serious injury.

Road traffic crashes are the leading cause of death for UN personnel which was the impetus behind the strategy formulated by the United Nations Department for Safety and Security (UNDSS). Since the beginning of United Nations peacekeeping operations close to 615 staff have died as a result of road crashes, and more than 2,845 personnel were seriously injured.

FIA Foundation North America Director and UN Representative, Natalie Draisin, hosted the New York event as the Master of Ceremonies and opened by thanking Florence Poussin of UNDSS and Rob McConnell of Fleet Forum for pioneering the strategy. She moderated a panel of UN leaders who highlighted the significance of the strategy to their organizations. Maria Luiza Viotti, Chef de Cabinet, stated, “Death or injury must never be regarded as an inevitable part of road use by UN personnel.” Peter Drennan said, “the strategy will bring a second life to previous road safety commitment and initiatives.”

UN Special Envoy Jean Todt linked the UN’s internal road safety strategy to the wider SDG target, to halve the number of deaths and injuries on the roads through SDG 3.6. Jean Todt pledged to continue to promote the strategy, “It is unquestionable that our goal should be zero.” Mr. Todt highlighted that with the help of the new UN Road Safety Trust Fund, to which the FIA Foundation made a $10 million contribution, “work will continue to support road safety projects around the world.”

Achim Steiner, Administrator of United Nations Development Programme (UNDP) shared the moving testimony of a colleague who became wheelchair-bound after a work-related crash. The account served as a tragic reminder that injuries and death can happen to anyone and strengthened the urgency for the implementation of this strategy to protect UN personnel. On the panel he was joined by Rosemary DiCarlo, Under-Secretary-General, Department of Political & Peacebuilding Affairs; Jean-Pierre Lacroix, Under-Secretary-General, Department of Peace Operations, Under-Secretary-General, Department of Operational Support; Laura Loden, Assistant-Secretary-General, UN Population Fund; and Dr Anne-Gaelle Selod, Pan American Health Organization, representing the UN Medical Directors Working Group. Mr. Khare emphasized a focus on youth, stating “Since the time peacekeeping began, close to 615 staff have lost their lives in road crashes and more than 2,845 were seriously injured in road crashes during the same period. This does not even count the number of children in host countries who died in those crashes. Every day and night I think about those children.”

Mr. Khare’s call to action was echoed by Michelle Yeoh, UNDP Goodwill Ambassador, Child Health Initiative advocate and board member of the FIA Foundation. “Traffic kills more of our youth than war or any disease,” she said. “I hope that the launch of this UN Road Safety Strategy is the first ripple effect of culture change affecting everything from vehicle procurement policies to funding for adolescent health priorities.” Speaking at the parallel launch in Geneva, Dr Tedros, Director General of the World Health Organization (WHO) said, “No child or young person should die or be seriously injured while they walk, cycle or play. We must return our streets to our children. They have a right to feel safe on them.” Filippo Grandi of United Nations Human Rights Council (UNHRC) stressed the importance of road safety declaring, “If nothing is done to address this issue, we are on the way for road crashes being the 5th leading cause of death in the world.”

Adolescent health is at the heart of the FIA Foundation’s focus at the UN. Natalie Draisin stated, “Our Child Health Initiative delivers on the Habitat III New Urban Agenda, prioritizing a safe and healthy journey to school. We are calling for leaders to uphold their moral obligation to protect our youth, at a first-ever UN Summit on Adolescent Health. The broader scope of the Summit would recognize the importance of strengthening cross-cutting partnerships, and the inter-linkages between the SDGs. It fits perfectly with this strategy, breaking down the silos and showing how the UN can lead by example.” Participants were encouraged to join the many leaders and ambassadors who have already lent their voices as allies to our youth, by visiting mystreet.org.

Many of the best practices in the UN’s strategy are shared by New York City Mayor, Bill de Blasio, who was recognized for his outstanding efforts through the Vision Zero for Youth Leadership Award. “The award encourages cities to prioritize safety for young pedestrians and bicyclists with the goal of eliminating fatalities,” said Nancy Pullen-Seufert, Director of the National Centre for Safe Routes to School, which runs Vision Zero for Youth in the US. Presenting the award to NYC transportation officials, she added, “New York City’s Vision Zero Task Force shows the power of the safe systems approach, and collaboration between organizations ─just as we are seeing today here at the UN.”

If you would like to watch the event, please click here and you can read the UN Road Safety Strategy here.