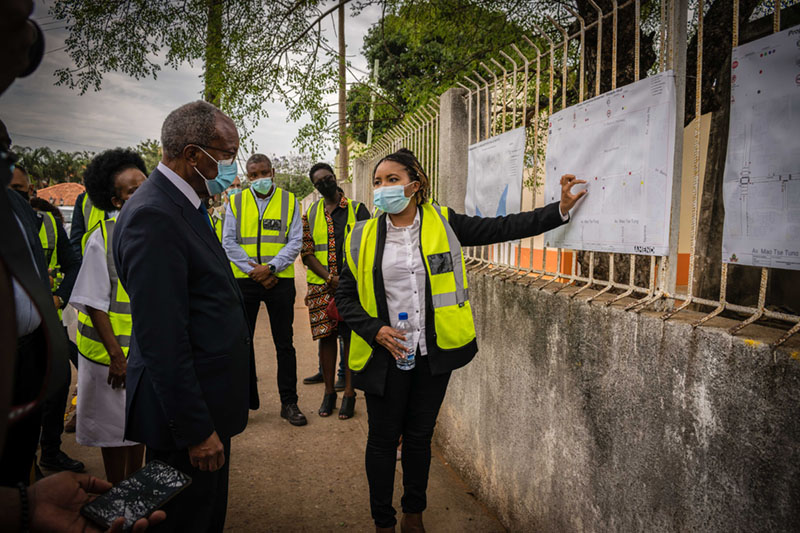 The life-saving improvements are explained to Eneas Comiche, President of Maputo Municipal Council. 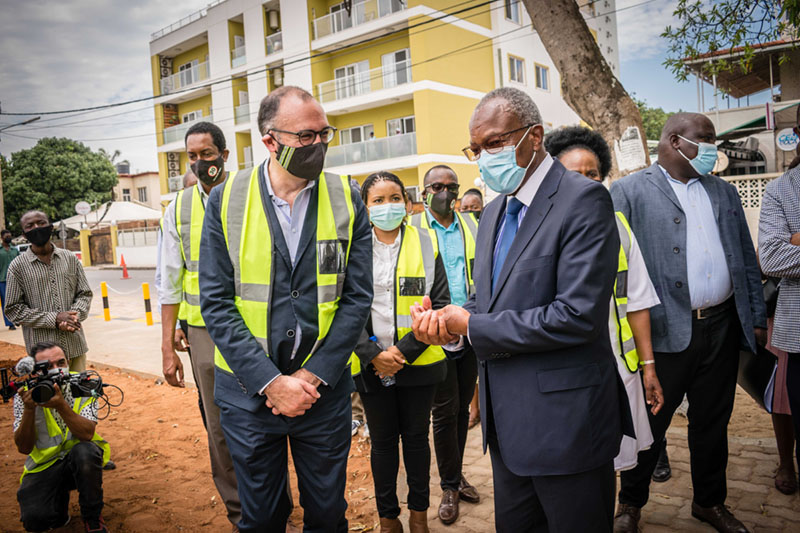 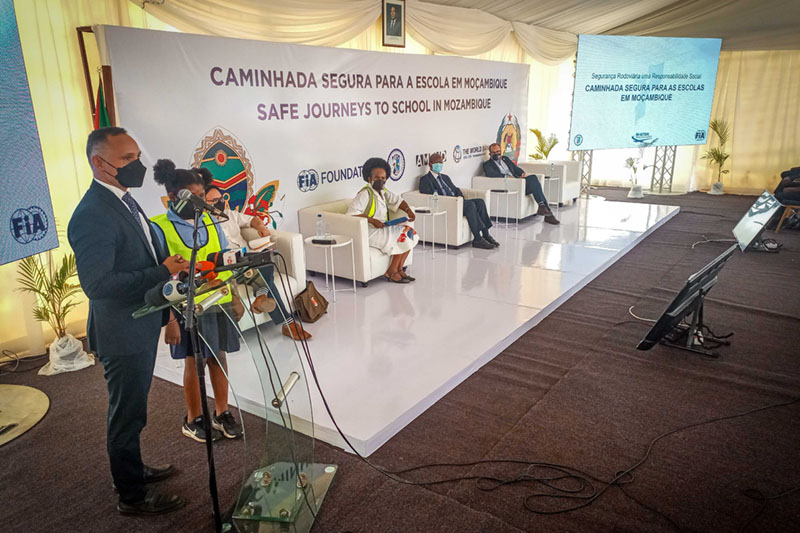 Former pupil of the school, Rodrigo Rocha, President of the Automobile & Touring Club of Mozambique, speaks alongside a current student at the press conference. 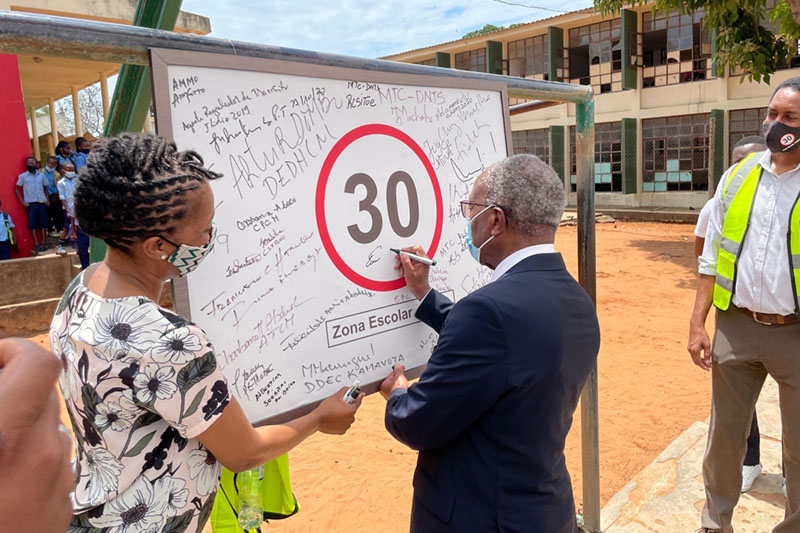 Child pedestrians are among the highest-risk groups in Mozambique for road traffic injuries, the leading cause of death for children over the age of five in the country. Unlike their peers in developed countries, the vast majority of school children in Mozambique walk to school, and they usually do so unaccompanied by an adult. A child in Africa is twice as likely to die on the roads as a child in any other region of the world.

Fortunately, ways to prevent these injuries are well understood, and include separating children from traffic and slowing vehicle speeds where children and traffic interact.

A Luta Continua Primary School in Maputo is located, along with several other schools, near a major intersection (the intersection of Kim Il Sung Avenue and Kwame Nkrumah Avenue) where vehicles travel at high speeds and in dangerous proximity to child pedestrians. Many children from these schools have been injured in traffic in recent years.

That is why the government of Mozambique – represented by the Maputo Municipal Council; the Services of Social Affairs, Maputo City; Maputo City Government; INATRO (National Institute of Road Transport); ANE (National Road Administration) and; the Mozambique Road Fund – the World Bank, the FIA Foundation, ATCM (Automovel Touring Clube de Mozambique) and the non-profit Amend have joined forces to deliver these new lifesaving infrastructure improvements and speed regulation changes around A Luta Continua Primary and neighbouring schools.

After consultations with members of the school and the community – including pupils and teachers – and the Maputo Municipal Council, improvements including footpaths, speed humps, zebra crossings, and more were designed and installed around and near A Luta Continua primary and neighbouring schools over the last several weeks. Additionally, speed limits have been reduced to 30km/h around the schools. These are all measures that are proven to prevent road traffic injuries.

Eneas Comiche, President of Maputo Municipal Council joined Saul Billingsley, Executive Director of the FIA Foundation; Rodrigo Rocha, President of ATCM (himself a former student of the school), Texel Cossa, Country Manager of Amend Mozambique and Amend board member Dr Alex Guerrero along with students, members of the community and many others came together to cut the ribbon on this new infrastructure and life-saving speed regulation for children.

Eneas Comiche, President of Maputo Municipal Council, said: “This opening act that we are celebrating here today at A Luta Continua primary school will be registered in our memory as a milestone – the first step taken in the process of transitioning school areas in the city of Maputo to safe areas, reducing accidents that often involve children and teenagers on their journey to and from school.”

The infrastructure improvements, speed regulations, and ribbon-cutting event at A Luta Continua Primary School are intended to highlight the kind of improvements that are being designed and built around schools in Mozambique on road projects financed by the Work Bank. All of the partners in this project at A Luta Continua primary school are working together on World Bank financed projects – such as the ongoing Integrated Feeder Roads Development Project and the proposed Safer Roads for Socio-Economic Integration in Mozambique (a 10-year, multi-phase rehabilitation of the N1 North-South corridor) – to help ensure that children across Mozambique can benefit from the same life-saving measures that have just been put in place around A Luta Continua primary and neighbouring schools.

Nargis Ryskulova, Senior Transport Specialist/Task Team Leader at the World Bank said: “The World Bank very much looks forward to working with the Government of Mozambique and civil society partners to help make sure that children are protected across Mozambique with the kind of pedestrian-safe infrastructure that has just been installed at A Luta Continua primary school in Maputo. Safe infrastructure saves lives.”

Saul Billingsley, Executive Director of the FIA Foundation said: “Every child should have the expectation and right to walk to school without fear of road danger from speeding vehicles. Simple measures like proper sidewalks and crossings, speed bumps and enforced speed limits should be in place for every school journey. The FIA Foundation is pleased to be part of this coalition working to protect children in Mozambique.”

Rodrigo Rocha, President of the Automovel & Touring Clube de Mozambique said: “Road safety is a social responsibility and we believe that campaigns like this one are fundamental for the reduction of the high number of road traffic crashes, thus raising the awareness of the population in general and of young people in particular, instilling in them a sense of responsibility as citizens”.

Texel Cossa, Country Manager of Amend Mozambique said: “Mozambique is currently facing many road safety challenges, with lives being lost daily on our roads and with many children being injured during their journeys to school. Today we demonstrate how the provision of safe infrastructure, road safety education and enforcement will improve and save the lives of thousands of pedestrians including students, paving the way for safe and sustainable mobility in Mozambique.”