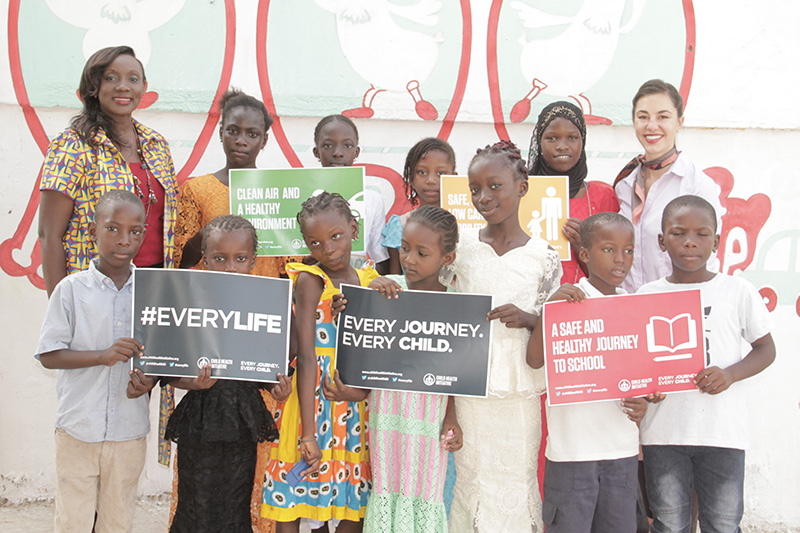 Children are joined by Awa Sarr of LASER International, who led the project with Amend to implement the #EveryLife Declaration. The #EveryLife campaign recognizes that children have the right to have their voices heard, demanding safe and healthy journeys to school. 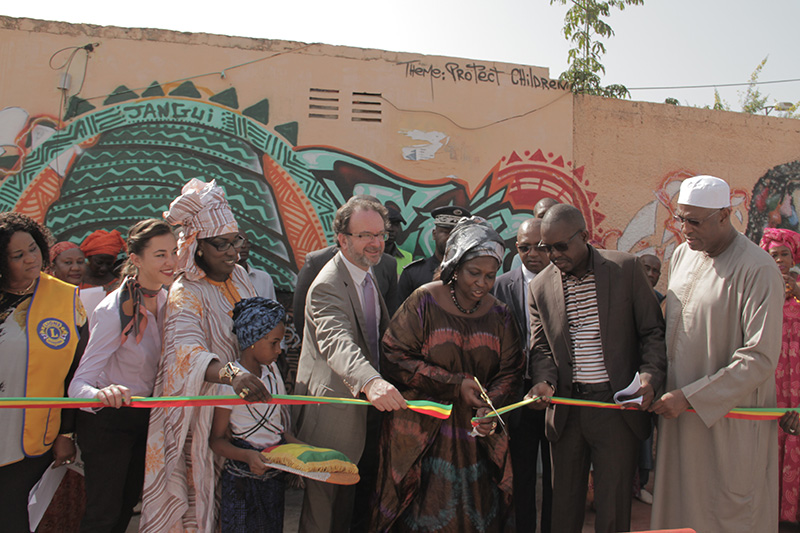 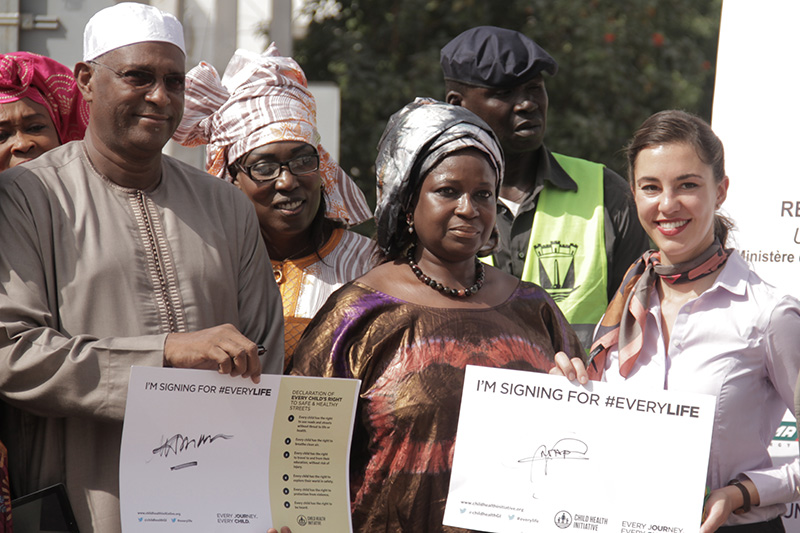 The President of the High Council for Social Dialogue and Mayor of the Commune of Guele Tapé-Fass-Colobanne in Dakar, Senegal sign the #EveryLife Declaration. 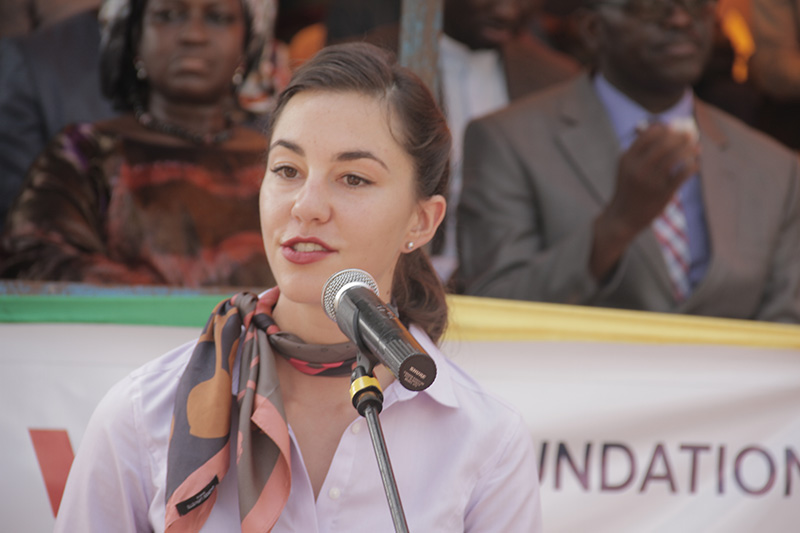 Natalie Draisin addresses government officials and thanks school children for their courage in making their voices heard. 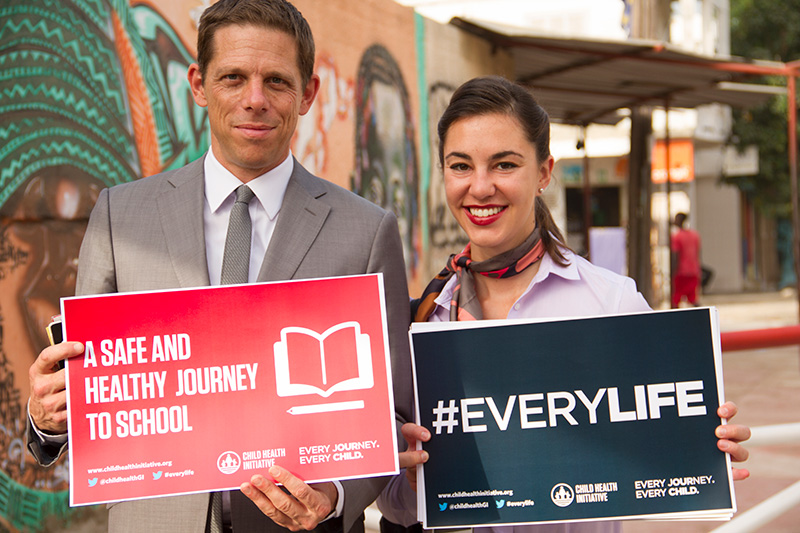 Through Amend, Jeffrey Witte has led evidence-based projects around Africa to improve infrastructure around schools.

The President of the High Council for Social Dialogue and Mayor of the Commune of Guele Tapé-Fass-Colobanne in Dakar, Senegal have signed the Declaration to Every Child’s Right to Safe and Healthy Streets, committing to safe and healthy journeys to school.

The World Health Organization estimates that 3844 people die on Senegal’s roads every year. Although 3000 children are killed or injured on the world’s roads every day, children in Africa are twice as likely to die compared to their peers in wealthier countries, and Senegal is no exception.

The solution to this social justice issue is known. Stronger road safety and sustainable mobility policies and infrastructure are necessary to protect the most vulnerable. In recognition of the need for government leadership to achieve these solutions, the President of the High Council of Social Dialogue and Mayor of the Commune of Guele Tapé-Fass-Colobanne signed the Declaration to Every Child’s Right to Safe and Healthy Streets at the Oumar Hamet Wane Primary School in Dakar, Senegal on 30 November.

They join government leaders around the world who have signed the Declaration, galvanizing commitment to the goal of the Child Health Initiative - a safe and healthy journey to school for all children. The Initiative includes the world’s leading child rights and sustainable mobility organisations, which recognise that a child’s daily journey to school is often plagued by unsafe roads and poor air quality. Research shows that it is the poorest children in the poorest areas who suffer most, and in some areas of Africa, 80% walk to school unaccompanied. With rapid motorization, Africa’s rate of child pedestrian deaths is rising, in some cities as much as 3%. Despite having the world’s lowest motorization rates, sub-Saharan Africa has some of the highest road fatality and injury rates, projected to climb as Africa develops economically.

The Declaration was signed at a high-level event which also included the Secretary General of the Ministry of Infrastructure for Land Transportation and Road Access, parents, and teachers. Together, they celebrated a partnership between the FIA Foundation, Amend, and the PUMA Energy Foundation to improve road safety around the school, where seven children have been injured in the past year.

Officials held a ribbon-cutting ceremony for two new speed humps, a zebra crossing, signage, protected sidewalk, road safety awareness artwork, and increased road safety education. The infrastructure changes are based on Amend’s prior evidence-based interventions which reduced injury rates by 26%. Amend, which led the project together with LASER International, has a history of successfully reducing road traffic injuries often by lowering speeds, which is also known to reduce air pollution. Particularly in increasingly motorized African cities like Dakar, air quality has taken a deadly toll on children’s health.

The project is one of 10 in Africa to implement Amend’s School Area Road Safety Assessments and Improvements (SARSAI) program, including Benin, Botswana, Côte d’Ivoire, Ghana, Malawi, Mozambique, Namibia, Tanzania, and Zambia. It is the first road safety program of its kind proven to reduce road traffic injury in Africa.

The President of the High Council of Social Dialogue said: “Road crashes are killing our children and jeopardizing our development and economy. They deserve safe and healthy journeys to school, free from danger and polluted air, as much as any child elsewhere in the world. It is urgent that we come together to protect our future, our children.”

Natalie Draisin, North American Director and United Nations Representative of the FIA Foundation said: “It is a human rights violation when children are at higher risk of suffering or dying on the roads just because of where they are born. Together with Amend and LASER International, we are striving to right this wrong. We applaud government leaders who have signed the #EveryLife Declaration to protecting the young, most at-risk population. As in many other African countries, over 60% of Senegal is comprised of those under 24 years old. The biggest risk they face is on our roads. Policies and infrastructure changes are necessary to protect them, and the future of Africa.”

Jeffrey Witte, Executive Director of Amend said, “We are extremely grateful for the FIA Foundation and Puma Energy Foundation’s support for Amend’s work to save children’s lives on Africa’s dangerous roads. In particular, their support of evidence-based projects that take the long view of how to sustainably save lives on Africa’s roads is remarkable. We look forward to preventing injuries in the short term with the safe infrastructure we will deliver in this project, while also using these lifesaving measures to demonstrate to governments that they, too, can – and indeed must – act to save the lives the most vulnerable citizens on their roads: children.”

Awa Sarr, President of LASER International said, "The human, social and economic cost of road accidents is disastrous, and the loss of young lives on our roads, even more so. Every loss of a child, killed or wounded on the roads, affects the development of our country, besides being tragic for the child’s family, friends, and peers. Thanks to our partners who accompany us in this fight, we are no longer alone."