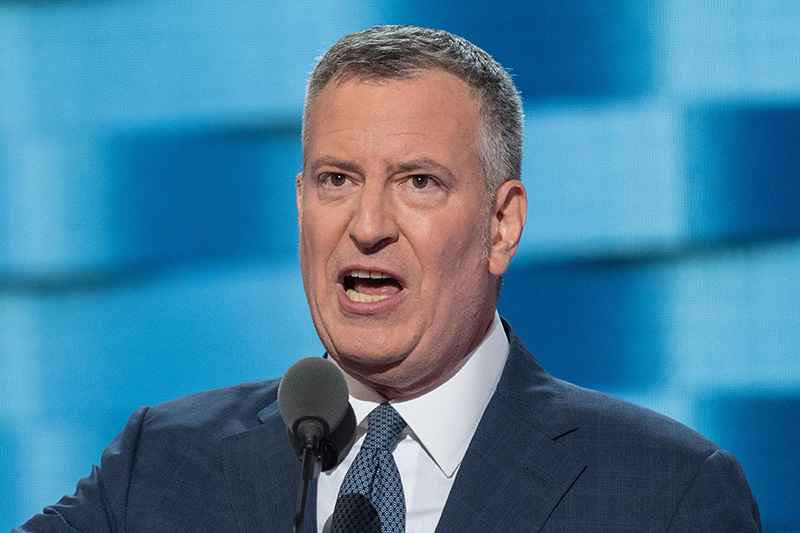 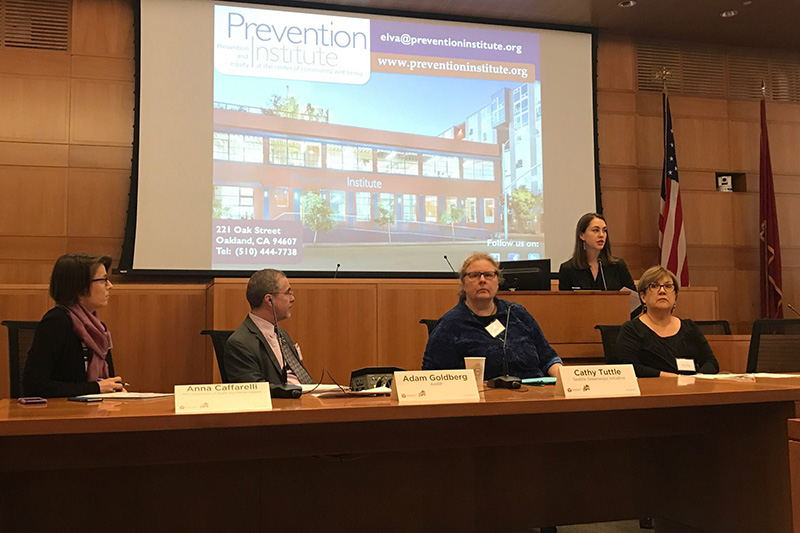 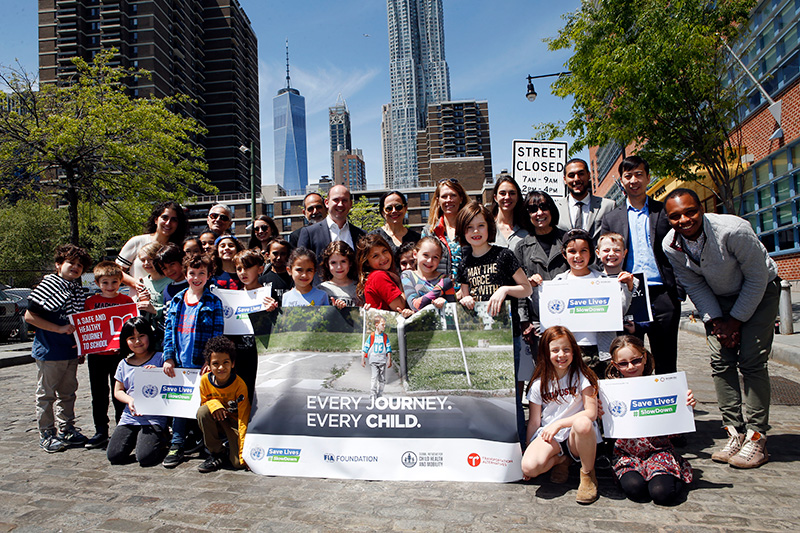 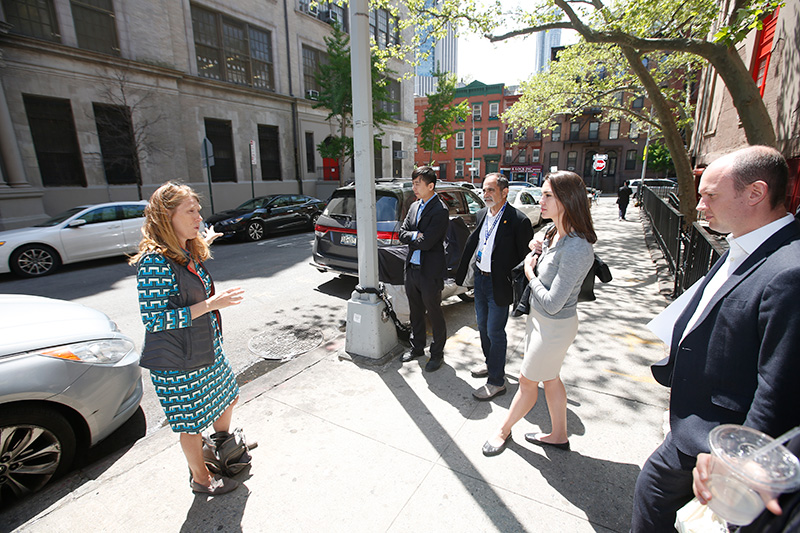 Emily Hellstrom points out the dangerous road in front of a low-income school, compared to a higher-income school where the road is open to pedestrians during busy school hours. 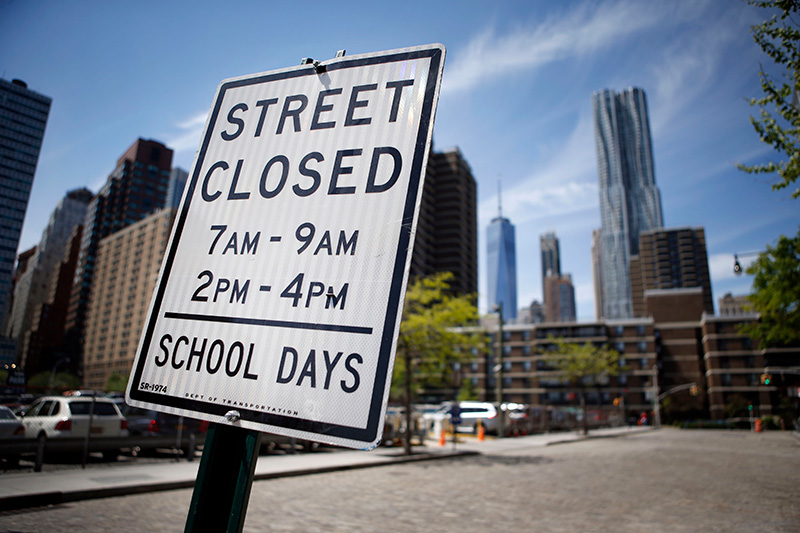 Road safety leaders from around the world gathered at the annual Transportation Alternatives’ Vision Zero Cities conference, sponsored in part by the FIA Foundation. The conference highlighted successes and challenges in utilizing Vision Zero to make city streets safer and more equitable. Hosted at Fordham Law School in New York City on 3 May, the conference featured pioneers such as Claes Tingvall, considered to be the father of Vision Zero. “Sure, we started it in Sweden,” he said, “but I have never seen so much energy around implementing Vision Zero to create a more equitable city as I see here in New York,” he said.

“Embracing Vision Zero is at the centre of developing New York City’s transportation for the future,” said Steve Hindy, board member of Transportation Alternatives which helped lower the New York City speed limit from 30 to 25. He introduced New York City Mayor Bill de Blasio, who highlighted data proving the benefits of the lower speed limit. “The lower the speed limit went,” he said, “the more lives we saved. 2016 marked the lowest fatality rate in our recorded history. We dropped 22% in 3 years.” He also emphasized the importance of protecting children. “Put the life of a child before your desire to be at your next appointment,” he said.

The need to slow down to save children’s lives was at the core of a panel moderated by Natalie Draisin, North American Manager for the FIA Foundation. At the panel, “Vision Zero in every community: The case for a health equity approach” she said, “We have an obligation to protect our most vulnerable population. We can do that through efforts like Vision Zero for Youth, developed by our partner the National Center for Safe Routes to School. It entails a commitment to Vision Zero, but points out that we should follow the data and start with those most disproportionately affected by road traffic crashes – our youth. If we start with them, everyone will benefit,” she said. Other panelists discussed the connection between equity, public health, and Vision Zero, and emphasized the need for data-driven road safety interventions. Panelists included: Anna Caffarelli, Special Initiatives Director for the Injury and Violence Prevention Program at the New York City Department of Health and Mental Hygiene; Elva Yañez, Director at Prevention Institute; Adam Goldberg, Senior Advisor with AARP’s State Advocacy & Strategy Integration team; and Cathy Tuttle who co-founded Seattle Neighborhood Greenways coalition.

Taking the discussion to the streets, Transportation Alternatives and the FIA Foundation hosted a “Reclaim the Streets” workshop to share lessons learned by the Peck Slip School in lower Manhattan, which successfully opened the street in front of the school to children during busy school hours, creating safe, car-free space for kids. “This has made a huge difference in the safety and well-being of the kids and the community. The kids love being outside and playing, and the parents can drop them off safely. Having these safe spaces is crucial, especially as we grow – we already have about 375 students, but we have capacity for around 800.” said Peck Slip principal, Maggie Sienna.

Workshop participants walked to PS1, a low-income school about 10 minutes away. “The street in front of this school used to be a one-way street, but now it’s a two-way street. It’s even more dangerous than it was before. It’s been a major challenge to open the street to children and keep them safe from cars – yet 90% of students at both PS1 and Peck Slip walk to and from school every day,” said Emily Hellstrom, Co-President of the Peck Slip Parent Teachers Association. “We see this trend all over the world,” said Avi Silverman, Deputy Director of the FIA Foundation. “It’s the most disadvantaged students who suffer from the least safe, most polluted roads. By robbing students of their safety, we’re robbing them of an education,” he said.

To protect our vulnerable, the FIA Foundation is issuing a call to #SlowDown where children live, learn, and play during UN Global Road Safety Week, 8-14 May. Lessons from around the world, including those shared at the Vision Zero Cities conference and the Peck Slip school, show that we can save children’s lives by lowering speeds.