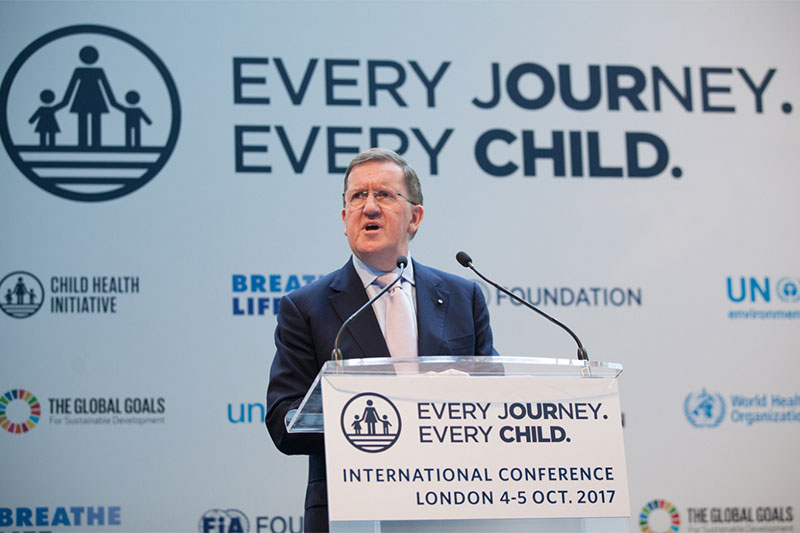 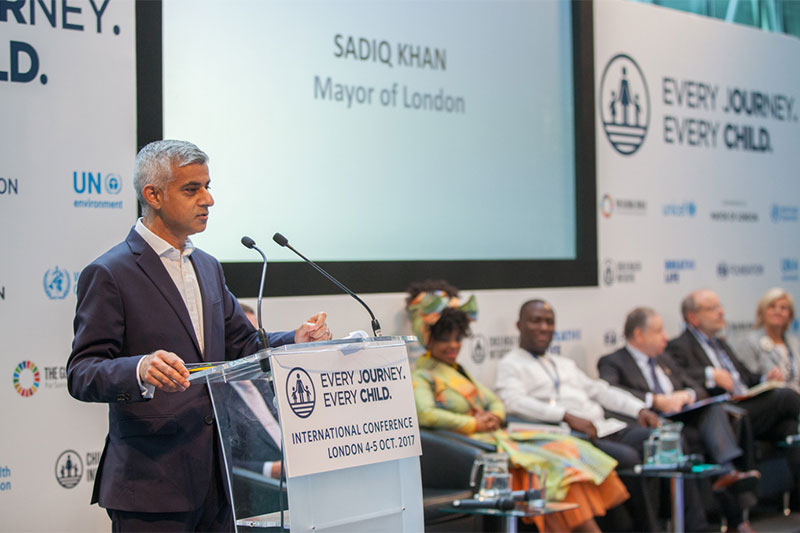 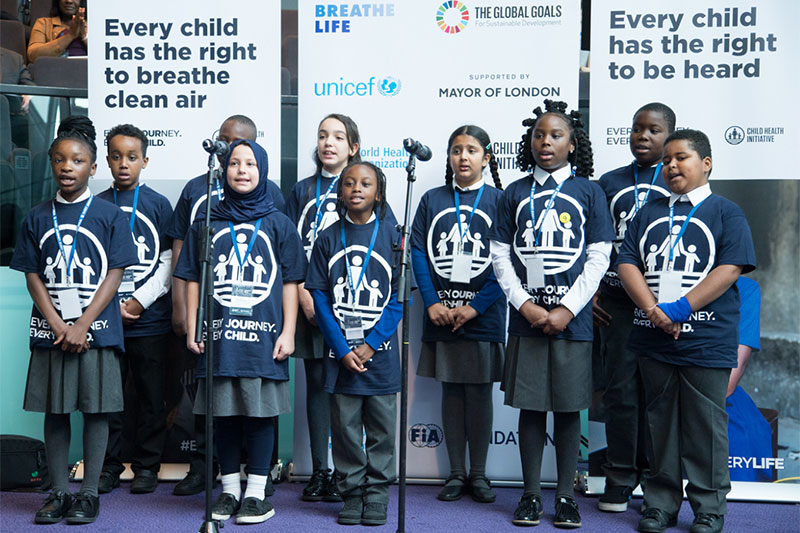 Children from a local school performed a rap song calling for clean air. 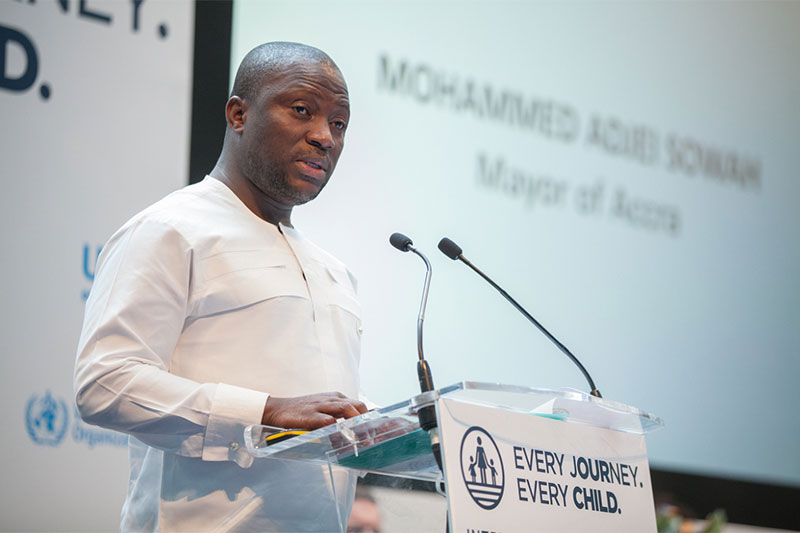 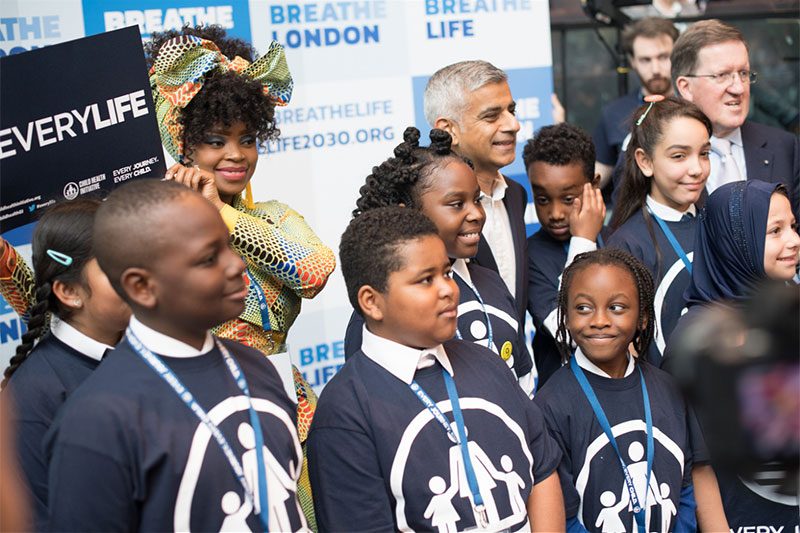 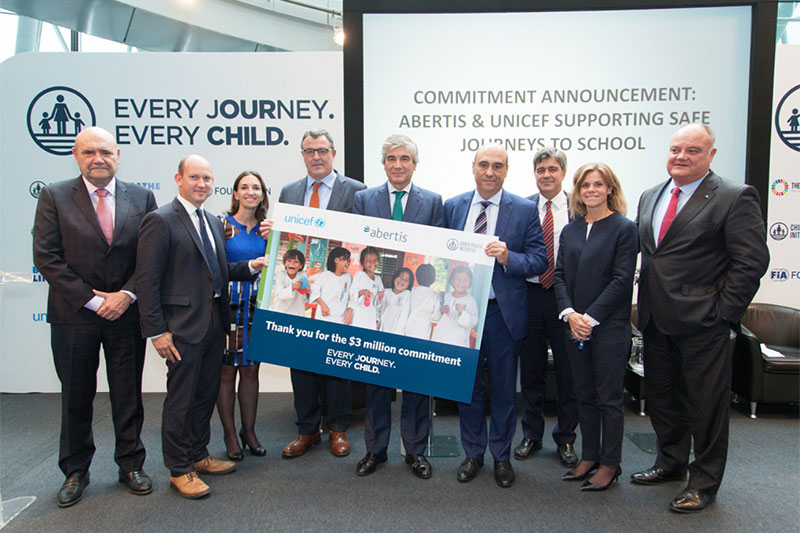 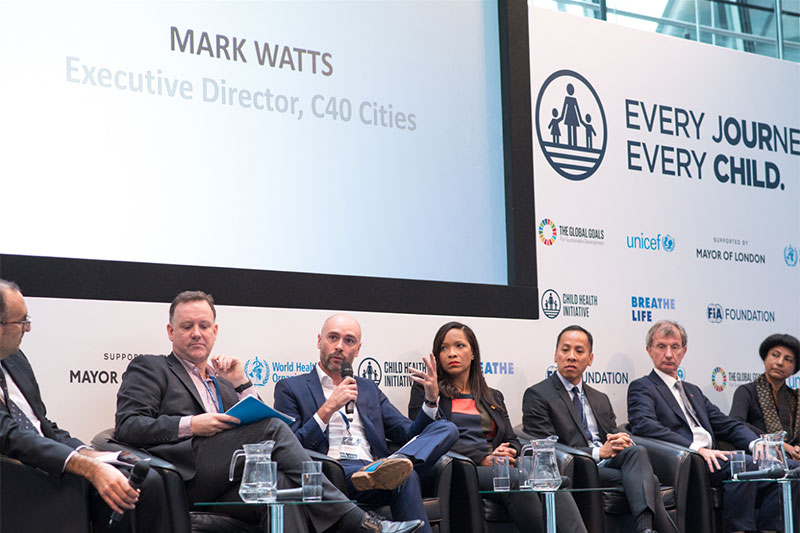 Coalition building: C40 Cities’ Mark Watts spoke alongside panellists from Save the Children, UNICEF and WHO. 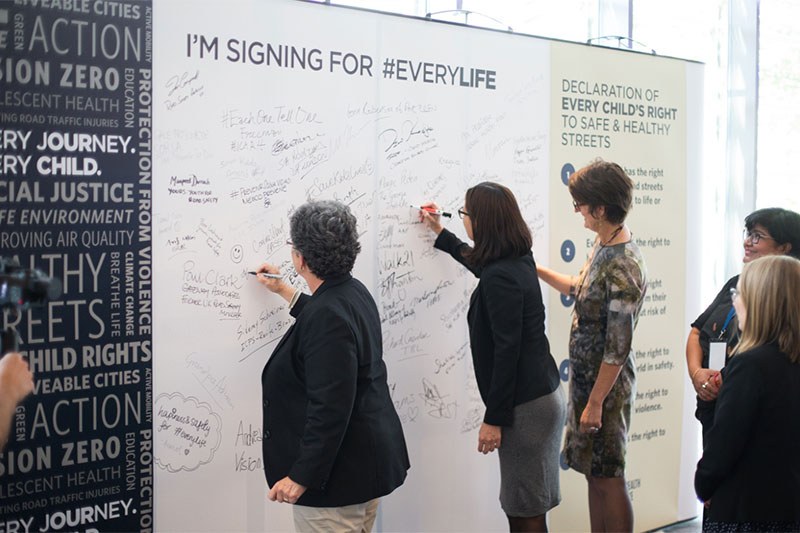 Participants signed up to the ‘#EveryLife’ Declaration of Every Child’s Right to Safe & Healthy Streets. 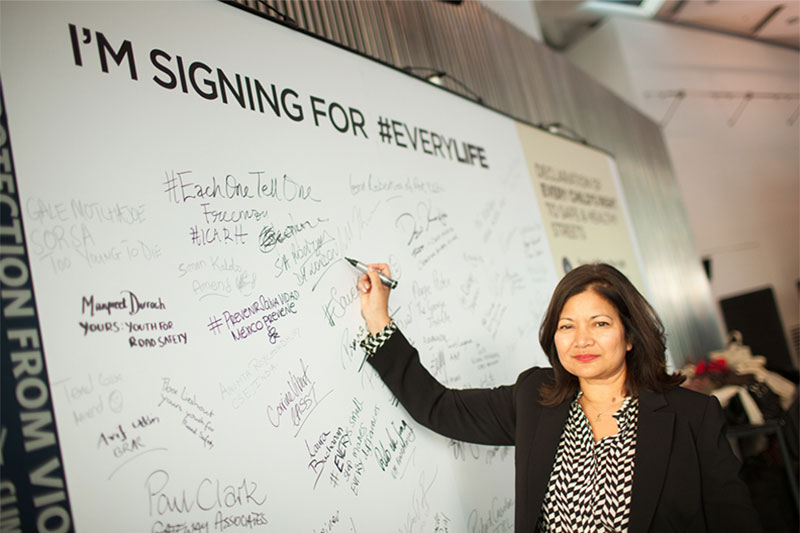 Global action is urgently required to prevent the needless deaths of thousands of children worldwide, where young lives are cut short or seriously impaired due to toxic air and unsafe streets, the Mayors of London and Accra, alongside international agencies and global experts said at the Child Health Initiative’s ‘Every Journey, Every Child’ conference at London City Hall.

The Child Health Initiative (CHI), convened by the FIA Foundation, issued the Declaration of Every Child’s Right to Safe and Healthy Streets which comprises six articles focused on protecting children from traffic related toxic air pollution and road traffic injury.

The Declaration calls for global leaders to sign up and commit to the protection of children who are currently using the world’s most dangerous streets, to ensure they are not breathing the polluted air that is especially damaging to growing lungs, and to provide a safe and healthy journey to school for every child worldwide.

Mayor of London Sadiq Khan joined the call for action and opened the Every Journey,Every Child conference, held at London City Hall on 4th October, commending the FIA Foundation on organising the event and for “doing so much to champion the cause of sustainable transport.”

He said: “It’s sickening to know that not a single area of London meets World Health Organisation health standards, but even worse than that, nearly 95 per cent of the capital is exceeding these guidelines by at least 50 per cent. We should be ashamed that our young people – the next generation of Londoners – are being exposed to these tiny particles of toxic dust that are seriously damaging their lungs and shortening their life expectancy. Air pollution and climate change transcend national borders and city boundaries. In this interconnected world, the fates of cities like London and Accra are intertwined and the only way to respond to these global problems is with global solutions.”

Children from Townsend School in Southwark, London joined the Mayor and the other high level participants at the conference. They performed a rap, calling for action on air pollution to protect their health. The school has been working with the FIA Foundation and the London Sustainability Exchange on air quality testing and schools based initiatives.

In a first contribution to the Declaration’s agenda, Mayor Khan, Mayor of Accra Mohammed Adjei Sowah, and FIA Foundation Chairman Lord Robertson signed up to the Breathe Life campaign. Breathe Life, a campaign of WHO, UN Environment and Climate and Clean Air Coalition aims to mobilize cities and individuals to protect public health and the planet from the effects of air pollution. The CHI Declaration supports ‘Breathe Life’ in its call to achieve safe air quality levels by 2030. The FIA Foundation is contributing to the campaign through its coordination of the Real Urban Emissions Initiative (TRUE - www.trueinitiative.org) which is measuring the real emissions of vehicles in London and Paris to inform policymakers and consumers.

Lord Robertson of Port Ellen, Chairman, FIA Foundation, said: “We’re facing a global public health emergency for our children. It’s taking place right in front of us, on our streets. Yet the international community is failing to respond with anything like sufficient urgency. Here, in London, we have a mayor who is listening to children and intervening to protect their health, working to curb toxic emissions and ensure social justice for every child. The FIA Foundation urges every city to take action to tackle the twin epidemics of road traffic injury and air pollution.”

“Worldwide, these fundamental children’s rights are being violated every single day. Put simply, as we send our children out on their daily journey to school we are risking their lives. They are trying to access education and we are killing them – with toxic pollution, with dangerous traffic. In the 21st century this cannot be allowed to happen. We have the solutions, we can save lives on our streets. Our leaders must step up and act. For every child, for every life.”

Also on the opening panel was UN Special Envoy for Road Safety Jean Todt. He said: “Let us not forget that at the heart of this issue are children. Children who have a basic right to step out of their front door and travel to school or to meet their friends safe from injury, safe from harm.”

The first global commitment to the Declaration was also announced at the conference. The Abertis Foundation has pledged $3million over three years to UNICEF, to support work dedicated to a child’s right to a safe and healthy journey to school. In partnership with UNICEF, the Abertis-supported programming will implement and scale up measures targeted to support children in low and middle income countries. The new programming support will build on work initiated by the FIA Foundation and UNICEF and is part of the Child Health Initiative agenda. The $3 million funding is an example of the scaling-up and resource mobilisation effort that was an objective of the initial FIA Foundation support to UNICEF. The funding represents an important step towards the Sustainable Development Goal objectives on road safety, and the aim to provide a safe and healthy journey to school for every child worldwide.

Based on the Convention of the Right of the Child, the six articles of the Declaration call for policy makers at all levels to support and implement the following priorities for every child:

Founding members of the Child Health Initiative alongside the FIA Foundation are UNICEF, UN Environment, Save the Children, Overseas Development Institute and the World Resources Institute. A range of international agencies, NGOs, experts and policy makers participated in the conference. To see the full programme, list of participants and presentations visit:

To sign up to the Declaration, and support the campaign visit: www.childhealthinitiative.org
Watch the film of the Declaration
See the video streaming of the opening conference sessions

Films, documents, photos, presentations and selected speeches from the conference are available here