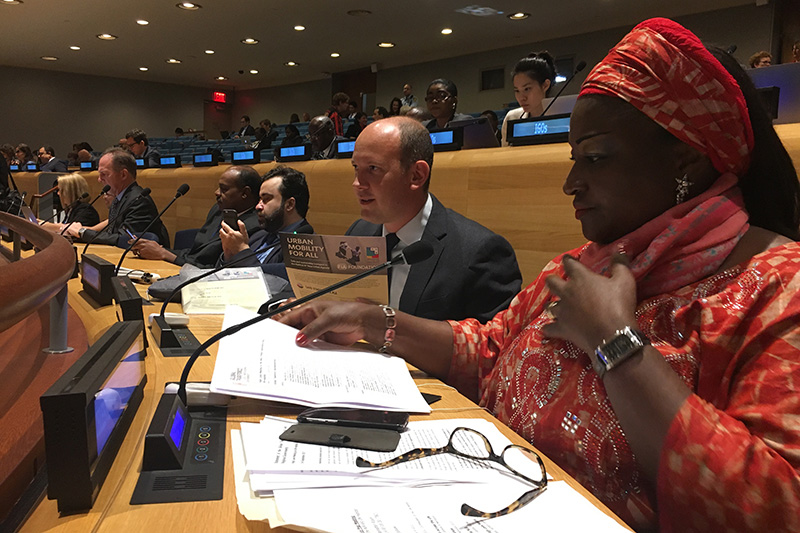 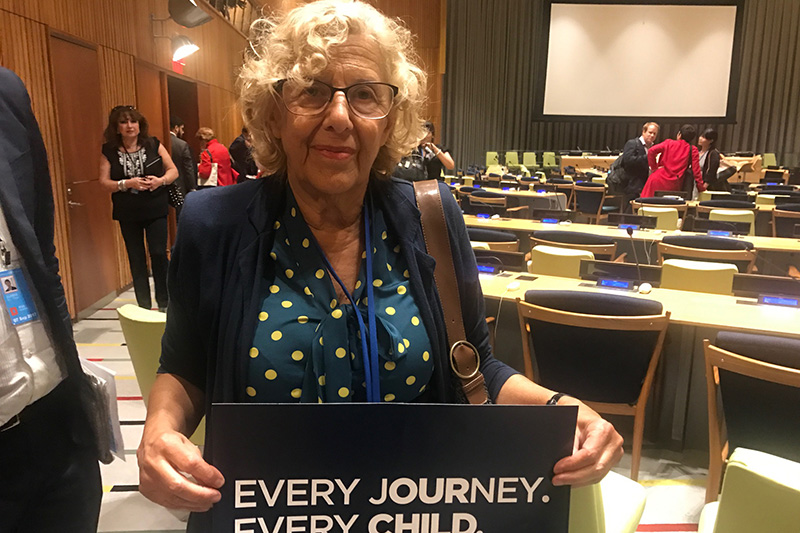 Mayor Manuela Carmena of Madrid: “It is unacceptable that so many children are being killed on the roads”.
FIA Foundation intervention at UN High Level meeting on New Urban Agenda.

The global commitment to a safe and healthy journey to school for every child in the New Urban Agenda must be turned into urgent action, a high-level meeting of the UN General Assembly was told on 6 September.

The UN session was convened to make critical assessments of the next steps needed to implement the Habitat III New Urban Agenda adopted in Quito last year. In its input to the high-level meeting, the FIA Foundation called for action to implement the commitment which had been made in Quito to promote the safe and healthy journey to school as a priority.

Speaking at the UN General Assembly, FIA Foundation Deputy Director Avi Silverman (main photo above with Mayor Célestine Ketcha, President, Network of African Local Elected Women) said: “The New Urban Agenda rightly focuses on a people centred approach to urban development, one which responds to the most vulnerable in our cities. This means we can’t ignore how the most vulnerable, our children, are facing unacceptable risks and threats to their health. We must urgently address the fact that 3000 children are killed and injured on the roads every single day, many in urban and peri-urban settings. The New Urban Agenda has committed to a safe and healthy journey to school for every child, and these words must be turned into action.”

The FIA Foundation issued its ‘Urban Mobility for All’ input at the UN High-Level meeting setting out the agenda on safe streets, clean air, and low carbon mobility.

In follow-up remarks responding to the FIA Foundation’s input and expert statements, leading panel member Manuela Carmena, Mayor of Madrid, emphasised that cities must take action on child road traffic injury. “It is unacceptable in our cities that so many children are being killed on the roads. We know how to address this issue, we must ensure that the approaches to road safety that have been developed globally are in place. This is a very important issue for urban development.”

The High-Level Meeting of the UN General Assembly on New Urban Agenda and UN-Habitat was convened by the President of the General Assembly H.E Peter Thomson. Focusing on how to ensure that cities, governments and the UN system deliver the New Urban Agenda (NUA), the meeting heard calls for a new approach to urbanisation at the UN. A new coordination body ‘UN Urban’ is likely to be established, reforming the existing UN Habitat agency.

The meeting also focused on improved links between the NUA and the Sustainable Development Goals, as well as forming effective partnerships between cities, governments, international agencies, civil society and the private sector. The FIA Foundation had been selected to provide input on partnerships for urban development with the Global Initiative for Child Health and Mobility an important example of such collaboration.

Earlier in the meeting giving opening remarks, Deputy Secretary-General Amina Mohammed called for improved partnerships and also stressed the need for sustainable mobility as a key concern for urban development.

“The proud history of urban work at the UN must be harnessed at this vital time, and the UN must be seen again as the lead convener and catalyser for partners, funders, private sector and civil society organisations to scale up their work in urban areas,” she said. “When built with low emission development in mind, cities are the safest and most efficient transport systems.”

She called for action to ensure sustainability in cities tackling key issues such as air quality, emissions and public health. “It is clear that it is in cities where the battle for sustainability will be won or lost,” she said.

The UN Secretary General António Guterres had commissioned a panel of experts to report to the General Assembly and its recommendations along with input at the high-level meeting will be taken forward by the UN.