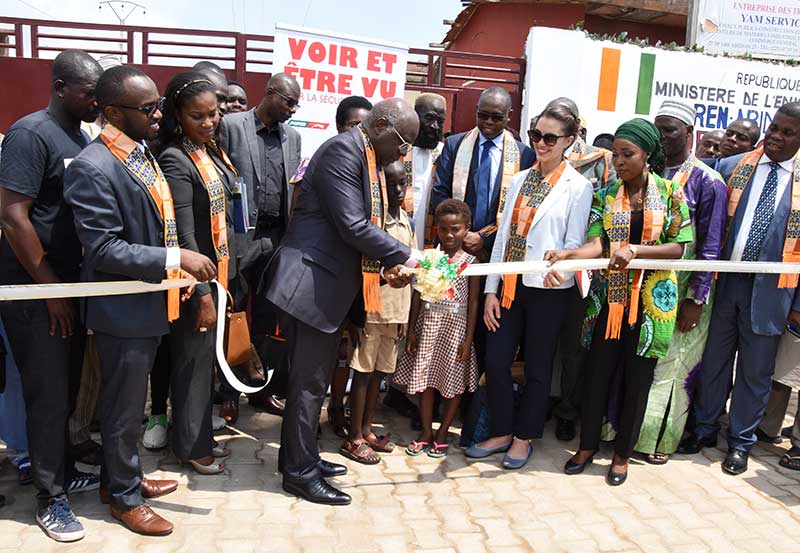 At a ribbon cutting ceremony, leaders and children welcomed the infrastructure proven to save children’s lives.

Joined by Amend’s Providence Klugan and Simon Kalolo, as well as Maferima and Massandje Yasmine Koné of OJISER, Natalie Draisin presented ‘Un Grand Pas en Avant,’ which highlights their efforts and others throughout Africa. 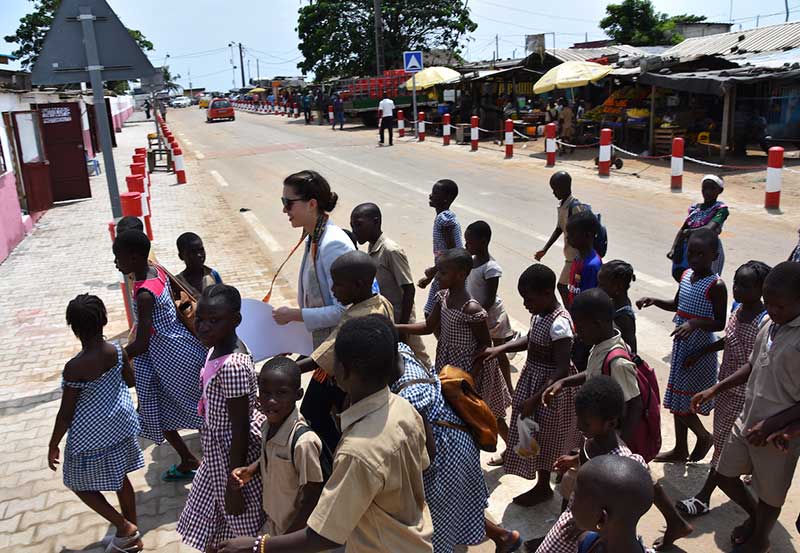 Before the road safety improvements, students would dart between parked cars to run across the road, trying to avoid being hit by vehicles. Alternatively, they would wait until a crossing guard helped them cross. The guard received an award for his outstanding dedication to protecting children. 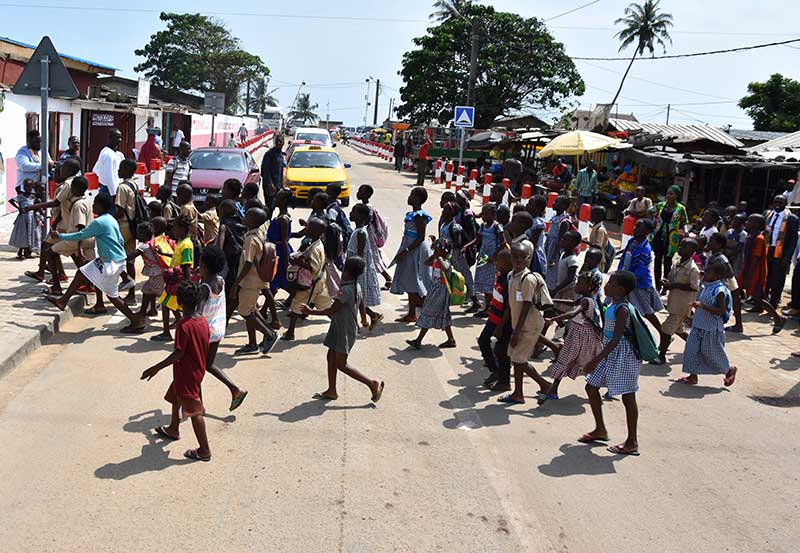 Now, children are free to cross safely while cars are forced to slow down, mitigating deadly speeds. 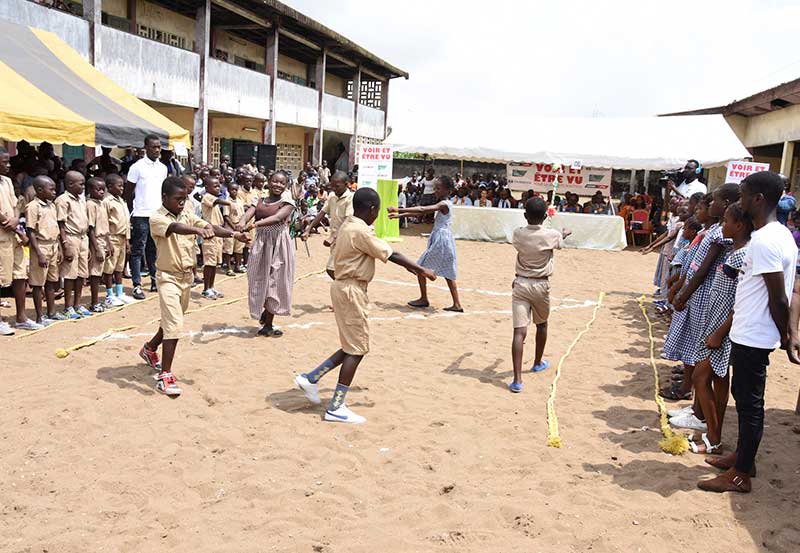 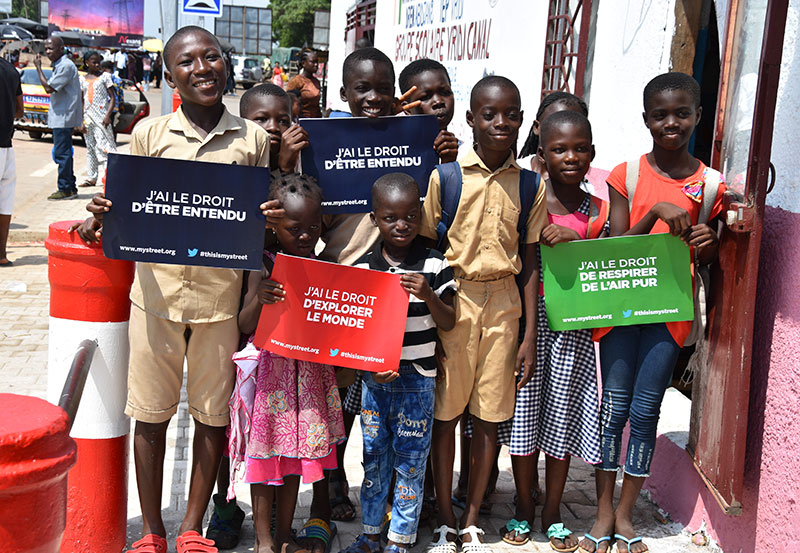 Children campaigned for their rights to be heard, to explore the world in safety, and to breathe clean air – core components of the Declaration for children’s rights to safe and healthy streets.

AMEND has launched school road safety improvements in Abidjan, Ivory Coast, as the latest in its efforts across 10 ten countries, supported by the FIA Foundation and Puma Energy Foundation. Five of the school’s 1500 students have recently suffered a road traffic injury, a number expected to go down through SARSAI, the first road safety program of its kind proven to reduce road traffic injury in Africa.

Where children once risked their lives to get to school, darting between parked vehicles and speeding traffic to cross the road, they are now protected by cost-effective infrastructure like speed humps, bollards, and zebra crossings. No longer are they invisible to dangerous traffic. At the Groupe Scolaire Vridi Canal school in Abidjan, Ivory Coast on 7 November, the community welcomed these infrastructure changes through a ribbon cutting ceremony.

The guest of honor, Mass Sarr who spoke on behalf of the Minister of Education, said “Each of these students represents the hope we have for the future of our country. Their education is not just the biggest gift we can give them, it is their right. But I see children being hit on their way to school, children being killed. Without safe journeys to school, we jeopardize our hope, our future.” He was joined the Ministry of Transport, City Council, Amnesty International, Youth Ambassador, school director, Amend, FIA Foundation, Puma Energy, OJISER, elders, religious leaders, and children.

OJISER, the local implementing partner, chose the school by surveying those with high injury rates. Amend then conducted a basic assessment to determine where interventions would have the highest public health impact due to proximity to a busy road, marketplace, or dense area, for example. They also spoke to the head teachers to assess community buy-in, leadership, and political will. After speed surveys, traffic counts, and pedestrian counts, a local engineer was hired, and baseline data was collected. Partners secured written government approval and planned for follow-up monitoring and evaluation.

To slow traffic, separate children from vehicles, and ensure their safety, Amend implemented infrastructure changes informed by School Area Road Safety Assessments and Improvements (SARSAI), evidence-based interventions which can reduce injury rates by 26%. “It took about three months to go from government approval to implementing the infrastructure. We’re very grateful to the impressive team who made this happen – many have been staying at the school overnight to ensure we met our deadline,’ said Maferima Koné, President of OJISER, the local implementing partner.

“No one has ever said no to SARSAI,” said Jeffrey Witte, Executive Director of Amend. “There is no excuse not to do this. There is no excuse not to target the highest risk schools in the most at-risk countries,” he said. Providence Klugan, Programme Officer at Amend, added, “Africa only has 2% of the world’s cars but represents 20% of crashes. This means that the chances of dying from a road traffic crash are higher in Africa than in any other region of the world. In Africa, the road traffic fatality rate is 26.6 per 100,000 people, compared with 17.4 in the rest of the world. Pedestrians in particular are the most vulnerable because there is so little infrastructure for them.”

Natalie Draisin, North American Director and United Nations Representative of the FIA Foundation said: “This implementation is part of the work highlighted in our report, ‘Step Change,’ or ‘Un Grand Pas en Avant.’ It presents life-saving efforts like these and shows the rest of the world that Africa has solutions which are lessons for all of us. This region has many isolated successes, but when we speak with one voice, we can transform these into an ocean of change.”

The event received media attention, and OJISER is planning a follow-up meeting with the Minister of Education to sign the Child Health Initiative Declaration, formalizing the city’s commitment to safe and healthy journeys to school.