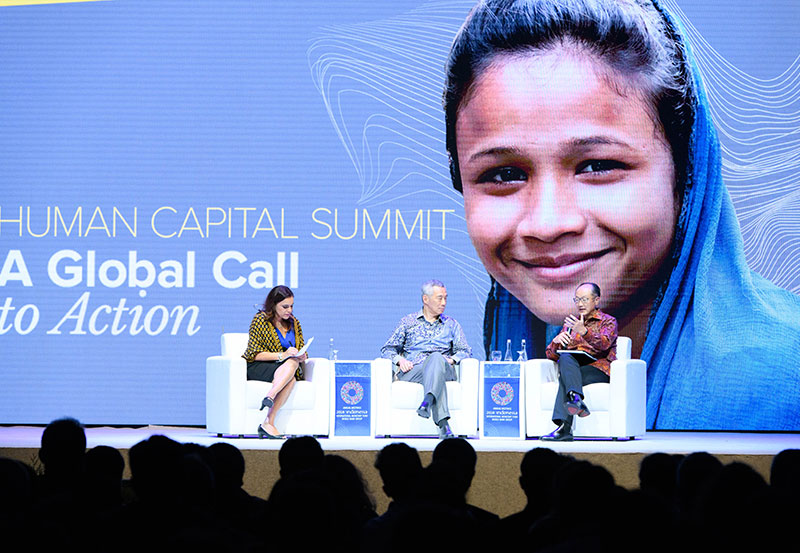 The World Bank launched a new ‘Human Capital Index’ at its 2018 Annual Meetings in Indonesia. By elevating the concept of human capital to become one of its main development indicators, the World Bank aims to put pressure on countries to invest in health and education, so that that the future workforce have the skills and capabilities needed to thrive.

The focus on human capital is built on decades of econometric analysis, which point to the connection, and feedback loops, between improved educational attainment, health outcomes, and higher incomes. There is also strong medical evidence that malnutrition and stunting cause permanent developmental impacts that limit life opportunities. It is an idea championed by the World Bank’s President, Jim Yong Kim, whose background as a doctor and academic has given him first-hand experience of the importance of health and education for people to realise their potential.

Writing in the Financial Times, Dr Kim says: “Countries with large gaps in human capital need to radically rethink how they are preparing their people for what lies ahead. Countries need a range of investments that improve outcomes, including clean air and water, safe transportation to get children to school, health clinics, and social protection to ensure that no one is left behind.”

The Child Health Initiative, coordinated by the FIA Foundation, welcomed the new emphasis on policies that put people first. It is calling for greater integration of road traffic injury prevention and action on outdoor air pollution as part of the UN Every Woman Every Child global health agenda for children and adolescents. This strategy is supported by the Global Financing Facility (GFF), based in the World Bank, which use catalytic financing to assist countries in re-modelling policy for health outcomes. Operationalising Dr Kim’s Human Capital ambitions must include GFF support for governments to re-tool their policies to ensure safe journeys to school for every child.

However to realise this, the human capital approach must not just be a way of re-framing public services – it should also extend to a fundamental re-shaping of the way that the World Bank approaches the complete range of impacts that its funding has on people’s lives – including all its large road projects.

The World Bank invests hundreds of millions of dollars in road projects globally each year. Despite advocating a ‘safe system’ approach in projects, and strengthening its processes to leverage funding from the Global Road Safety Facility to provide technical assistance for safer road design, there are still too many roads being built where road safety is inadequate.

The World Bank’s own reports estimate that, for low and middle-income countries, halving road traffic deaths could be worth 15% to 22% of GDP over 24 years. However, in practice too often new projects do not regularly consider the economic costs of injuries in their appraisal – instead time savings from faster speeds and greater capacity are often the sole factor considered.

iRAP – the International Road Assessment Programme, a non-profit supported by the FIA Foundation, has developed a comprehensive methodology for assessing the safety of roads. By observing detailed road characteristics, including design features, speed and types of road users present, it is able to give each stretch of road a safety ‘star rating’. iRAP has assessed over 1 million km of global roads in over 85 countries across the world and is working with many governments to embed road assessment into national strategy. Improving a road’s safety rating by a single star is estimated to halve the overall costs from deaths and injuries.

iRAP’s aim is for all new roads to achieve a minimum score of 3 stars or better. It estimates that achieving 75% or more of travel on minimum 3-star roads by 2030 would save 467,000 lives every year. This could be achieved by targeted investments, which would return $8 of benefits for every $1 invested. Many countries are adopting these standards and reaping the results. In Queensland, Australia, iRAP have shown that by upgrading a road from an average of 2-star to being rated entirely 4- and 5-star, resulted in an 80% reduction in deaths. The UK, Sweden, Malaysia and New Zealand have all set aims for minimum star-rating standards for their strategic road network. China has developed its own RAP programme, and India is building on successful pilots (funded by the World Bank and Bloomberg Philanthropies).

A focus on human capital should lead to a renewed focus on how to ensure people stay healthy – yet in developing countries unsafe roads are causing a huge public health burden. Road traffic injuries are the leading cause of death for 15-29 year olds - at a crucial time when they should be accessing education and developing practical skills, tragically, thousands are killed. iRAP’s ‘star rating for schools’ assessment tool for local street design, now being piloted in several countries, could bring to practical reality Dr Kim’s call for action on safe journeys to school.

There are also policy instruments that provide a mandate for action. In November 2017, following a request by the General Assembly, the United Nations agreed 12 voluntary Global Road Safety Performance Targets. These include aims that all new roads should meet technical safety standards, and specific references to the iRAP three star standard and the objective that by 2030 more than 75% of all travel should be on roads that meet these standards. In October 2018, the World Bank published its new Environmental and Social Framework, which includes further Guidance Notes to help explain the requirements of its Environmental and Social Standards (ESS), which were previously revised in 2016.

The note on ESS4: Community Health and Safety includes information relating to ‘Traffic and Road Safety’, and sets out further information about important safety issues to be considered, including ‘aspects of the project design, such as junction layout, alignment, road signs and signals, provision of pedestrian footways and crossings, barriers (for pedestrians and vehicles), median layout, and access to public transport’. These are exactly the types of features that the iRAP star rating covers – and for which the star rating is able to provide an evidence-based accountability measurement for interventions proven to have an impact.

The release of the World Bank’s new Human Capital Index, which includes mortality rates as a key component, is a timely reminder that there is still a long way to go to bring down the numbers of lives lost on the world’s roads. The World Bank must properly value the full costs of roads, and ensure that investments in safety are systematically prioritised. Such road safety investments are vital for securing a country’s long-term human capital and path to social equity and prosperity.