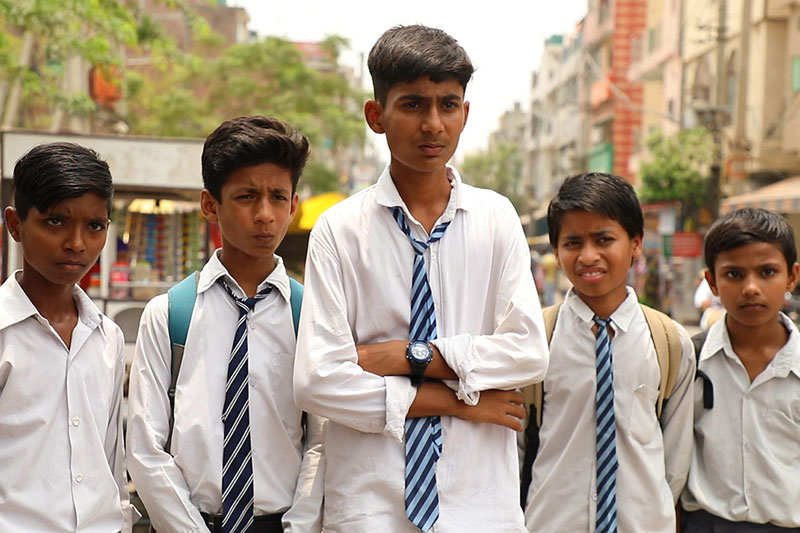 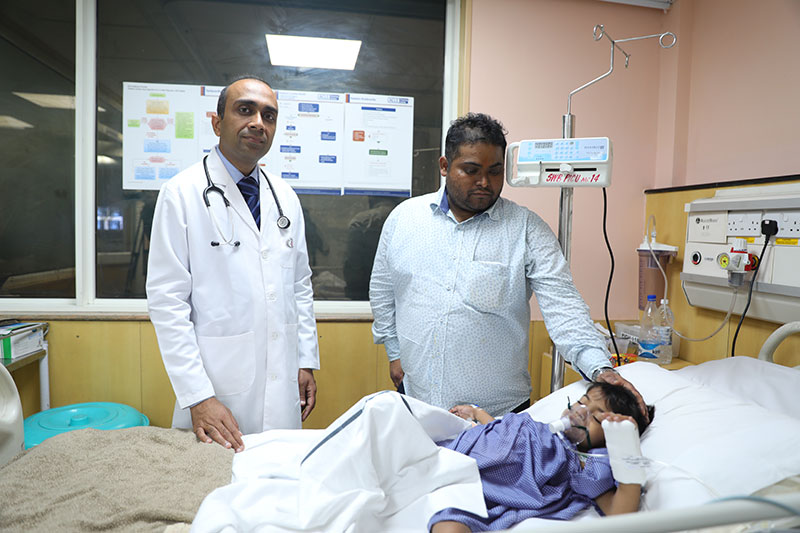 Dr. Neeraj Gupta joins a concerned father at the bed side of his two year son who was admitted to intensive care with severe respiratory difficulties. 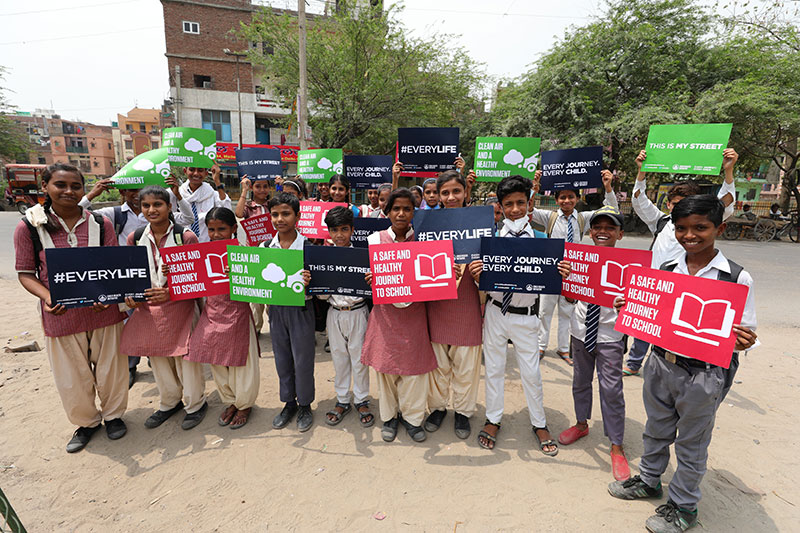 School children support the #EveryLife campaign, calling on governments to step up and deliver safe and healthy streets for all young people.
Kevin Watkins calls on the international community to act on road traffic after witnessing children battling life threatening injuries in Delhi’s hospitals.
Kevin Watkins meets with Dr. Prasad at the bedside of Rohit, 16, who is fighting for his life after a hit and run crash.

The impact of road traffic on child health has been highlighted by Save the Children UK’s CEO Kevin Watkins during a fact-finding visit to Delhi for the Child Health Initiative.

The depth of the global health crisis caused by road traffic is recognized but the international community is failing to act. For children and adolescents, 350,000 deaths a year are attributable to road traffic through injury or the effects of breathing toxic air, as revealed earlier this year by the Child Health Initiative report Unfinished Journey. For adolescents, road traffic is the leading cause of death globally with millions more young people suffering life-long health impacts due to living in car dominated environments.

India is a country on the front line of this global epidemic. An estimated 25,000 children and young people are killed every year as a result of road traffic injuries, while 65,000 deaths are attributable to outdoor air pollution from particulate matter from a variety of sources, including vehicle emissions.

In Delhi, the conflict between rapid motorization, urbanisation and the city’s inhabitants is laid bare. The dangers children face every day are explicit; little or no infrastructure to protect them from traffic; a public transport system unable to cope with demand and often unsafe for young women and girls; a reliance on cars that brings the city to a poisonous gridlock leading to emergency school closures.

Delhi saw a 40% increase of respiratory related deaths caused by outdoor air pollution in 2016. By 2018, Delhi was named as the most polluted city in the world in the WHO’s comprehensive report on global air pollution, in which 14 other Indian cities are named in the top 20. Road traffic injury is the primary cause of death for young people living in the city.

The situation in Delhi takes a magnifying glass to a global health crisis caused by road traffic, experienced by children and adolescents in rapidly developing cities around the world. Kevin Watkins said:

“Living in a city in many of the world’s poorest countries is a direct threat to the health, safety and wellbeing of children. Road traffic fumes are exposing them to toxic fumes which are destroying their lungs. When you get to the point that it is unsafe for children to walk to their schools you know that something is wrong with the transport system and what we are seeing in Delhi is putting millions of children right on the front line of risk of death and injury form being hit by motor vehicles and risk from air pollution.”

Behind the statistics are the millions of young people going about their daily routines, trying to navigate Delhi safely. Kevin Watkins spoke with a group of school boys on their way home. Mohammed Rehan, an 8th grade student explained how his leg was broken when hit by a car and that now he is afraid every day he walks to school. Fellow 8th grade student Lucky Kumar added:

During the visit Kevin Watkins met doctors dealing with the consequences of road traffic injury and respiratory illnesses caused, at least in part, by traffic pollution. On one hospital visit, Kevin met a father who had brought in his 2 year old son suffering with extreme breathing difficulties. His son’s respiratory issues where so severe, he had to be admitted to an intensive care unit and subjected to emergency surgery. Consultant Paediatrician Dr. Neeraj Gupta, who is all too frequently presented with cases such as these in the busy Delhi hospital he works in, highlighted how young lungs are so much more susceptible to the effects of poor air quality than adults. Upon treating the two year old boy, he added;

“This is one example, there are many other children, probably millions of children across the globe who are suffering from one or another respiratory disorders. They happen to small children and usually get aggravated in highly polluted cities.”

Unfortunately, it is not only poor air quality that is having a massive impact hospital admissions in the city. Kevin Watkins met with head injury specialist Dr. Rajendra Prasad at the bed side of 16 year old Rohit. A victim of a hit and run incident, Rohit is now a ventilator. His father, a casual worker, has already missed 5 days of work to be at the side of his son. Dr. Prasad explains how Rohit could be on a ventilator for months. When Rohit does wake up, there are no rehabilitation services available to help manage his life changing injuries.

Rohit will have to rely on his family for his care, which will have huge financial implications. In an instant, the future for Rohit and his family has suddenly taken a very different course. When asked about the number of serious head injuries treated at the hospital, Dr. Prasad explained that 90% are caused by road crashes, revealing the full extent of the crisis caused by road traffic for young people and their families.

In December Delhi will host the annual meeting of the UN’s ‘Every Woman Every Child’ strategy for maternal, adolescent and child health. While the strategy includes road traffic injury and air pollution in its priority agenda, specific action has not yet been forthcoming. The Child Health Initiative is calling for an urgent and commensurate response to the alarming burden of disease inflicted by road traffic.

“What is happening here is that governments and the international community is recognising the problem but then turning its back on the victims. This is why it is so important that we not only get behind the recommendations that are set out in the Child Health Initiative report, that we convene a global Summit on Child and Adolescent Health and we put in place measures that we know will save lives, will benefit the economy, will improve public health, and make the world’s cities a safer and better place to live.”