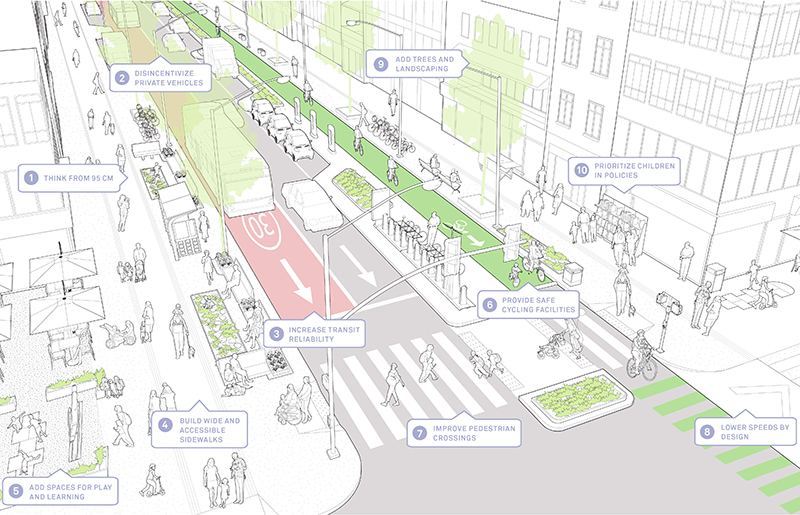 Cities can use a range of practical changes to make streets safe for all. 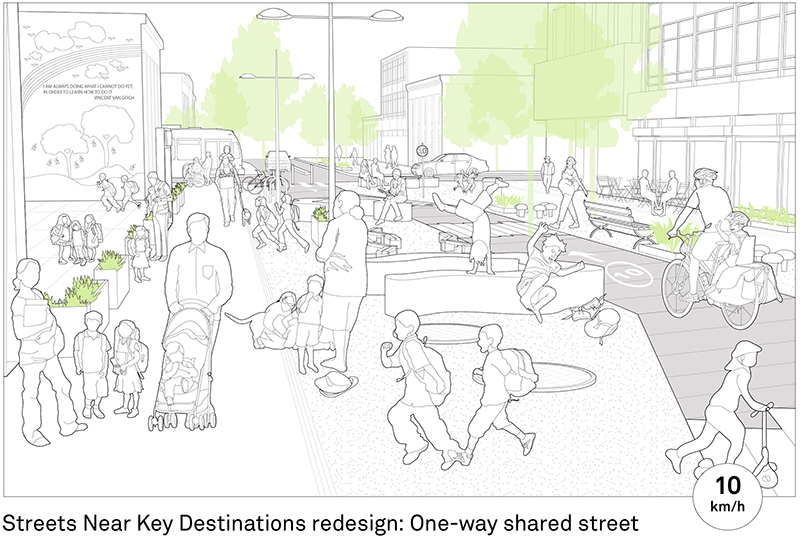 The guide explains how to design for people first, with a focus on the specific needs of babies, children, and their caregivers as pedestrians, cyclists, and transit users in urban streets. 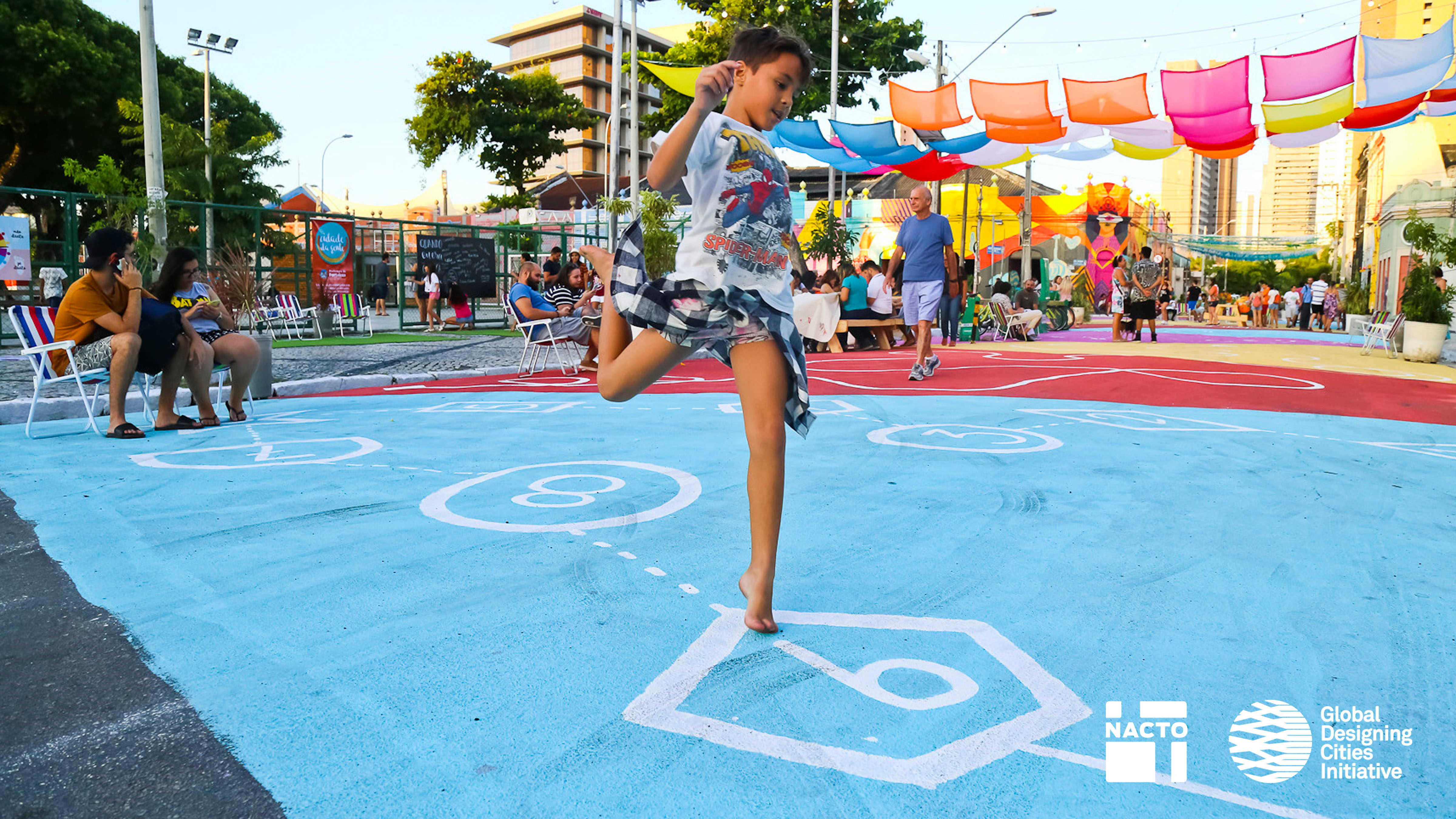 The guide explains the fundamentals of Child-Friendly Streets.

New urban design resource Designing Streets for Kids has been launched, offering practical solutions and inspiration to make streets safer and more welcoming for all and to set a new global baseline for designing urban streets by Child Health Initiative partner, the National Association of City Transportation Officials (NACTO).

Designing Streets for Kids has been developed by The Global Designing Cities Initiative (GDCI), a program of NACTO, as a supplement to NACTO-GDCI’s Global Street Design Guide (GSDG), thanks to funding from Child Health Initiative partners FIA Foundation, Botnar Foundation and Bernard van Leer Foundation, as well as Bloomberg Philanthropies.

It builds upon the approach of putting people first, with a focus on the specific needs of babies, children, and their caregivers as pedestrians, cyclists, and transit users in urban streets around the world.

Most streets were not built with children in mind, and current street conditions in many places are unwelcoming and unsafe for kids. Traffic crashes kill 1.35 million people every year and they are the leading cause of death for young people ages 5-29. Traffic congestion and vehicle designs can also contribute to dangerously high levels of air pollution, which is responsible for the death of 127,000 children under the age of five each year. Many of these fatalities are preventable, and these numbers can be dramatically reduced through kid-friendly street design.

Poor street design also has negative consequences for children’s physical and mental health. Streets that are noisy and/or hostile to pedestrians and transit users tend to discourage physical activity, which deprives children of independent mobility and opportunities to exercise and play. Offering detailed diagrams and rich graphics, Designing Streets for Kids captures best practices, strategies, programs, and policies used globally by cities from Bogotá to Moscow. The guide pays special attention to street redesigns in key places, such as schools and neighborhood streets, as well as high-traffic areas including commercial streets and intersections. With a dedicated chapter on “How to Make Change Happen,” the guide also shows how to implement and scale-up street redesign plans, highlighting tactics to engage children throughout the planning process—an often-overlooked approach that can dramatically transform how streets are designed and used.

“While urban design challenges affect all children, they are especially stark for children in low-income and historically underserved communities,” said Skye Duncan, Director of NACTO-GDCI. “Reliable mobility options and access to safe, healthy streets is a human right, and Designing Streets for Kids provides actionable strategies for ensuring equitable access to these vital public spaces.”

“Communities and schools across Africa are in desperate need of advice and support to redesign their streets to protect children and young people,” said Zoleka Mandela, Child Health Initiative Global Ambassador. “For the continent with the highest per capita, and growing, toll of death and injury on the roads for children, this guide can be a catalyst for real change.”

“Every child should have the right to use safe roads, to breathe clean air, and to engage with and participate in the decisions that will impact their future,” added Saul Billingsley, Executive Director of funder the FIA Foundation. “Cities committed to better environments for their children to play, learn, and live can use this new resource to implement child-friendly urban design. Designing Streets for Kids has the potential for universal application to build better urban spaces for all.”

“Designing Streets for Kids provides a missing voice in the fight for better, safer streets,” said Michael Bloomberg, Founder of Bloomberg Philanthropies and Former Mayor of the City of New York. “This guide builds on Bloomberg Philanthropies’ efforts to bring road safety projects where they are most needed, not only for children themselves but also for their families and caregivers.”

“With the widespread closures of schools, daycare centers, and playgrounds due to the COVID-19 pandemic, cities are being challenged to think differently about how play, learning, and social connection can continue to occur for children and young people,” said Susanna Hausmann-Muela, Chief Program Officer at Fondation Botnar. “Fondation Botnar is committed to supporting the health and wellbeing of children in growing urban environments, and we are proud to support NACTO-GDCI in their ongoing efforts to ensure that children everywhere have the space they need to explore, connect, and move safely around their environment—even in the face of crisis.”

“When we take into account the experience of babies, toddlers, and their caregivers in the planning and design of cities, we can better meet the needs of all residents and users of public space,” said Cecilia Vaca Jones, Executive Director of the Bernard van Leer Foundation. “Designing Streets for Kids empowers leaders and communities to consider their city from the eyes of a child, filling a critical gap in urban design thinking and guidance.”

“Streets designed for the safety of children aren’t just safer, they are the foundation of a city with less driving, less traffic, and less pollution,” said Gonzalo Duran Baronti, Mayor of Independencia, Santiago de Chile, Chile. This guide lays the groundwork for all street users to have healthier, happier lives."

“Urban design is the most important thing we can do to make streets safer for everyone,” said Roberto Claudio, Mayor of Fortaleza, Brazil. “Using the design principles in Designing Streets for Kids, we can start today by building streets from a child's perspective.”

"For too long, cities have ignored children’s needs and wishes, and allowed the car to reign supreme. The climate crisis, an epidemic of inactivity, and environmental degradation all add to the case for change,” said Tim Gill, Author of No Fear and International Expert on Childhood Development. “Designing Streets for Kids is a timely, comprehensive guide to creating safe,
sociable streets and neighborhoods, making cities more sustainable and livable for everyone."

As part of the Streets for Kids program, many of the global principles outlined in Designing Streets for Kids are already being applied and implemented in the cities of Tirana (AL), Santiago (CL), Kigali (RW), and Fortaleza (BR). In New York, NACTO-GDCI also supports the Fresh Air Fund’s Summer Spaces program, which uses the design principles outlined in Designing Streets for Kids to turn closed streets and open spaces into age-appropriate play spaces that employ social distancing measures—a model that can be replicated across New York City and beyond.

Designing Streets for Kids is available for purchase from Island Press and can be viewed and downloaded for free at GlobalDesigningCities.org.