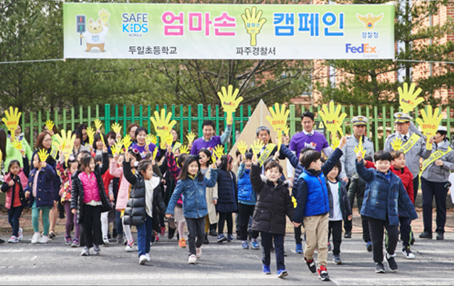 Students have to cross in front of a heavy traffic, one-way road to get to the Gumsan Elementary School in Seoul. Between 2009 and 2010 there were 89 injuries to children crossing this road and one death. Safe Kids Korea put in place traffic-calming measures such as a skid-proof pavement and directional road signs around the school and painted the school wall to increase awareness about the school zone among drivers. Safe Kids Korea also implements its signature Mom’s Hand campaign annually in March, when the highest rate of car crashes occurs. The campaign focuses on educating children as well as raising awareness for drivers about safety in school zones. The 2018 Mom’s Hand Campaign, supported by FedEx, was held in Gyeonggi Province, Incheon City and Busan Province and reached 67 schools nationwide and 8,491 students.